A History of Gowle House by Colum O’Rourke 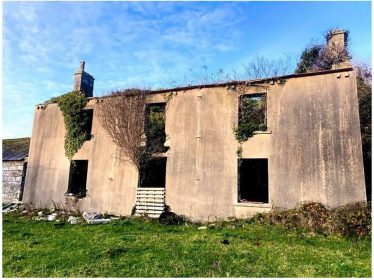 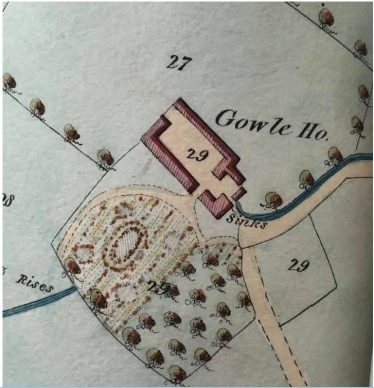 Gowle, locally pronounced by many as Gould, is a small townland bordering Killabeg, Ballyconnell, Kilquiggan and the Carlow townlands of Ballyshane and Killalongford. It is a quiet area and mostly upon a hillside, with fantastic views towards the Wicklow Mountains and Mount Leinster and into the flatlands of Carlow.

The earliest recording of inhabitants of Gowle took place in the early 1730s, with the Hume observations taking notes of the value of each townland, the tenantry and any progressions carried out by the head tenant at the time for the Wentworth (Coolattin) Estate. Hugh Jones is recorded as the head tenant on the early 1728 Moland Survey and again in 1731. The subtenants included John Jones, Edmund Dullin, Thomas Maugher, William Nowlan, Charles Byrne, Michael Hughes, John Maugher and Henry Jinkins. The Aghold Parish Records also records the 1729 marriage of Thomas Walker to Mary Paine, daughter of “James Paine of Goold.”

By 1748, the Estate Tenant Rentals highlight that “Widow Barton”, the recent wife of Rev. Thomas Barton of Aghold Parish was a principal tenant of Gowle alongside Barnaby Brian, who had taken out a lease for 24 years in 1732. With the death of Widow Barton in the early 1750s, her lease passed to John Nickson, “in the life of his son Joshua Nickson.” This branch of the Nickson family were of the Lower Killinure family that would again have further connections to Gowle House in descending generations afterwards.

Nickson held this lease for several decades and is again recorded in 1783 as holding the same lease. By the late 1790s, Robert Rhames Sr was in command of the lease for much of Gowle. The 1798 Rebellion saw the house badly affected and looted. Rhames would take a commission as lieutenant of the Coolkenno Yeomanry in the years succeeding the gruesome bloody year of 1798. Rhames’ son, Robert Rhames Jr, married Mary Sherwood, daughter of George Sherwood of Lower Killinure House and granddaughter of Richard Nickson who was assassinated in November 1797. Together they would have an immensely large family. An 1845 recording in a Dublin newspaper highlights the birth of a son. “At Goold Lodge, County Wicklow, the lady of Robert Rhames Esq, of a son – her sixteenth child.”

The Rhames Family & the Famine

Financial stress started to badly affect the Rhames Family. They were noted to have been unpleasant landlords and quite strict on their rent with their subtenants, making them very unpopular. Dozens of Gowle residents had been forced to take the Fitzwilliam assistance and flee to Canada to escape desperate poverty. The families that left Gowle included:

With economic strains and many of their tenants gone, the Rhames Family had little other option but to break their lease and leave for America also. It is believed they left for New York around 1849 as their last child to be born in Ireland, Albert Edward Rhames, was christened at St. Michael’s, Coolkenno in October 1848.

The 1850 U.S. Census shows us that the large Rhames Family were already farming a reasonable sized property in Beaver Dam, Wisconsin. Robert Rhames died in Wisconsin in 1872 and to this day, his many descendants reside across the United States.

After the Rhames’ left Gowle House, the lease went to Benjamin Burland and later to his wife Sarah Lee Burland. The Burland Family would hold the lease of Gowle House for several decades. In 1876, the farm, under the tenure of Widow Sarah Burland, was simply recorded as “203 acres and its bounds (hedges & ditches) were in bad order.” No detail is given about the house. By the 1880s, it had passed to Thomas F. Kenny, a noted friend of the Irish nationalist leader, Charles Stewart Parnell, who often visited Gowle House. Kenny was also connected to Parnell’s successor, John Redmond MP and his brother William Redmond MP through his marriage. It seems the Kenny’s came to Gowle House after an altercation with the Coolattin Estate over hunting rights. The Kenny’s were of course noted Home Rule and Land League supporters.

Today, the house stands idle and in ruin upon a working farm. Please respect that this house is upon private property and I obtained permission from the landowner to visit the site.