You are here: HomenextNew contributionsnextChallenges for retail owners - Becci Harrison explains how Fishers is coping during COVID 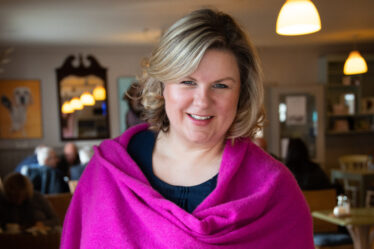 Becci Harrison of Fishers in Newtownmountkennedy

Fishers of Newtownmountkennedy is a bit of an institution in Wicklow. Founded 41 years by Becci’s parents and their siblings, it began life as a small shop and sideline selling country clothes; tweeds and oiled jackets. The clothes were often sold at agricultural shows through booths. Becci joined originally as marketing manager but after working elsewhere came back as CEO, a position she currently holds. Her parents have taken a step backwards and Becci now runs the business with her sister Charlotte.

The original country clothes outlet has expanded into the modern Fishers which is more like a boutique department store covering 11,000 square feet. Clothing is still a core product but it also offers lifestyle goods for home and kitchen and boasts a café as well as hairdressers, bedlinen store and local artists gallery. “We even have a self-catering cottage.”

In total, there are 35 staff employed between the store and the café which places a huge responsibility on Becci’s shoulders. “We could see the pandemic coming down the line. We closed a week earlier than official Ireland in consultation with our staff. It was very hard as we tried to figure out what was best for our team and our customers. It changed so fast in those early days. We’d maybe decide one thing and then the next week it would have changed again.

“Customer numbers had been dropping off during the beginning of March and then we had an experience in the café where two groups would not socially distance. It was a new word, a new term and it was a very uncomfortable experience. That decided us though, as we wanted to protect our staff. The good thing about being an SME is that we were flexible and could close once we decided it was for the best.”

It was also a scary moment for Becci as she was not to know then it was the right decision – only time would vindicate her decision. Once the decision was made, they wrote to their very loyal customers, outlining what they were doing.

“We got a great response – and a huge endorsement of our decision. That was very powerful.”

Getting buy-in from the staff was important, so too was the strong support from their customers. But Becci also needed the concessions to be okay with the decision. A decision to close caused multiple ripples. Now almost four months on Becci is opening up the business again, but still needs the buy-in from staff, customers and concessions. “There is a huge responsibility in reopening. There are guidelines – some of the manuals are like 40 pages long – but there are also many gaps that as business owners we have to figure out.

“Once we open will the public coming in every day. It’s not on office where just staff have to be accommodated but a space where people will come to shop and also eat in the café”.

“The good news is that we are in the middle of the countryside. We are not in the middle of a city and we have space. We also do not have massive footfall, our customers are spread out even before COVID. So while we have set up queueing protocols we haven’t needed them.’

The issue about different rules came into play on the size of retail shops. Smaller ones were allowed open first so Becci arranged for the layout of the shop to be subdivided. Then the rules changes and all store sizes were allowed to open at the same time. “Luckily we like our new layout,” laughs Becci. “We spent about a week intensively working on it and when the rules changed I was a bit cross at first. However, as I say I like the new format so it’s all good in the end.”

There is a one-way system set up in the store, signs are everywhere with loads of hand sanitizer available. There are even masks for use or purchase in the store – masks that have been garnering positive attention for their comfort. Becci had surveyed her customers before reopening. It turns out her customers wanted the experience of shopping again – as per normal. She has offered private shopping appointments and the ability to shop online – but 82% of her customers wanted to come back into the store again.

Another decision made by Fishers was to leave their fitting rooms open, a move unusual in clothing stores. Becci makes it work by only allowing two rooms to be open, which are cleaned between uses, and the middle fitting room is used to store the clothes overnight, which quarantines them. The following morning all garments are steam cleaned for additional safety.

While in lockdown, Becci managed about 5% in online sales which was enough to keep a few bills paid. But now she is hoping the opening will get the business back on track again.
“Many of our customers had not been out fullstop during the lockdown. They were naturally apprehensive and we just wanted to make them safe. Some of our customers had not even been grocery shopping and so had little experience of what the new normal was like. I am glad to say it is working very well and lots of our customers are actually trying on the clothes as well – so that was a good decision on our part.”

Becci recognises that being in business is all about innovation and problem solving. “We joke that Fishers is work in progress, in evolution, and that is certainly true, no more now than during the pandemic.”