You are here: HomenextNew contributionsnextColin Tyner and his field of sunflower

Colin Tyner and his field of sunflower 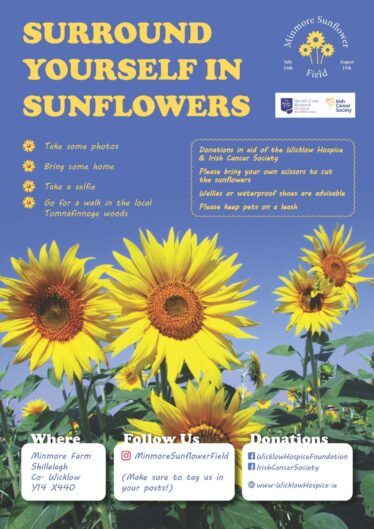 Colin Tyner, a farmer from Minmore, near Shillelagh, is growing a most unusual crop – a crop of sunflowers this year – and it is possibly the first such field of sunflowers to be grown in the Republic. Visitors to France will be familiar with the sight of acres of sunflowers as the climate is better suited to their cultivation but the Tyner field is an experiment that he didn’t even know would work. In fact, until they started flourishing last month, he told no one outside the family in case they never grew – which may have led to much speculation amongst this neighbours as to just what was growing on the sunny south-facing field.

The reason for planting the field lay in quite prosaic reasons. As a beef and sheep farmer he availed of a scheme to compensate farmers for the low beef price that meant he had to lose 5% of his animals. It also meant he had more grass than he needed and he remembered the fields of sunflowers from holidays in France.
The field selected has sunshine from morning till night and he sowed the seeds on May 2 – today July 24th – they are almost fully grown and about to bloom. Once blooming it is expected the field will be in glorious technicolour for a period of about three weeks.

“Yes, they grow so quickly and in the beginning we had an awful job keeping the crows and pigeons off as they love sunflower seeds. We had to modify a corn drill to do the actual sowing – blocking off every fourth row – so they were not as densely sown as barley or wheat.”

Once Colin had decided to sow the sunflowers getting the seeds was his biggest problem. He imported them from the UK and planted them more in hope than security. To his astonishment they grew very quickly, and the field is now just about to bloom. There are a few blooms already open but the main field is a few days off. The plants are also very tall, about six foot, and are quite dense despite the thinner planting.

Colin is inviting people to come and visit his field of sunflowers, pick some, take some selfies and then donate to two charities; The Wicklow Hospice and The Irish Cancer Society. There is path around the field which is just under 3km in length and is perfect for a nice walk. If loads of people come at once there is a field next door which they can use for parking.

“Bring your scissors as we are not allowed provide them under COVID rules. The stems are too thick to break, you will need some cutting device. And don’t go crazy – take half a dozen for your pleasure, but don’t take them all.”

From its secret beginning, Colin and his field of sunflowers are now the talk of the county. He is hoping to raise some serious money for the charities. After all there are 200,000 blooms in the field.

Afterwards, if there are blooms left over, Colin will attempt to harvest them, but it hasn’t been done before he is not sure how it will pan out. For now, it’s a bee friendly, bright yellow field on the edge of Shillelagh.

To find out more visit Instagram and search for Minmore Sunflower field and the address is Y14X440.