You are here: HomenextNew contributionsnextDanny O'Brien - comedian and ...dog walker 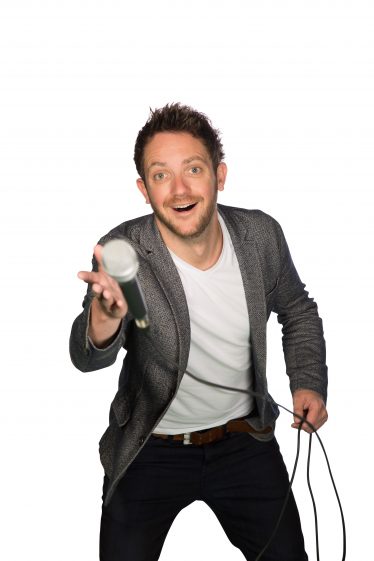 That is a headline I have wanted to write for a long time. And it’s not a lie. It’s just one of the things that we can do to save the world, or at least our community. Meet Danny O’Brien, Ireland’s, if not the world’s, hardest working comedian. In 2018 he did no less than 400 stage shows and also performed a number of times on television and radio. Given that we only have 365 days in a year that is some feat.

We talk on the newly launched Wicklow Good News podcast (details below) and Danny says the total number of shows was probably higher. Since 2018 his career has picked up a pace and now he finds himself continuously flying backwards and forwards to the UK to appear in shows, but he still considers Ireland his home and would not like to move abroad.

In fact, just before the COVID 19 virus became a thing he was busy appearing in theatres in the States with a follow-up five week tour planned for New Zealand. His whole life is traveling and being on the go.

“And then it just stopped, overnight. My career just stopped. Friends had been messaging me saying to come home and I realised this was serious, so I luckily got on one of the last flights out of America. In just 72 hours everything had changed.”

“It was really tough until I discovered my local gym was doing classes on Zoom and signed up.  I felt a bit of an idiot but so did everyone else. Then I went for a run (within 2kms of course) and I felt so much better.

“Structure and exercise, it is really good for the brain and your mental health.”

Another aspect of the life of a comedian is typically they aim their premier show to an event, such as Edinburgh Fringe Festival. Normally they would start with an outline, then refine it throughout the year aiming for the finished show. Now with everything cancelling, Danny was unsure how to motivate himself to write his new show.

“So I took the whiteboard that I use for writing – and cleaned it. I basically started my show. This is a big mental thing for me. It’s like looking at your house and saying I could really give the bathroom a deep clean.

“Nothing is ever finished,” he added.

For the first time in three years this is most amount of time Danny has been at home. He and some comedian friends locally have teamed up together to get around the challenge of aiming for the now cancelled Edinburgh Festival. They have opened a What’sApp group and are trying to bounce ideas off each other and stay motivated.

Ironically last year, Danny did a show called Lock-in which was based on Irish prisons. He reckons the same prisoners are probably laughing at him now.

While Danny’s career has skidded to a certain halt, he is also aware this predicament is universal to everyone in Ireland.

“There is no point in counting up all the loses because everyone has something. There is not one single person in Ireland who has not lost something: it might not be money or a job, it might be grandparents not being able to see their grandchildren, or visit them for their birthdays. We need to remember this and not compare ourselves with others. We’re all in this together and the question what can we do to make things better?”

That’s where Danny got to walk the dog, a Doberman called Pony. A friend contacted him to see if he could help as the owner has some serious immune issues. Turns out the dog owner was also a regular visitor to his comedy show which was a funny coincidence. Danny always wanted a dog, but his constant travelling meant it was not practical. Now he is really enjoying walking the dog and the dog owner is not feeling guilty. It is a win-win situation according to Danny.

“And I saw another beautiful of human kindness in my local village shop. A college student had posted a notice saying if anyone needed any help – to call her. Shortly aferwards I bumped into (at a safe distance) kids who had put their old books into a box down on the beach with a sign saying – If you are bored, please take one.”

Danny did his first virtual comedy show last weekend for the Irish Cancer society. He and number of other comedians wanted to raise money for the cancelled daffodil day fund raiser. They set a goal of €10,000 but were flummoxed to raise an impressive total of €42,000.

But it was a weird gig – playing to no audience. Danny has played to big crowds and small numbers but playing to a dog – well that was some experience.

“It’s amazing how much a comedian feeds off an audience’s reaction, even a very small audience.”

In between writing his new show, walking Pony the Doberman and doing online gigs, Danny has turned to cooking. His Instagram account is now home to tasty recipes from spoon cut slow roast lamb to cheeky cheese fajitas. He advocates for healthy eating from local produce.

“We are going to be in lockdown for a long time, we don’t want to come out waddling from our quarantines, do we?”

The best way to find Danny online for comedy or food is on Facebook where he is @DannyOBrienComedy or @DOBComedy on instragram. He has yet to succumb to Tic Toc.

Wickow Good News is a podcast available on https://wicklowgoodnews.buzzsprout.com/ and https://www.facebook.com/Wicklow-Good-News-108171104170251/ to tell the good news stories coming out of Wicklow as Irish people rise in solidarity with front line workers to help their neighbours. Wicklow Good News was set up by Jillian Godsil and Marlena Murphy. Over the coming weeks they hope to speak with the many heroes who shine despite the terrible times.