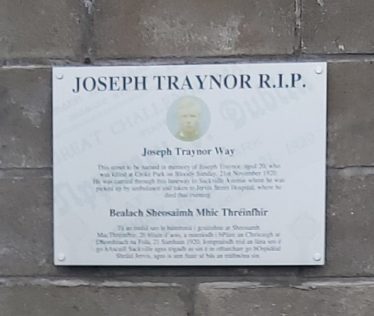 On the afternoon of 21st November 1920, my uncle  Joseph Traynor attended a football match in Croke Park, Dublin. He was to become one of the fourteen innocent people who lost their lives because of what happened on that day. Joseph known as Joe was 20 years old. He was son of Michael Traynor and Kate Langrell who were both natives of Aughrim, Co. Wicklow.

The five Ring brothers who were active Volunteers during the War of Independence were at home in Sackville Gardens adjacent to Croke Park on that afternoon. On hearing the shots they ran towards Croke Park to try and assist the injured and dying.  Christopher, Joseph and Patrick Ring helped the injured Joe Traynor over the wall. They carried him into their family home and placed him on the kitchen table where he lay bleeding to death. Unable to help stem the bleeding they called for an ambulance. They were fearful for their safety when security forces threw a cordon around the area of  Sackville Gardens.

Carrying Joe out through the back of their house, they took him to a laneway adjacent to Sackville Avenue. The lane was known as Love Lane. The unconscious Joe was picked up by ambulance driver Joseph Connolly and taken to Jervis Street Hospital where Joe died one hour after admittance.  For the Centenary Commemoration of Bloody Sunday 2020, the Ballybough North Strand History Group remembered the 14 victims with large posters depicting their images displayed in the area adjacent to Croke Park. Dublin.

100 years after Bloody Sunday 1920 on the 21st November 2020 Nial Ring, Dublin City Councilor and former Lord Mayor of Dublin, grandson of Joseph Ring who helped Joseph Traynor on that afternoon, unveiled a plaque renaming Love Lane to Joseph Traynor Way. The ceremony was to be public but due to Covid19 restrictions was attended by just three people. Myself, Nial Ring, and my cousin Michael Nelson. Nial lay a wreath on behalf of the Ring family. Myself and Michael on behalf of the Traynor family. At a later date, there will be a public event.

Read more about the Traynors in my articles The Patriotic Traynors and Who was Granny?