You are here: HomenextTopicsnextTOGETHER APARTnextGavin Clifford - from his dream job of making gin to making hand sanitizer 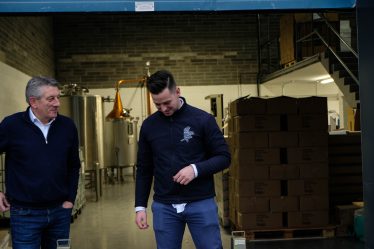 Gavin Clifford is the founder and inspiration behind the boutique Irish Bonac Gin. Named for the US harbour, originally it was called Bonac 24 to mark both his age and the number of attempts to get the flavours working. However, a branding conflict saw the gin renamed to Irish Bonac Gin earlier this year which might have been the big news for his artisan startup had not COVID 19 intervened. Now the alcohol has been switched to make a more pressing product – hand sanitizer – and Gavin has no idea how long this will last.

“I never saw myself switching to making hand sanitizer last year,” he says. “Heck I never imagined I’d be doing this two weeks ago.”

This is speed at which COVID19 can change a life.

Gavin got the idea for the gin distillery while working in the States in the hospitality sector. He was very impressed with the craft drinks industry and bowled over by the passion of travelling drinks founders and salesmen.

“These guys would come in with a box under their arm – it could be beer, vodka or a whiskey – and they would be passionate about their product.  Sometimes I’d be invited to see their brewery or distillery and I would discover this person was doing everything – distilling, packaging, sales and marketing. This really appealed to me.”

He used to joke that he had a keen interest in drinking himself but has changed that line since he went after his dream job. Now he says he has a keen interest in quality spirits. This interest in shared with his father and once the idea of creating a craft drink took hold, together they began visiting distilleries here and in the UK and Europe to understand the best practices.

So late 2016 they settled on the gin, the name, the process, the botanicals and started selling the distinctive Irish Bonac Gin. Fast forward to 2020 and just before COVID19 struck they were going to launch a gin school, inviting interested people to come to the distillery and have a tour. There was even a plan for the visitors to make their own gin.

Innovation is at the heart of the Bonac venture and currently, well prior to COVID19, Gavin had developed two flavours of his gin. Working closely with his father, Michael Clifford, he was on the front line for the gin production. During the day it was just Gavin producing and bottling his gins, truly calling them handcrafted. At night, when his father finished his day job, he would join Gavin and take care of the financial ends of things.

‘He has been amazing – after his own long day then he’d come and help me wherever it was needed.”

Christmas just gone had been very busy and during the quiet months of January and February Gavin was making plans to launch the gin school.

“We were literally one week away from launching it – we had our press release planned – and we were looking at St Patrick’s Day for our announcment.  Then it all kicked off and we were not sure what to do next.”

With his own sales on hold, Gavin twigged that they were sitting on raw materials for hand sanitizer.

“We wanted to help. We knew there was a global shortage, but we knew if we retooled our production line we could change it from gin to hand sanitizer.”

So he stuck a few notes up on Facebook and Instagram. And it just blew up from there. Gavin doesn’t know but somehow his mobile was out there too and he was getting bombarded with calls, messages and shout outs for sanitizer.

What really stuck him was everyone was trying to help in some way. “People are looking after their neighbours, looking after strangers – this goes way beyond looking after loved ones. We wanted to do our part too.”

The first batches of hand sanitizer were donated to the Red Cross and local hospitals. Quickly, the reserve stock of alcohol was used up and Gavin has turned his charitable move into a new business. He is buying in new raw materials and containers to hold the sanitizing liquid. In addition to the charities he has found corporate customers who are now purchasing his product. He is busier than ever and trying to support the local needs first.

His bottling line has changed from the distinctive Bonac gin to 500 mls of sanitizer which he hand bottles and fits the caps.

From making gin to making hand sanitizer is not something Gavin would ever have imagined before COVID19 and while he is desperate to get back to making gin, he is very happy to provide a product that is needed so badly. And he wonders if this sideline might be a permanent product even after the lockdown is eased.

Wicklow Good News was set up by Jillian Godsil and Marlena Murphy to celebrate the resilience and the enthusiam of Wicklow Citizens during the COVID19 pandemic https://wicklowgoodnews.buzzsprout.com/970561/3260458-wicklow-good-news-4-gavin-clifford-ceo-of-bonac-irish-gin