You are here: HomenextNew contributionsnextMince Pies, Tea and History at Wicklow Library with James Scannell Wednesday 15th December @ 11.30 am 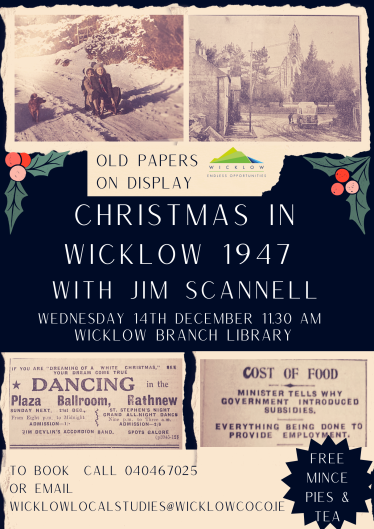 In 1947, most of Europe still lay in ruins. The unity between the wartime Allies had disintegrated, Communism dominated Eastern Europe, India gained its independence from Britain while, at the same time, Britain attempted  to stop mass Jewish emigration to Palestine, the later known State of Israel.

Within Ireland, rationing was still in operation for many goods and commodities, tuberculosis was rampant, and emigration to Britain was the only option for thousands of skilled and unskilled workers needed to rebuild Britain’s war ravaged cities and towns.  Locally  Christmas was ‘make or break’  for traders  who prided themselves  on the quality of their goods and services,  while for many families,  the arrival of funds from family members working in the United States of America  or Britain  decided the manner in which  they celebrated  the festive season.

In his talk ‘Christmas  in Wicklow 1947’, historian James Scannell will use historical  newspapers to explore how Christmas was celebrated only two years after the end of The Emergency.

Mince pies, tea and coffee will be served and a selection of historical newspapers will be on display.

To book your place contact Wicklow Library on 040467025 or email Wicklowlocalstudies@wicklowcoco.ie