You are here: HomenextNew contributionsnextPaul Jacob invents the 60 sec desk to help with home working 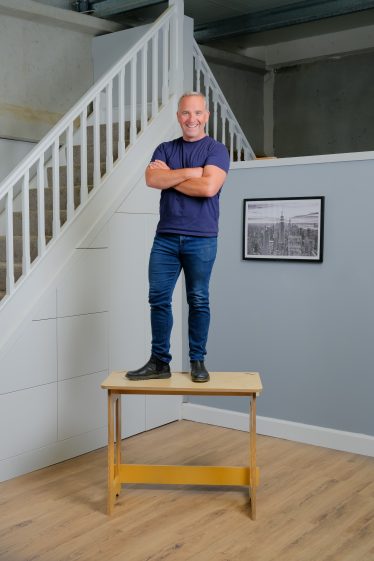 Paul Jacob founded Smart Storage ten years ago in response to his own family circumstances. Living in a semi-detached house with his growing family there was not just enough storage space and so he put on his design hat and came up with innovative and smart storage space to make use of the dead space under stairs. Fairly soon afterwards, he found himself on Dragons Den with investors fighting over who could invest in his company and over the past decade his company has won many awards from Hoozz and other prestigious platforms.

The reason for his appearing on Wicklow Good News is that the COVID restrictions again prompted Paul to rethink how furniture can be used to better effect – and he presents the 60Second Desk. Paul explains that while his business is based in County Wicklow, he employs 70 people across Ireland the UK with 25 of the staff based in the headquarters in Newtownmountkennedy.

People were struggling to work from the kitchen table

“Like every other business-owner we looked at what was happening around the world. By early March we began to deploy our staff at home but that threw up lots of problems in that we had to provide them with materials, computers, access etc. And then we saw that people were trying to work from their kitchen table as most people didn’t have dedicated office space at home.

“Very quickly we could see that people were struggling to work from the kitchen table. For example, one person in our office found themselves working from home but so too were her husband and son – in effect there were three companies all struggling to work form the same space. It was like a mini industrial space in her own kitchen and it wasn’t working very well. And that was before one even considered the kitchen table is also a place for food, meals and children to use for homework.”

Paul knew he had to come up with a solution to finding a physical desk for his employees but quickly realised a regular desk was not going to work.

“Can you imagine if I had presented my employees with office sized desks and telling them to leave them up in the kitchen for the next 12 months.”At this point Paul shakes his head and laughs. “And can you imagine if we had sent home flat pack desks – it’s nearly takes a masters degree in engineering to put those together.”

Paul’s response was to go back to the drawing board, literally. He sketched out a simple design of a desk that can be assembled merely by interlocking all the parts. He designed and produced it and gave it to his staff. The response was very positive and so he looked at it as another commercial product in his portfolio, rather in the same way the home storage had originally developed.

As the desk was developed, Paul also considered the fact that everyone is doing some sort of video call with their workplace. So he set about building in slots for the mobile phone or ipad so that people could easily set up video calls. A cable tray makes sure wires are kept tidy and the surface of the desk has a laminate to prevent hot coffee cups making unsightly marks.

One of the really cool aspects of the desk that while not ugly, in fact it is stylish and very contemporary, is that it can be dismantled very quickly and rolled under a bed or pushed behind a sofa, returning the room to its original living function.

The 60second desk is Irish made and sourced from Irish timber. Like the other products which ship across the world, even as far as the Faulklands, Paul is hopeful his desk will follow suit. In the past ten years more than 45,000 units have been shipped worldwide.

COVID19 has impacted other areas of his storage products too. With people using their homes as gyms or even cleaning more (allegedly) his carefully designed storage products makes it easier to tidy these products away.

As Paul looks at it – COVID19 is making us rethink how we have been working and some changes may be for the better.

“Since the start of the Industrial Revolution we’ve worked on the principle that people leave their homes and travel to work in an office or a factory. With the impact of the lockdown it has been proven people can work from home and we need greater flexibility. But, and this is a big but, if people are working from home or in apartments, especially shared apartments, they need the tools to do just that. The lockdown in that regard may have shifted the way we work by ten years or so.”

Another issue solved by the 60Second desk is COVID desk. “It’s a thing,” says Paul. Basically, the kitchen table is built for eating meals not using a computer or other devices and people often get back pain from the awkward angles forced upon them.

The desk costs €129 plus VAT and delivered anywhere in Ireland in a couple of days. There are only five parts which slot into each other. There are no screws or fixtures. In fact, Paul is hoping to run a competition to see if anyone can assemble the desk in less than 60Seconds.

Paul’s journey with the 60Second desk is a great example of how a small business owner not only looks after maintaining his staff during the crisis but also how he can benefit other people at the same time.

People wishing to look at his desks and other storage can go to the smart storage website https://smartstorage.ie/