The life story of Beatrice Woodhouse (born Dowse) as told in letters, from 1891, when Beatrice was sent back to Ireland from Canada, to her death in 1964 in Dublin. Compiled and edited by her grand-niece Alana Stephens and published on this website in a series of chapters.

CHAPTER FOUR:  An Old Friend Revisited and a Sad Loss

Beatrice’s childhood friend, Elma Kingsley, had married and was now Mrs. Penn, and lived in Cheam, Surrey, England with her husband. Elma often invited Aunt Maud, Beatrice or Aunt Violet come to stay with her for extended periods of time. In September of 1923 all three – Violet, Maud and Beatrice were visiting Elma, as the following letter of Maud’s explains.

We all, & the Penns spent a very nice day at the Aerodome[1] not far from this. We went out early & took lunch & tea. It was a glorious day, so hot. Bea sent cards from it to some of you. It was very interesting watching all the [illegible] starting to Cologne, Amsterdam, Berlin etc. as well as joy rides. They gave 10/ & 1 pound ones [rides]. Bea & I had the 10/- ones. It was most thrilling. I felt all of a flutter. We had to put on leather caps. There was a grand view below from the height. We were not very high, tho’ it was such a hot day there was a great gale blowing we could hardly lift our heads when facing wind  & we could not hear each other speak, tho’ we shouted at each other! It felt when turning, the [illegible] to come down as if we were falling! however we arrived on terra firma once more. Since then, in fact I think it was the next day, there was a great crash on the Manchester route & all were killed, 5 people together. It is a mystery as to what happened. 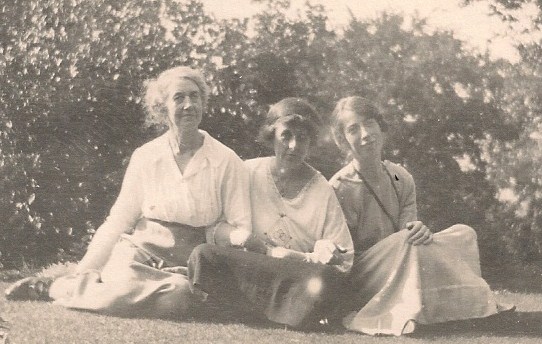 Maud, Elma and Beatrice in Surrey

Beatrice was still in England visiting with Elma Penn when she received the shocking news that her uncle Dick was seriously ill. By this time Edie and Dick Dowse had sold Umrigar House and had purchased Carnew Castle, Carnew, Co. Wicklow, where they were now living. Beatrice rushed home to Carnew to be at her Aunt Edie’s side. In a letter of Dec. 10, 1923 May Dowse relays the shocking news to her daughter, Kathleen.[2]

Aunt Maude told us Uncle Dickwas taken by motor ambulance to a nursing home in Dublin and brought back in motor hearse in three days! Beatrice was with them, as she left London (where she was staying with Elma Penn and Maude) the same night and was a great comfort to both (uncle and aunt) and is staying on there. She was kept busy with callers enquiring for Uncle Dick, and at his death all Carnew was closed up, and such a funeral! He was greatly beloved by all, and had hosts of friends. The castle is a desolate place truly. I wonder will Aunt Edie keep up such a place alone – 70 acres were attached, of first class land. They kept a gardener, as the garden was large and beautiful. Edie will be terribly desolate – herself and Beatrice. Likely they are both in Dublin shopping[3], or at least Beatrice will be, and likely would make her aunt go away for a change.

Beatrice had arrived just in time to see her uncle (Richard Morton Dowse) and to spend some precious time with him before he died.

[Referring to Aunt Edie, Beatrice writes] Poor little woman, she has had a terrible time, Uncle’s death was so sudden. Even though he had been ill we all hoped he would recover. He suffered greatly (the bad attacks came on in rapid succession) but when the specialist came he said there was no hope here but every chance if he could be moved to his Nursing Home, which was done by Ambulance of Ballsbridge. It was a long journey. Dr. King, his day nurse & Wentworth Taylor[4] (Ed Taylor’s eldest son just qualified) went with him, Aunt Edie, Hugh[5] & the 2nd orderly following in our car, & the other nurse, luggage etc. by mail train. He went off in good spirits, joking to the last, said goodbye, & I was also up the following Friday to spend the day with him. Aunt Edie stayed with the Taylors in Merrion Square. The next day I had several wires to say he was going on well, & on Thursday 2 letters & a wire by post saying Doctors greatly pleased & had a good night, then at 4 of bad news to prepare for worst – sudden change & to send the car up. So I made Mona[6] go with Hugh in case he might be wanted, as I was left in charge here & knew the house work, etc. better. Dr. King came in after they had gone & he almost convinced me that he would rally again. Then Mr. Lindsay came to sit up late with me knowing I was alone & Connie Godfrey[7] came in on her way home from the late train to say that all was over & Aunt Edie coming down. They all came about 1 of.

Poor desolate little woman. It was difficult because the news had all been so good, & then the sudden collapse. The poor heart could not stand the strain – the pulse increased from 72 to 144.  He came down on Friday by motor hearse, a very different return from what we had planned. The funeral was at 12 of the following Monday – it was a terrible time. Aunt Edie did not come down for days after. She saw the Wilson boys, who came down. Dick came from England to take part in the Service & of course Dick Manifold[8], & a lot of others.

It was a great relief to me when that day was over. Simply hundreds of people came to the funeral – he was such a popular man. The townspeople loved him, even the poorest wrote such nice letters. This is a very different place without him, he was such a big cheery straightforward man – always ready to advise. I am so glad I came at once & had even the few days with him. He talked a lot; his great disappointment was not being able to see Dad.[9] I said I was sure he was coming & he cheered up at once & was so excited & made me see that everything was ready, & I think each time the door opened he expected him.

Aunt Edie sends her love & hopes to write soon. She would not dream of asking Dad to come altho’ she had been longing for him, but of course she & I both know Ireland holds no interest for him now, & that Dick’s[10] serious illness makes it quite impossible for him to come.

I am so glad Maud is staying on with Elma – they are great friends & Maud is very happy indeed, & I hope to see her in the Summer. I have not been able to get up to see Violet yet – I can’t stay away a night, Aunt Edie would be in despair. She hates sleeping alone & feels nervous. She has not eaten anything worth speaking about for weeks & not been outside the door. She wants fresh air badly.

I must hurry for post – it leaves in half an hour. Very much love to each, 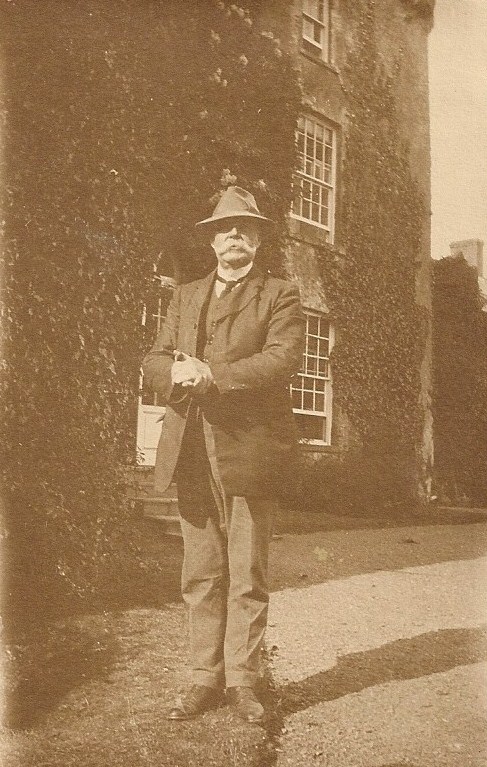 From the time of her uncle’s death Beatrice remained at the Castle with her aunt Edie and helped with the daily management of the Castle.

We have not heard from Beatrice yet. She and Aunt Edie were going up to Dublin for their mourning. Poor Aunt Edie is heartbroken, she was devoted to Uncle Dick. Of course Bea will live with her now, and Aunt Edie is very good to her (so Aunt Maude says, and that Bea will be the greatest consolation to her).

[1] Possibly at Brooklands, where an aerodrome existed in 1923

[2] May’s daughter Kathleen had married in Sept. 1922, and was living with her husband, George Binkley, in the city of Winnipeg.

[4] The Taylor family were cousins to the Dowses

[5] Hugh Woodhouse, owner of Carnew Motors and a frequent visitor to the Castle

[10] William Robert Dowse’s son (Beatrice’s brother) was also called Richard Dowse. He was seriously ill for many months in 1923 and had recurring bouts of  illness throughout his life