The life story of Beatrice Woodhouse (born Dowse) as told in letters, from 1891, when Beatrice was sent back to Ireland from Canada, to her death in 1964 in Dublin. Compiled and edited by her grand-niece Alana Stephens and published on this website in a series of chapters 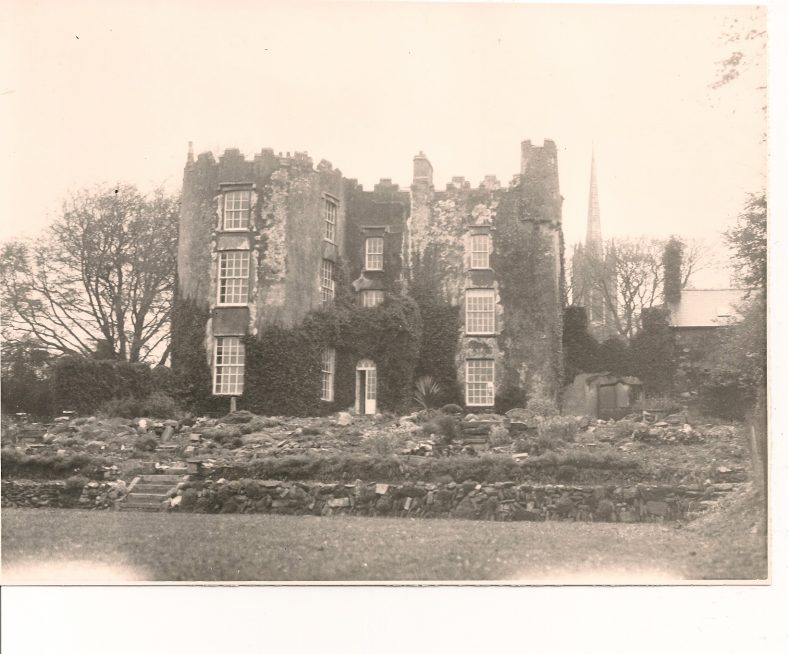 With the coming of war life at the Castle was changed forever. Hugh became a Transport Officer in the Irish Army and was rarely home. Due to petrol rationing the workshop closed and some of the staff joined the army. Beatrice struggled to keep things going but was overwhelmed with all the work that needed to be done, and with few people to assist her the Castle businesses (gardens, farms, stables, dairy) began to deteriorate.

A letter from Beatrice’s father, William Robert Dowse, dated October 1940 shows his concern for the state of the Castle, and of Beatrice herself.

What in the world is the matter with you? You never write, and I never hear a word. Are you still carrying on, or have you moved out? How is the war going as regards to Ireland? I think Canada is the best place – the Atlantic is pretty wide and wet.

Are you doing any farming now, or what do you do? Is the garage going strong?  Tell Jim I am working away the same as ever. I would like to drop in some day and give him a hand. How are my old friends? It is now just 4 years since I started for old Ireland, I wish I was doing the same thing now, but may sometime, one never knows what is ahead.

Will Hugh have to go to the front? We may meet some day, what a time. I have driven the car a lot this summer, and she goes tip-top. How are you on gas, plenty? Lots here, 25 cents a gal.  How are the horses now, as many as ever? and the dogs, did you sell the hounds. And I suppose the big dog is with you still, I forget her name now, she got fond of me.

How did the garden pan out? apples plenty – lots here, and cheap.

Time keeps going on pretty fast, and I am not far from the fourscore. I must conclude. Sit down some day and tell me what is going on and all the rest. Remember me to all my friends.

With love to both and waiting for a line sometime in the near future.

Remember me as your old Dad

May Dowse’s letter of January 11, 1942 to her daughter Kathleen Binkley describes Beatrice’s situation at the Castle with Hugh away much of the time.

I have not heard from Aunts Ethel or Maude yet, but I had a letter from Bea. Certainly commodities are climbing over there and the income not. Hugh gets home every weekend. As a Captain his pay is cut down to just enough to pay his Mess, and his taxes and something else takes most of it! very unjust I think.

And in March of that year,

I have just finished a long letter toBea. She is likely still alone as Hugh is still in the Army naturally, and would be for a long time I fancy.

In November of 1943 Hugh was away from home on the Anniversary of their wedding day, but sent Beatrice a note, expressing his feelings about their marriage.

You will, I hope, get this tomorrow Re: 16th Anniversary of our wedding. To me at any rate it has been the best period of my life & I look forward to a future just as satisfying & contented. We have had our bad times, probably more than good times, yet on the whole I think we can consider ourselves lucky. We have each other & if not too much of “This world’s Goods” we can live a happy & contented life.

I should like to be with you tomorrow. You will know I have you in my thoughts & that the day means just as much to me as it does to you.

The best wish I can send you is for a continuation of our lives together until old age eventually must have its way.

I am thinking of you and I Love You My Wife

Beatrice’s cousin, Morton Wilson, remarked years later that Beatrice had told him that she and Hugh had never had a cross word. This note would seem to support that assertion.

As the war progressed the situation at the Castle continued to deteriorate even further, but Beatrice carried on as best she could. Beatrice was at that time breeding greyhounds, in addition to her other enterprises, but suffered a setback when one of the dogs was killed in an accident. Beatrice’s Aunt Maud[1], who was living at the Castle at the time, relates the event to her sister May Dowse,

Did I tell you about the hounds Bea had sent to be trained at Sandymount’s. Through carelessness on the part of the staff the best one got out & was killed  (presumably by a lorry) & the man told lies & said it happened while they were exercising in a field. Hugh is applying for compensation (don’t suppose he will get it, no money comes this way).

As things unravelled, and without sufficient staff, Beatrice worked longer and longer hours, pushing herself to get the work done, as Maud relates in this letter.

The garden needs a gardener desperately, but can’t be afforded. She has been out till 11:30 trying to get her peas & beans into the ground. There will be a good crop of raspberries & logans but they are smothered in weeds. She had a man in for a week, but the weeds come up while you wait, so to speak. The bees are a job in themselves – she was expecting swarms, but so far has not got one. There was one which got away, & she heard of one in the church! and hoped it was hers – but found it was only a very small affair, probably from the bees who have settled in the Church Chimney somewhere & warmed. We had to have the Thursday Eve Service in the Schoolhouse last week on account of bees going about the Church.

Finally, in the fall of 1945 the decision was made to sell the Castle and move to Newbridge, Co. Kildare. In a partial letter of Maud Kilbride’s she explains some of the difficulties in making such a move.

This is a very bad locality for an Auction[2], no one round here will give anything for good furniture, so they have not yet decided to sell here or there. Transport is so expensive (a lorry costs 6 pounds to go there) the expenses will be enormous. After a wretched summer the autumn has been bad & we are promised a severe winter – so if we survive that it will be a wonder. There was no fruit generally – only raspberries here, & there was such a promise of apples. They are a great loss, especially financially.