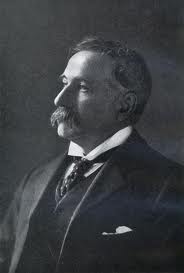 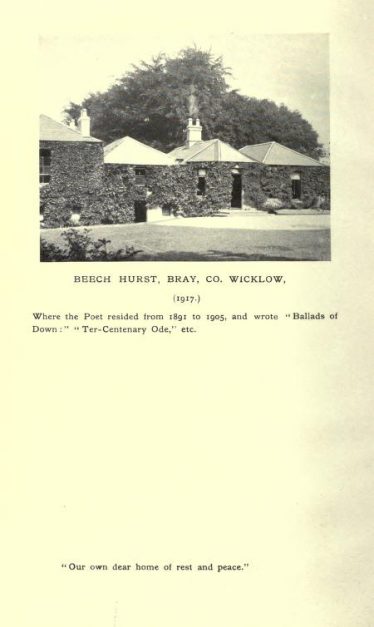 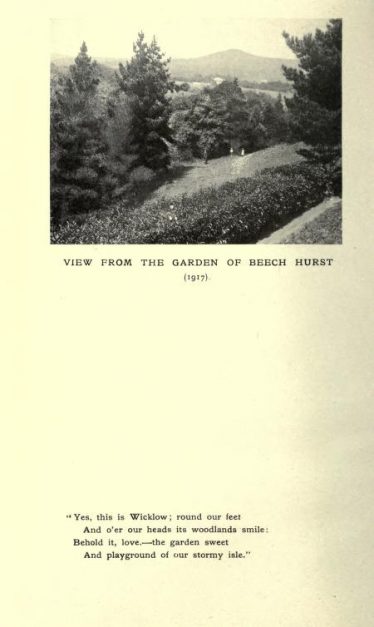 zoom
View from Beech Hurst
from Poems: national and international (1919)

George Savage-Armstrong was born in Dublin in 1845, but it was the neighbouring county of Wicklow, together with his mother’s native Down, which became the ‘twin spots on earth I hold most dear’, and inspired some of his most memorable work. From the family home in what were then the outer suburbs of Dublin, young George had a clear view of ‘that strange purple wall of hills stretching across the southern horizon, with the peak of the Great Sugar-Loaf lifted above their eastern slope (in colour and form     the most beautiful peak in all the island).’

Later, with his elder brother, Edmund, he tramped the Wicklow countryside, becoming familiar with its landscape, its people and its legends. Educated at TCD, Savage-Armstrong went on to become Professor of History and English Literature at Queen’s College, Cork, but his home for many years was at Beech Hurst in Bray, in easy sight and reach of the ‘purple peaks’ of his beloved Wicklow mountains. He retired from his academic post in 1905, and when he died in the following year at Strangford, Co Down was described in obituaries as ‘the poet of Wicklow.’

Savage Armstrong’s first collection of poetry was published in 1869, and he went on to produce several other volumes, including Stories of Wicklow (1886) and Ballads of Down (1901), as well as a satire, Mephistopheles in broadcloth (1888), and a selection of his verse was posthumously published as Poems: national and international (1919).Other works included a history of his mother’s family, the Savages of the Ards (1906), and a biography (1877) of his brother, whose promise as a poet was cut short by his early death. An ardent unionist, Savage-Armstrong expressed his loyalty to the crown in offerings such as Victoria, regina et imperatrix: a jubilee song from Ireland (1887). His work fell out of favour with the emergence of the ‘Celtic movement’ in literature, and he was attacked, ‘with a great deal of fierceness’ by Yeats, who alleged that he had ‘cut himself off from the life of the nation’ and ‘that his knowledge of Irish things was of the most obsolete kind.’

It is in his account of his own and his brother’s early life and in his Stories that Savage-Armstrong’s love of Wicklow is most vividly expressed.  He remembered walks together ‘to one of the most beautiful of the Wicklow gorges’, ‘long hours spent upon sweet-smelling heathery summits, gazing at the fleeting cloud-shadows in the valleys’, and reading Coleridge on ‘a huge mass of granite rock, fallen half-way down the mountain-side overhanging the wild valley of Glendhu.’ Writing many years later, he recalled the desolate beauty and sharp contrasts of the landscape in poems such as ‘To Luggala’

Mile after mile through moorlands bleak and nude,

Torn path and broken bridge; till wide and sweet

Beamed all at once the sun from mist and cloud,

And lo, in light and glory at our feet

Or this, a description of the views from the top of Wicklow’s highest point, ‘grand Lugnaquillia’, towards the Great Sugarloaf and the sea:

Slieve-Cullinn, dwindled to an arrowy point,

That in a cleft amid the summer woods

Showed, nestling, Luggala; and near us ran

The Avonbeg by Fananierin’s base

Away to mingle with bright Avonmore,

And low amid Ovoca’s wooded vale

We traced the wedded waters to the sea.

Savage-Armstrong’s narrative passages are less successful than the descriptive, but they do have the virtue, for those interested in folklore and local history, of recalling almost-forgotten associations. Several of the poems in Stories of Wicklow are based on fact: they include’ The fisherman’, described as ‘a true narrative taken from the lips of a Wicklow seafarer’, and ‘The bursting of Lough Nahanagan’, a tale of a flooded valley and a drowned love. ‘The wraith of De Riddlesford’s Castle’ is a saga of betrayal, murder and revenge, set against the background of the castle built by  Walter de Riddlesford at Bray in 1173, by Savage-Armstrong’s time no more than ‘a ruined tower’, while ‘The Glen of the Horse’ recalls a tragic episode during the rising of 1798, when ‘an outlaw, riding in terror from his pursuer, plunged headlong from the crags on the frantic horse, whose progress he could not stay.’ Elsewhere, he writes of the character of Wicklow people as, he says, he always found them:

A kindly folk in vale and moor,

In mood and manners, – rich with poor

While Savage-Armstrong’s use of dialect in his Ballads of Down has led to a recent revival of his reputation among scholars and enthusiasts of Ulster-Scots, his Wicklow poems are all but forgotten. Yet his descriptions of its wilder places still prompt a sense of recognition, and there can be few imaginative writers prior to Synge nearly two decades later who identified more closely with the region, or for whom the countryside, its people and its history offered more fruitful inspiration.

With Wicklow’s land of stream and hill

My childhood’s hopes and joys enwound me;

It woke the loves that mould me still;

With nets of gold its beauty bound me;

Where flashed its rills by rock and tree,

Where rolled its beaches’ ocean-thunder,

I bowed before the mystery

Of Nature’s life in awe and wonder.