You are here: HomenextPeoplenextHenry Grattan Podcast 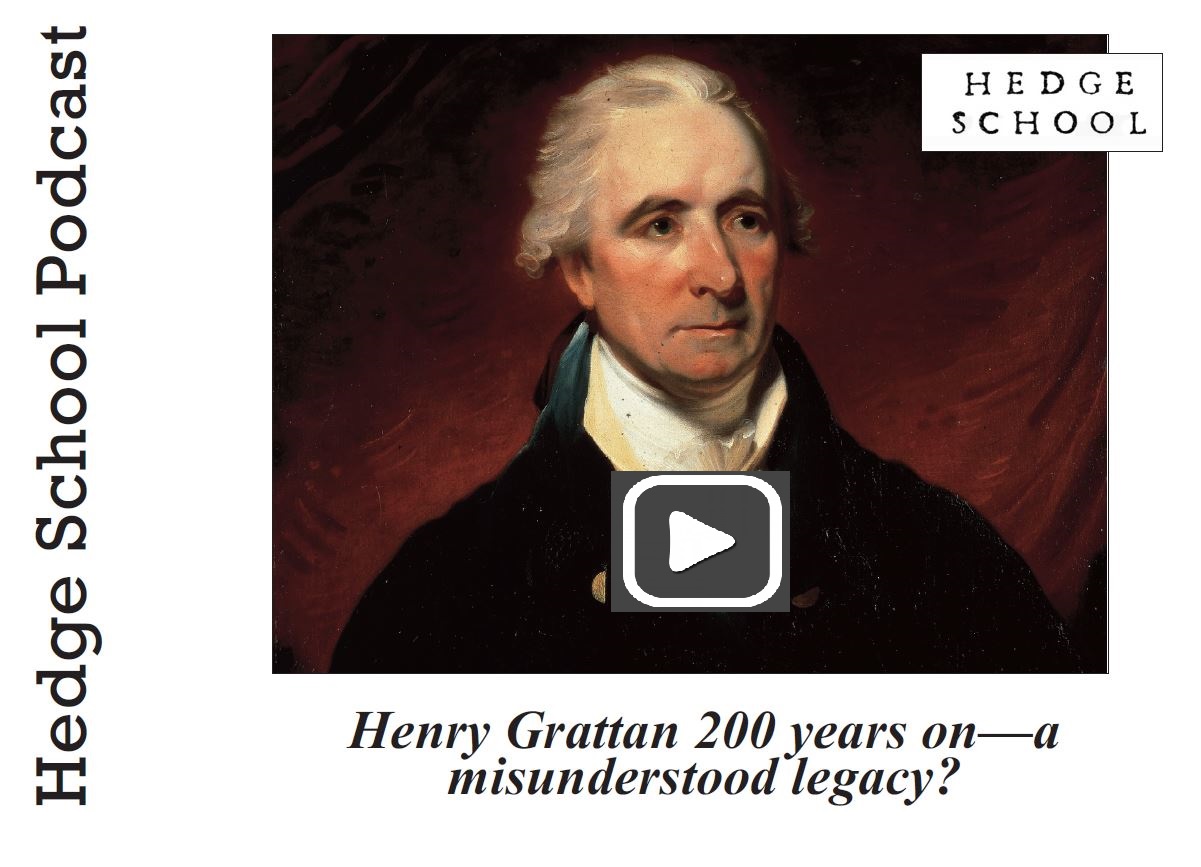 Supported by the Wicklow County Archives Service in association with the Bray Cualann Historical Society.

To mark the bicentenary of Grattan’s passing and to reassess his often misunderstood legacy, join History Ireland editor Tommy Graham for an online Hedge School, with David Dickson, Patrick Geoghegan, Sylvie Kleinman and Tim Murtagh. This podcast is now available on Spotify, Apple and History Ireland Hedgeschools or wherever you get your podcasts!

Born in Dublin’s Fishamble Street in 1746, but resident for most of his life in Tinnehinch, near Enniskerry, County Wicklow, Henry Grattan was the most noted, and certainly the most eloquent, of the eighteenth-century opposition ‘patriots’ in the Irish Parliament. He reached the height of his popularity with the concession of ‘legislative independence’ in 1782.

Nineteenth-century constitutional nationalists would later refer to this, until its dissolution by the Act of Union in 1800, as ‘Grattan’s Parliament’, despite his almost permanent position on its opposition benches. In truth its ‘independence’ was a sham, and its inability to reform itself or grant Catholic Emancipation led to the polarisation of the 1790s and the bloody rebellion of 1798. By now a marginal figure, he spoke eloquently, but in vain, against the subsequent Act of Union. Less well known is his return to Parliament, this time in Westminster, in 1805, where he served until his death on 4 June 1820.

David Dickson is Professor Emeritus of Modern History, Trinity College, Dublin; his most recent books are Dublin: the making of a capital city (2014) and The first Irish cities: an eighteenth-century transformation (forthcoming).

Patrick Geoghegan is Professor of Modern History, Trinity College, Dublin; his books include studies of the Irish Act of Union and Daniel O’Connell. He is the presenter of the award-winning ‘Talking History’ on Newstalk radio.

Dr Sylvie Kleinman is Visiting Research Fellow at Trinity College, Dublin, where she taught a course on ‘Ireland in the Age of O’Connell’, spanning Grattan’s life and legacy. She has worked for the Dictionary of Irish Biography and her research interests include 1798, visual history and symbolism in nationalist identities.

Dr Tim Murtagh specialises in the history of Irish radicalism in the eighteenth century. His first book, arising from his role as historical consultant for the Tenement Museum in 14 Henrietta Street, Spectral mansions: the making of a Dublin tenement, will be published later this year. He is currently Archival Research Fellow with the Beyond 2022 Project.