You are here: HomenextPeoplenextMichael Dwyer 1772 -1825 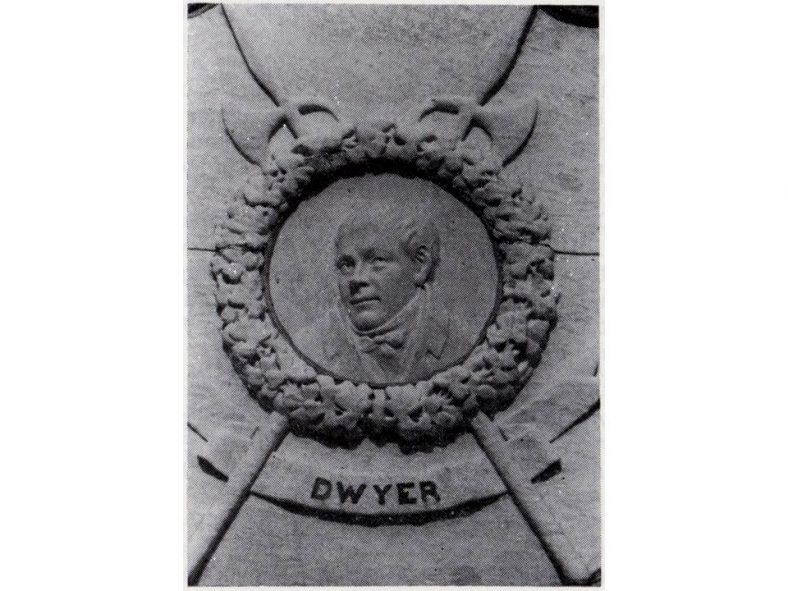 MICHAEL DWYER was born in the Townland of Camara, in the Glen of Imaal in 1772. Son of a small farmer, he was destined to become one of Wicklow’s most famous sons, and a living legend in his own time. Said to be influenced into republicanism by his schoolteacher, Peter Birr, he joined the United Irishmen in 1797, When the ’98 rising broke out, he travelled to Wexford as a Captain in the Ballymanus Corps, and with them took part in the battle of Vinegar Hill and other minor skirmishes.

After the reverses in Wexford, he retreated into the Wicklow Hills with General Byrne and almost immediately took part in the attack on Hacketstown under General Holt. This attack did not succeed, and shortly afterwards Holt decided to travel north to Meath with about 1,000 men to join the rebel forces there

It was at this point that Dwyer began to show his military capa­bilities. Unimpressed by the performance of the rebel army in action in Wexford and Arklow, he elected to remain behind with a group of men, and use the fastnesses of the Wicklow mountains to his own military advantage. It was as well that he did, as the rebel forces in Meath were soundly defeated in two major actions, which saw the remnants of the Wicklow/Wexford force retreating in disorder back to the Wicklow mountains. As a result of this defeat Holt surrendered and was transported to New South Wales.

Meanwhile Dwyer, with a small group of men began a guerilla campaign in the Wicklow mountains which was to last for the next five years, and would result in the expenditure of hundreds of thousands of pounds on the part of the Government, in a massive military campaign to catch him, which included the construction of the famous “Military Road” from Glencree to Imaal, along with five Military barracks to protect it. During this period Dwyer and his small band took part in an ongoing series of minor skirmishes with the military and local yeomanry, the most famous of which were the Battle of Keadeen Mountain in Nov. ’98, the ambush at Glenmalure in Oct. ’98, and the siege at Dairenamuck in Feb. ’99. As time went on Dwyer’s band gradually dwindled in number, but conversely his reputation increased by leaps and bounds, and by the time Emmet’s illfated rebellion took place in Dublin in 1803, Dwyer had become a legend. Regarded by the ordinary people of Ireland as a symbol of their continuing struggle for independence, to the Government and Loyalist establishment he was the arch­enemy, someone to be feared as a rallying point for resentment, and therefore someone to be crushed at the first opportunity. This ever present fear provoked constant comment in the newspapers of the Capital, and with hindsight it is obvious that the Government of the day thought that Dwyer commanded a much larger force than actually existed.

In any event, when Emmet’s rebellion foundered in 1803, it became obvious that all hope of French military intervention had ended, and these two factors combined to signal the end of the road for resistance in Wicklow. The finale came in the Autumn of 1803 when the Government launched their biggest military campaign yet under General Beresford, designed to crush Dwyer once and for all. It started with the arrest of members of Dwyer and Burke families, and was quickly followed up by the billeting of soldiers in every house in the mountains that Dwyer was thought to use, and the permanent blocking of all cross roads and entrances to the valleys by the military. Soldiers were already stationed in every town and village in the county. As a result of this pressure, Martin Burke was almost immediately captured by

the Monaghan Militia, so after some discussion with his remaining men, Dwyer surrendered to William Hume, Member of Parliament and Captain of Yeomanry, at Humewood Castle on 14th December, 1803. After hammering out favourable terms of surrender with Hume, he was taken to Kilmainham Jail on the 17th December, escorted by a party of Humewood Cavalry. The terms of surrender agreed with Hume included a promise of Hume’s help in seeking the release of their relatives from prison. Mary Dwyer and her children were to be allowed to accompany Dwyer to prison. They and their families were to be given free passage out of the kingdom as freemen and while kept in prison they were not to be ill-treated. These terms were to be made available to any of Dwyer’s men who also surrendered. As a result, soon afterwards Hugh Byrne surrendered to Hume and was sent under escort to Baltinglass Jail to join John Burke, and this was followed after Christmas by the surrender of Arthur Devlin to Hume and the capture of John Mernagh by the Newcastle Yeomanry while trying to reach Hume.

So ended the guerrilla campaign in the Wicklow Mountains, and the extraordinary terms agreed with Dwyer for the surrender, demonstrate most clearly just how glad the Government was to be rid of him.

Dwyer, Burke, Devlin, Mernagh and Hugh Byrne were impris­oned in Kilmainham Jail for the next 18 months while the Govern­ment questioned them and arranged for their passage out of the country. Their suffering was not over however, as during their enforced stay there, they were to fall foul of the infamous governor of the prison, Dr. Trevor, a man who constantly ill-treated them and frequently broke the terms of their surrender. He reserved the biggest breach of faith until last however, when in May 1805, he informed the prisoners that they were not to be sent to America as freemen as agreed, but were to be transported to Botany Bay as felons. The prisoners refused to go and were locked in irons as punishment. A letter from Dwyer to Hume broke the deadlock and a compromise solution saw the Wicklowmen deported to N.S.W. as freemen along with their families and with a large cash grant from the Government to help them start their new life.

Prior to leaving, Michael and Mary Dwyer were faced with the dreadful decision of leaving behind their four young children as they were unwilling to risk their lives on the long and dangerous journey to an unknown world. The children were taken in charge by Dwyer’s sister in the Liberties in Dublin, and Dr. Trevor under­took to send them on after Dwyer had settled in Australia, yet another promise that was destined to be broken.

On July 25th, 1805, Michael and Mary Dwyer, Hugh and Saragh Byrne and their two young children, Arthur Devlin, Martin Burke and John Mernagh left Kilmainham and were brought by carriage to the Port of Dublin where they boarded the revenue cutter “Camden”. They immediately set sail for Cork and on arrival, boarded the “Tellicherry”, a prison ship which was to take them to N.S.W. Crewed by 40 men under the command of Capt. Thomas Cussons, the ship was to carry 130 male and 36 female prisoners, including Dwyer’s party to Australia. They set sail from Cork on 31st August, 1805 and after a journey of 136 days arrived at Port Jackson in Sydney, N.S.W. on February 15th, 1806.

On arrival, Dwyer and the others were each given a farm of 100 acres, and they set about the backbreaking work of clearing the land. Things went well at first, but the arrival of a new Governor in July of that year changed everything. The new Governor, William Bligh, of “Mutiny on the Bounty” fame, disliked Irish prisoners in general, but seems to have taken an instant and per­sonal dislike to the Wicklowmen. In the Spring of 1807 Dwyer and the others were arrested on a charge of organising a revolt in the colony, along with Dwyer’s servant, Walter Clare, and two others. Following a lengthy and well documented trial, the Wicklowmen and Clare were found not guilty and released, while the two others, an Englishman named William Morris, and a Scotsman named Thomas McCann, were both found guilty and sentenced to the hor­rific punishment of 1,000 lashes.

The next day, Bligh took the extraordinary decision of over­throwing the ruling of the court, and finding them all guilty sentenced them to banishment in pairs to outlying settlements in the colony. Dwyer and Morris were sent to Norkfolk Island, where they spent the next six months before being transferred to Van Diemen’s Land when the Norfolk Island settlement was closed down.

Dwyer’s lot was soon to improve however, as in 1808, Bligh was deposed as Governor by the officers of the N.S.W. Corps in what has become known as the “Rum Rebellion”. During the court of inquiry which was held in London later to investigate the matter, the Officers justified their actions by citing Bligh’s erratic and tyrannic behaviour, and used Dwyer’s trial and later imprisonment as an example of this behaviour.

In any event, a new Governor was appointed, and one of his first acts was to order the release of Dwyer and the others They were given full pardons, and their land grants were restored to them. Later that year Dwyer, who lived at Cabramatta outside the new town of Liverpool, was made a Constable of that town, and was also given the title of Pound Keeper. Things continued to improve, and by 1814 Dwyer had increased the size of his farm to 400 acres and also owned some property in Liverpool itself. In 1820 Dwyer reached the pinnacle of his success in Australia, when he was made the Chief Constable of the Town of Liverpool.

From this point on Dwyer’s life took a sudden turn for the worse, as later the same year he was dismissed from his job for drunkeness. He had apparently acquired the habit during the terrible winters in hiding in the mountains of his native Wicklow. Dwyer now became a publican, opening an hotel called the “Harrow Inn” at his farm outside Liverpool. He borrowed heavily to do this, and it was this factor that was to bring about his eventual downfall. By the end of 1823, with his creditors pressing from all sides, Dwyer effectively became a Bankrupt, and after his farm and all his other property had been sold to pay his debts, he had nothing left. Committed to a debtor’s prison for some time in 1825 for the non payment of a £100 debt, he was released on May 24th, 1825. Just three months later he died on the 23rd August, 1825 at the age of 53, never having seen his four youngest children since leaving them in Ireland. They arrived in New South Wales three years after his death, to join their mother, brother James and sisters Bridget and Eliza.

So ended the life of Michael Dwyer, undoubtedly the most suc­cessful leader of the ’98 period, a man who had held the might of the greatest army in the world at bay for five years. He was buried in Redfern Cemetery, and when this was closed to make room for the new Sydney Central Railway Station, his body was removed to Waverly Cemetery.

As we approach the bicentenary of the rising, I think it would be an appropriate gesture to his memory, if we were to preserve from destruction the remaining architectural reminders of the day. The Military Road, Glencree, Laragh, Drumgoff and Aughavanagh Barracks and Humewood Castle all still exist in some form today. These could be used as the basis of a successful tourist industry, and at the same time could serve to remind modern Wicklowmen of the great deeds performed by our forefathers during this turbu­lent period of Irish history. 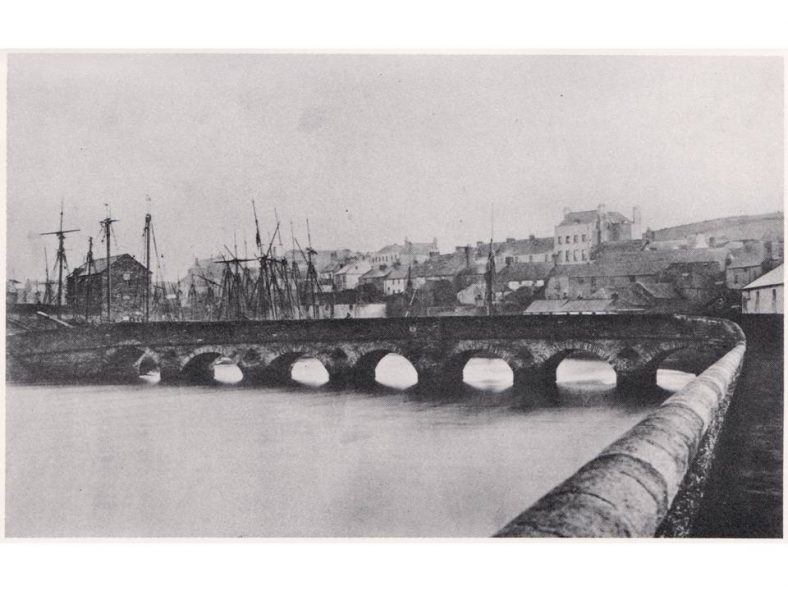