You are here: HomenextPeoplenextOur Wicklow Women ProjectnextLizzie Le Blond And The Establishment Of The Ladies Alpine Club

Lizzie Le Blond And The Establishment Of The Ladies Alpine Club 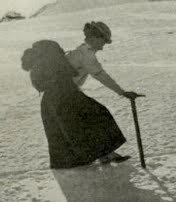 The establishment of the Ladies’ Alpine Club in London in December 1907 created a meeting place and support for a growing body of female climbers, whose achievements were already beginning to rival those of their male counterparts but who continued to encounter prejudice and exclusion on account of their sex. One of the guiding spirits of the Club in its early years was Wicklow woman Elizabeth Le Blond, herself a noted alpinist (see the article ‘Elizabeth Hawkins-Whitshed of Killincarrick: a Victorian lady in the High Alps’ )

As the LAC’s first president, Le Blond oversaw its move to permanent premises in Marylebone, saw membership rise to about one hundred by 1910, and helped to establish harmonious relations with the all-male Alpine Club. She would maintain contact with the Club through the difficult war years and in 1932 was unanimously elected to a third term as president, and when she died in office two years later was remembered both for her effective leadership and for her ‘kindness, sympathy and ready wit, no less than her energy and enthusiasm, [which] endeared her to all with whom she came in contact.’

An account of Le Blond’s involvement with the LAC is provided in Rosemary Raughter, ‘Mountaineering from a woman’s point of view: Lizzie Le Blond and the early days of the Ladies’ Alpine Club’ in Journal of the Irish Mountaineering and Exploration Historical Society, vol 4, 2015, pp 7-16. Copies of the journal (price 10 euro) may be purchased from Mountaineering Ireland, Irish Sport HQ, National Sports Campus, Blanchardstown, Dublin 15, www.mountaineering.ie