You are here: HomenextPeoplenextThe Stephens Family: A Story of Family Reunion during the Famine

The Stephens Family: A Story of Family Reunion during the Famine 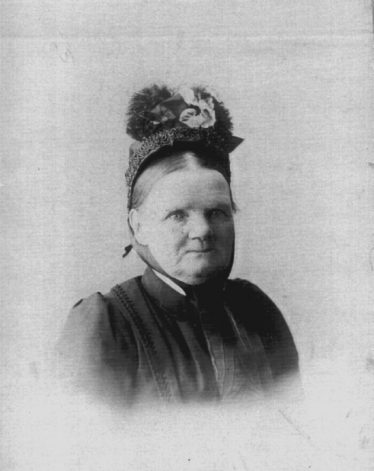 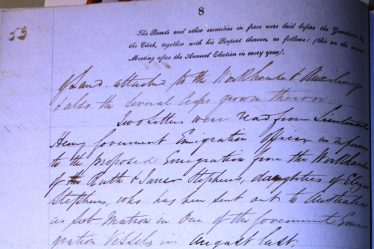 Ruth and Jane Stephens per Thomas Arbuthnot and their mother, Eliza Stephens, per Lismoyne: a story of family reunion during the Famine

Ruth [pictured, with thanks to descendant, Peter Eley] and Jane Stephens arrived in Sydney on the Thomas Arbuthnot on 3 February 1850, shown on the shipping list as simply from Wicklow with no further indication of native place. Ruth was aged 15 and Jane was 14; both were house servants and members of the Church of England who could read and write. The shipping list [see below] noted their parents as John and Eliza, ‘parents living in Sydney’ [Ref: SRNSW 4/4919 and SRNSW 4/4786 – is also scanned on Ancestry].

The disposal list for the Thomas Arbuthnot [Ref: Governor FitzRoy’s Despatch No. 127 of 1850, Mitchell Library, Sydney A1256 CY2056] shows that after five days on the ship, the sisters were placed in the Immigration Depot at Hyde Park Barracks in Macquarie Street, Sydney, the current site of Australia’s National Famine Memorial. Both were hired after 21 days in the barracks by Mr/Mrs M. Bowerman of Macquarie Street, Sydney. Ruth was indentured for 3 years at a wage of £6 a year; Jane, being younger, was indentured for 4 years at the same rate and both received full board and lodgings as part of their employment arrangement.

Ruth and Jane were in the Rathdrum Workhouse in County Wicklow and the Poor Law Minute book of Rathdrum, 13 October 1849, p.53, unusually, shows their names when recording incoming correspondence: ‘Two letters were read from Lieutenant Henry Government Emigration Officer in reference to the proposed Emigration from the Workhouse of Ruth & Jane Stephens, daughters of Eliza Stephens, who has been sent out to Australia as Sub-Matron on one of the Government Emigration Vessels in August last’. [see image of Rathdrum Minute book, provided with thanks to the Wicklow County Archivist, Catherine Wright]

As this document indicates, Ruth and Jane’s mother, Eliza, received a passage as a sub-matron on a previous vessel which was also an orphan ship – the Lismoyne which arrived in Sydney late 1849. Also note on the list of the Lismoyne that although it arrived into Sydney on 29 November, the girls were not inspected by the Immigration Board until 3 December, the date on the top of the document. This also accounts for the five days which the all the girls spend on the ship before going to the Barracks, which was noted on the disposal list.

Eliza Stephens and her daughters had all been in the Rathdrum Workhouse. Eliza was 37 and the shipping shows she was the daughter of Isaac & James Markes/Marks (both dead). The Lismoyne immigrant list proves the additional information that her husband, John Stephens, was living in Van Diemen’s Land [Ref: SRNSW 4/4911 and SRNSW 4/4786].

The story emerges that the husband and father, John Stephens, had been transported as a convict and was later followed to Van Diemen’s Land (Tasmania) by his wife, Eliza and his daughters. John Stephens arrived at Hobart on 18 March 1847 per Tory with a ten year sentence and was ‘hired by W Archer, Longford’ [Ref: HO 10/40].

His full convict record in Tasmania shows that he was tried in Wicklow on 7 July 1846; embarked on 31 October 1846 with a 10 year sentence and arrived in Van Diemen’s Land on 18 March 1847. He was Protestant and could read and write. He was transported for stealing John Pearce’s cows. John Stephens was a blacksmith, 5’9”, aged 34, fresh complexion, large head, brown hair, no whiskers, oval visage, high forehead, brown eyebrows, grey eyes, large nose, large wide mouth and medium chin. He had no distinguishing marks. This description is remarkably like the surviving photo of his daughter, Ruth, shown here. Once in Van Diemen’s Land he spent two years and six months in a probation gang

MORE TO THIS STORY SOON!!