You are here: HomenextPeoplenextTom Keogh of Knockananna: His role in Bloody Sunday 1920

Tom Keogh of Knockananna: His role in Bloody Sunday 1920 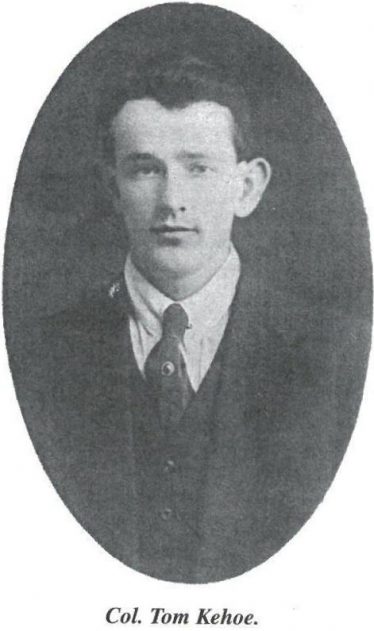 Born in 1899 at Rathduffmore, near Knockananna, Co. Wicklow, Tom Kehoe was the eldest son of Simon Keogh and Julia McDonnell, nee O’Toole, widow of the late Michael McDonnell. Until 1914, Tom attended Rathmeigue National School where he showed exceptional ability. Aged 14 years he left home to work in Dublin on the Great Northern Railway where he appears to have been employed as an apprentice fitter. In Dublin he lived with his half brother Mick McDonnell, under whose influence, he was to join the 2nd Battalion, Dublin Brigade Irish Volunteers in 1915, and during the Easter Rising Tom served alongside Mick McDonnell with garrison at Jacob’s Factory. Following the surrender, he was held at Richmond Barracks, where in the gymnasium, men were picked out for the British execution squads by detectives from “G” Division of the Dublin Metropolitan Police. Those not selected for execution were either sentenced or interned. On Wednesday 26th May 1916, the British Military announced that after fully investigating their cases, a list of 206 prisoners were to be released, among this group was Tom Keogh. Of this list, other names stand out, such as Sean Lemass, who would progress to be an Irish Taoiseach, also Vinny Byrne and Jimmy Conroy both to later serve alongside Tom Keogh in The Squad.

Early in 1917, Tom set up an ordnance factory under the cover of a bicycle shop in Aungier Street. There with a lathe and mandrel he manufactured weapons and hand-grenades. Later on he was involved in setting up a similar operation in Parnell Street, this time adding a small foundry where grenades were cast, including the famous “Number 9” and the “GHQ” Grenade”. With Matt Furlong from Wexford, he established a workshop in Luke Street, where they developed mortars. In 1919 Michael Collins took over an intelligence structure already operating under Eamonn Duggan. He soon put it on a new and different footing. The Main members of Collins’ intelligence staff were, Liam Tobin, Tom Cullen, Frank Thornton, and his right-hand man, Joe O’Reilly. On May Day 1919, Mick McDonnell, Dick McKee, Sean Russell and Collins selected a group of volunteers, for the purpose of establishing a Special Services Unit for the sole purpose of executing police touts, spies and British agents.

Operating directly under the direction of the Intelligence Department, this unit was known initially as The Squad and later “The Twelve Apostles”. Among the first selected for membership of The Squad was Tom Kehoe, who during the War of Independence would be directly involved in carrying out most of the executions carried out by that unit.

The Squads first execution was that of Detective Sergeant Patrick “The Dog” Smith of G Division, shot down close to his home in Drumcondra, on 30th July 1919; other executions of key members of G Division such as that of Detective Dan Hoey on 12th September 1919 and Commissioner William Forbes Redmond, on 21st January 1920, swiftly followed. From then on they carried out a series of ruthless killings striking terror into the heart of the British establishment. On 19th December 1919, they upped the ante when under the command of Mick McDonnell. Squad members including Tom Kehoe, supported by senior members of the 3rd Tipperary Brigade, were involved in the unsuccessful ambush at Ashtown on the Viceroy, Lord French. The British authorities appointed the Resident Magistrate, Alan Bell to investigate this attack. By March 1920 Alan Bell held a senior position with the Secret Service at Dublin Castle, where he sat on a sub-rosa committee co-ordinating intelligence. Along with this he also held public inquiries into the origins and locations of the funds collected in the Dail Loan. One of the principle people involved in tracing Alan Bell, was Tom Kehoe. On his bicycle, he traced him from his home in Monkstown on the morning of his execution. Cycling behind the tram car that carried Ball into Dublin, Kehoe overtook the tram at Ailsbury Road and waved a handkerchief to the waiting Squad to signal his presence on the tram. Disabled, the tram halted beside the RDS, where Bell was dragged to the side walk, and executed by Mick McDonnell and other members of the Squad. 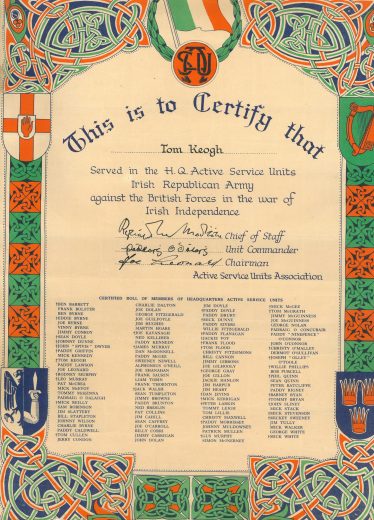 On the morning of Bloody Sunday 21 November 1920, the Dublin Brigade IRA carried out one of the most successful operations of the War of Independence. The British Secret Service operation in Ireland was decimated when 13 senior intelligence officers were executed and the remainder fled to Dublin Castle.

To combat the intelligence department under the Director of Intelligence, Michael Collins, the British were forced to draft in agents and assassins from England, the Middle East and Russia. The Cairo Gang, so-called because of their history of intelligence work in the Middle East, the fact that they were initially assembled for briefing in Cairo before being sent to Ireland and the fact that they tended to congregate at the fashionable Café Cairo on Dublin’s Grafton Street. The brainchild of Sir Henry Wilson, Chief of the Imperial General Staff, the Cairo Gang was established so that Dail Eireann, the IRA and its Intelligence Department could be eliminated. Once established the best British Secret Agents began preparing a hit-list of known republicans for assassination. The Assistant Director of IRA Intelligence, Frank Thornton soon obtained the names and addresses of all the senior British Secret Service men sent to Dublin and a list of agents were selected for execution on a particular date. The date picked for the executions was Sunday 21st November 1920, the day of a big G.A.A. charity challenge match between the Leinster champions, Dublin and the Munster champions, Tipperary, to be held in Croke Park. At 9 am of that morning, an IRA Unit led by Tom Keogh entered 22 Lower Mount Street. Their two targets were a Lieutenant Henry James Angliss and an Irishman, “Colonel Peel”. Angliss was executed while Peel managed to survive by blocking his bedroom door by pulling a wardrobe across it, although more than a dozen shots were fired through his door. The Squad’s raiding party of 11 managed to escape with only 1 minor injury despite the arrival of 2 lorry loads of Auxiliaries. After the operation Kehoe reported for de-briefing to Sean Russell at 7 North Richmond Street, and later that afternoon he attended the football match at Croke Park, where he had a lucky escape from death when the spectators were machine gunned by Auxiliaries, Black and Tans and British Forces.

Tom Keogh, along with Ben Byrne were also responsible for the shooting of British Army soldier James “Shankers” Ryan, believed to be instrumental in the capture of O/C Dublin Brigade, Dick McKee and his Deputy, Peadar Clancy. This execution occurred in Hynes Pub in Gloucester Place on Saturday 5th February 1921.

A colourful figure during the Tan War in Dublin, Tom Kehoe, was known as “Long Tom” on account of his height and lankiness. He used his knowledge and ability with livestock to pass himself off as a well-healed cattle dealer, frequenting the pubs at the North Wall, and in the Stoneybatter and the Aughrim Street area around the Cattle Market. He was an accomplished pianist and used his musical skill to get up close and personal with the enemy, entertaining them with his playing in the lounge of the Liverpool Hotel on the North Quays. His long delicate fingers are outlined in the alabaster figure on the Knockanna monument. Throughout the Tan War the Squad appear to have used Knockananna as a place for rest and recreation after and between jobs. On a reconnaissance mission to Coolatin in order to shoot Frank Brooke, Privy Councillor to Lord French, and Director of the Dublin and South Eastern Railway, they stayed so long at Knockananna that a telegram arrived from Mick McDonnell saying: “If you fail to return immediately you will all be sacked”.

Throughout the Tan War the Squad appear to have used Knockananna as a place for rest and recreation after and between jobs.

Once when staying with the Kehoe family home, members of the squad were surprised when a raid by Auxiliaries was led by Major J.L. Hardy from Dublin Castle. The gun battle raged across the fields about Rathnagrew but the IRA could not be outflanked and Hardy and his Auxies withdrew, leaving the field to the men from The Squad. With Mick McDonnell in poor health, before his departure to California, Tom Kehoe took over as Commanding Officer of the Squad, a position he held until his arrest and internment in Kilmainham Jail following the burning of the Custom House on 25th May 1921.

Tom Kehoe survived an explosion but his injuries were horrific, and in spite of being broken and battered, he fought hard to live having been removed to hospital in Cork City, but later died aged just 23. Tom’s remains were brought to Portobello Barracks and drawn through Dublin to the city limits on a gun carriage before being transferred to a motor hearse for the long journey home to South Wicklow where he was buried by his comrades from The Squad. In 1924, a highly ornate and decorated Celtic High Cross was erected in Knockananna in memory of Tom Kehoe. Three thousand gathered in the graveyard at Knockananna on 6th November 1924 to witness its unveiling by Major General Liam Tobin and hear the oration by General Piaras Béaslaí.

“The Kehoe Boys” was a name given by locals of Knockananna to the former members of The Squad and the Dublin Brigade Active Service Unit, who came annually to Knockananna to commemorate Tom Kehoe. 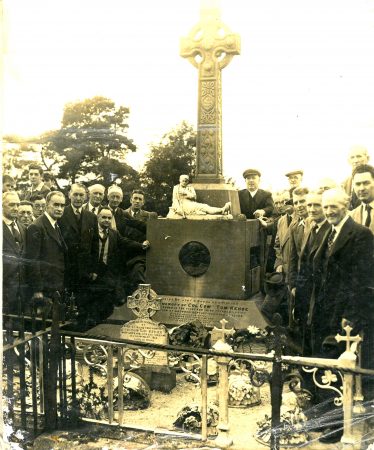 See document below for more information on Bloody Sunday: