You are here: HomenextPlacesnextANCIENT WICKLOWnextThe Beginnings of Farming - The Neolithic

The Beginnings of Farming - The Neolithic

Today it is easy for us to think that farming has always been in Ireland.  In fact, farming first arrived in Ireland nearly 6000 years ago.  Also, the domesticated animals and crops that we associate with farming in Ireland, such as cattle, sheep and cereals, were brought into Ireland at this time.  This also meant that the farmers needed to clear trees from the landscape in order to create the fields needed for farming animals and crops.  Of course, these early farmers did not clear all the forests at this time, and much of the landscape would have remained largely wooded.  Within these woodlands lurked many dangers such as bears, wolves and wild pigs. New technology was developed in order to facilitate this new economy and way of life, including stone axes to remove the trees, and pottery to store food.  Querns were used to grind cereals for food, such as flour to make bread. 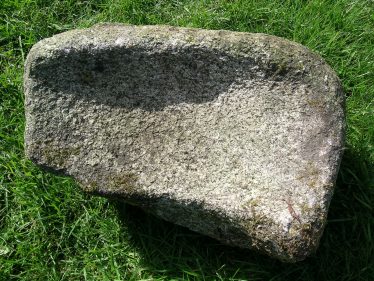 These early farmers also built large stone tombs, known as megalithic tombs, as places to bury their dead.  It is likely that these monuments were also used for other religious ceremonies at different times of the year.  These tombs come in different forms, and those most commonly found in Wicklow are known as passage tombs.  The name comes from the fact that these tombs were entered through a passage that led to a burial chamber near the centre of a large cairn or pile of stones.  These are most commonly found on the summits of the western peaks of the Wicklow Mountains, for example on the top of Seefin near Manor Kilbride.  Any farmer working their lands in this area 5000 years ago would have been familiar with this tomb, which appears as a small lump on the head of Seefin mountain.  They might have been able to tell us the names of the people buried there and may even have visited the site to pay their respects.  Obviously it would have taken a lot of people a lot of time to build such a tomb.  However, it seems unlikely that the people who actually built them would ever have been allowed to bury their dead in these tombs, and this privilege may have been reserved for the leaders of the community. Other archaeological evidence from this period comes from decorated stones known as rock art.  Most often these consist of a large boulder decorated with small hollows known as cup marks.  Sometimes these stones also feature a number of circles.  The purpose of these stones is very much a mystery to archaeologists today. 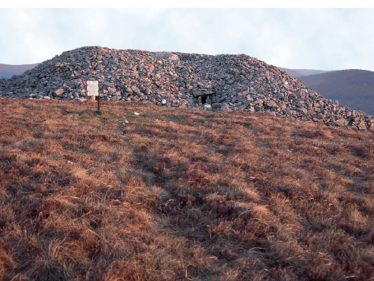 A passage tomb on the summit of Seefin