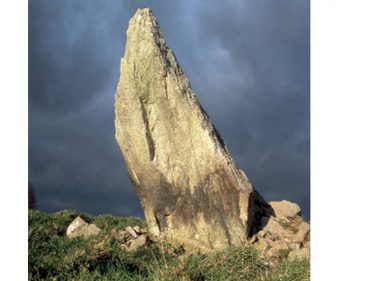 During the Bronze Age our ancestors sometimes placed standing stones in the landscape.  These are found throughout Wicklow, and consist of an upright stone.  The purpose of these stones remains a mystery.  Perhaps they were intended to mark route ways through the landscape, or perhaps they marked the boundary of lands owned by a tribe, or maybe they marked the place where a warrior fell in battle.

Other mysterious monuments from the Bronze Age are stone circles, which can be found in several places in west Wicklow.  A fine example of a stone circle can be found at Athgreany near Hollywood.  This stone circle is known locally as the Piper’s Stones.  According to local folklore the story is told that the stones forming the circle are dancers who were turned into stone for dancing to the music of a piper.  This of course is not true, but there may be some truth behind the folklore that dancing was one of the ceremonies carried-out at these circles.

The stone circle at Castleruddery near Donard is unusual in that it is surrounded by a massive earthen bank.  The entrance of this circle is formed by two massive quartz boulders.

From this stone circle can be seen the Brussellstown Ring, which is a large hillfort, probably built about 1000 years before the Birth of Christ.  This is one of a number of very large fortifications enclosing the tops of mountains in this part of Wicklow.  Two other fine examples can be found at Rathcoran above Baltinglass and at Rathgall near Shillelagh.