You are here: HomenextPlacesnextANNAMOEnextThe Village of Annamoe

The Village of Annamoe

What is “Annamoe?” Why is the name “Annamoe Mansions” cast in concrete on the front of an apartment building built in Edmonton, Alberta, Canada in 1914?  The answer is found in the tortured Ireland-England history of the past 700 years.  It is found in the Hudson’s Bay Company occupation of Canada from 1670 to 1866.  It is found in the remarkable 1910 land boom in Edmonton and a prominent Irish family possibly anticipating recrimination for supporting Irish independence. 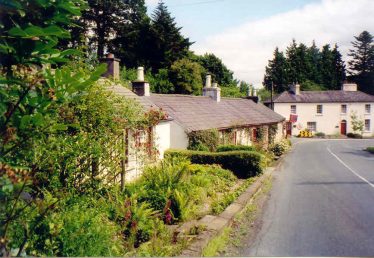 31 year old David Lubbock Robinson made a down payment of $2,500 on the $10,000 price for the Annamoe Masnsions lot (3). Sixteen months later In July 1914 World War 1 started and 3 months after the outbreak of the war, on Oct. 28, 1914, while in West Down South, England, David Lubbock Robinson joined the Overseas Expeditionary Force of the Canadian Army (15). While overseas he met his cousin Robert Childers Barton of Glendalough House, Annamoe, Ireland.  Robert Childers Baron was also in the British army (18).  This meeting resulted in Robert Childers Barton buying, sight unseen, the lot on which Annamoe Mansions would be built (5). 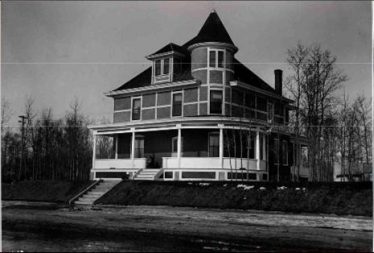 Annamoe Mansions were designed by “Architectural Designer”  Arthur W. Cowley,  of the Agency Building, Edmonton.  The original blue prints, dated Dec 1913, said “APARTMENT. BUILDING TO BE ERECTED ON. LOT 8. BLOCK 19. H.B.R. EDMONTON ALTA. FOR MESSRS. TAYLOR. WHITCROFT. AND ROBINSON”(16).  It was built in 1914 by the Zenith Contracting Co (4).  The building was a three story, 25 unit walk-up apartment, complete with a freight elevator powered by hand-pulled rope; electric door bells in the hallway outside of each unit; and dumb waiters in each unit, powered by hand-pulled ropes.  The dumb waiters were used to send trash to the basement (after signaling the janitor with an push-button bell) to be burned in an incinerator. 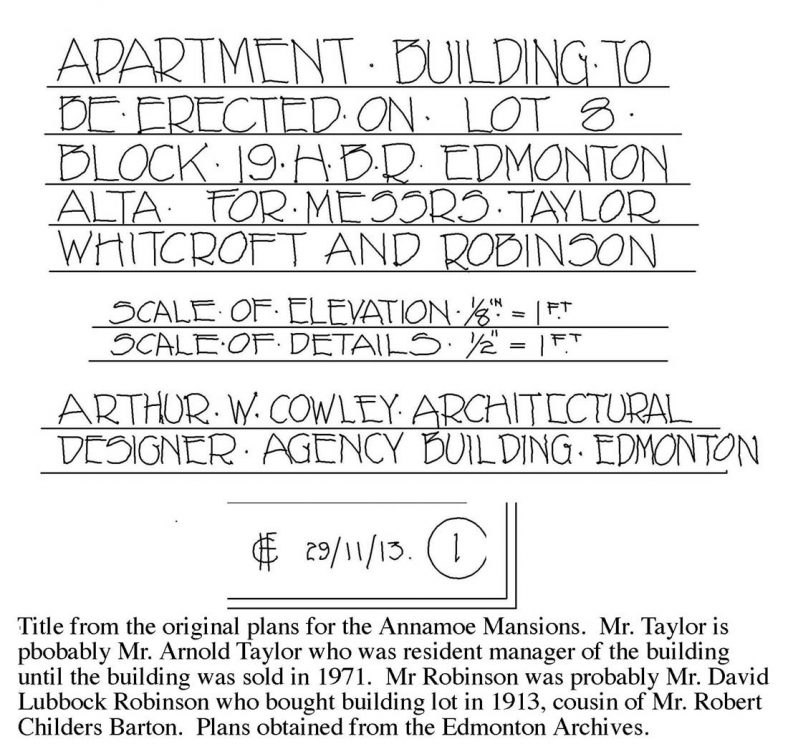 Beginning construction of the Annamoe, 1914

To date, the person who supplied the money to construct the Annamoe Mansions is unknown. However, the name name “Annamoe Mansions” is cast in concrete on the front of the building, suggesting Robert Childers Barton, who lived in Glendalough House near  Annamoe, Ireland, was the financier. 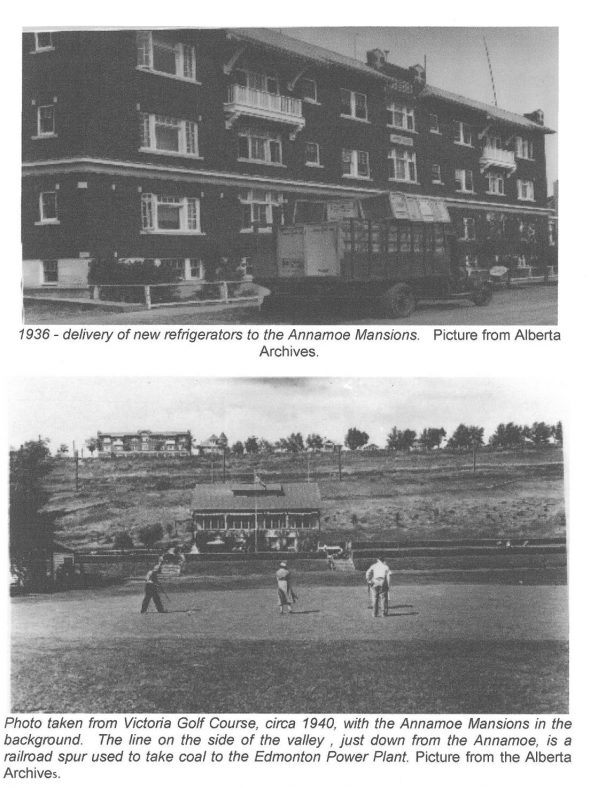 The Annamoe Mansions in Canada have an interesting place in the troubled history between Ireland and England. The names “Barton” and “Childers” were prominent in the Irish-English relations of the 1914 era, crucial years in 700 years of conflict.  In Ireland, descendants of English Immigrants to Ireland between the Norman Invasion of 1169 and before the Turdor Conquest of Ireland (resulting in the Plantation of Ulster by the English in 1609) were called “Old English.”   The Bartons were an “Old English” family and had considerable land holdings in Ireland. In 1876 the Bartons owned 1,542 acres in County Wicklow (19).  Robert Childers Barton was raised at Glendalough House near Annamoe, Ireland, along with his first cousin, Erskine Childers, whose parents died from tuberculosis when Erskine was an infant (8).  Despite English roots, Robert Childers Barton and his first cousin Erskine Childers played an important part in Ireland’s struggle for independence from England

In 1915, during World War 1, around the time Robert Barton was building Annamoe Mansions, his first cousin, Erskine Childers, was smuggling guns into Ireland on Erskine’s yacht, the “Asgard” (9, 10) to aid the Irish struggle against the English.  In 1921, three years after the end of World War I, the political activities of Robert Barton and Erskine Childers continued (18).  An Irish delegation met with a delegation from the English government to work out details of independence for Ireland. Robert Childers Barton and Erskine Childers were members of this Irish delegation. Lloyd George and Winston Churchill, current and future Prime Ministers of England, and members of the 1921 English delegation, threatened an “immediate and terrible war” against Ireland if the Irish delegation did not sign the treaty proposed by England. Faced with such intimidation, the Irish reluctantly signed the treaty giving independence to the south of Ireland (11). 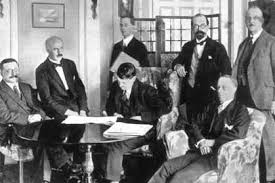 The irish delegation at the treaty negotiations in Londown. They are (seated) Arthur Griffith, Eamon Duggan, Michael Collins and Robert Barton; and (standing) Erskine Childers, George Gaven Duffy and John Chartres. Childers and Chartres were secretaries to the delegation and took no part in negotiations.

This treaty was supposed to end several centuries of conflict in Ireland resulting from English occupation. However, many people in Ireland did not want this treaty signed, because the Treaty resulted in a divided Ireland with 1/5 of the Island of Ireland in the north remaining a part of England and 4/5 in the south becoming the Irish Free State. An Irish civil war resulted. On one side of this civil war was the official government of infant Ireland, the “Pro Treaty” group led by Michael Collins. On the other side of the Irish civil war was the “Anti Treaty” group led by Eamon De Valera. The conflict resulting from the signing of this treaty is being played out to this very day in the violence in the north of Ireland. Erskine Childers and his first cousin Robert Childers Barton sided with De Valera’s Anti Treaty group. On Nov. 10, 1922 Erskine Childers was arrested by the “pro-treaty” infant Irish government at his home in Glendalough House in Annamoe, Ireland, for having possession of a revolver. He was executed by firing squad two weeks later. A twist of fate in this execution is that the revolver in question was given to Erskine Childers by Michael Collins, leader of the pro treaty group that arrested and executed Erskine, while Erskine and Michael Collins were fighting together against England for Irish independence. In 1973 Erskine Childers’ son Erskine Hamilton Childers, was elected the 4th president of Ireland. 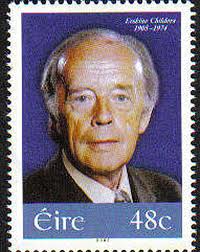 Robert Childers Barton probably had Annamoe Mansions constructed in 1914 as a potential source of income to hedge against the possibility of the Bartons losing their land in Ireland due to he and his first cousin’s stand against English occupation of Ireland.

Robert Childers Barton owned Annamoe Mansions until 1969 when he was 89. He sold the building to Cabrhel Holdings, the estate of deceased Joseph Herbert Conroy, MD, of Edmonton, Alberta, Canada (12, 13).  Joseph Herbert (Herb) Conroy, his wife Ruth, and family owned and lived for 36 years from 1941 to 1977 in the house, adjacent to the east side of the Annamoe Mansions.  The house was originally build by Canadian Senator Lassard   This house, still owned by a daughter of Herb and Ruth Conroy, Catherine Ryan,  was torn down in 2007 to be replaced  by the 5 story condominium called “Lassard Place.”

Joseph Herbert Conroy was one of a second Canadian-born generation from a group of 300 destitute Irish families from the south of Ireland which was sent, at government expense, in 1825, to Peterborough, Ontario, Canada.  Herb’s father, David Conroy, was illiterate and from the first-born generation of the immigrant group to Peterborough.

It is interesting to consider that 150 years after a destitute illiterate Irish family arrived in Peterborough in 1825, one of their descendants purchased the Annamoe Mansions in 1969 from a large landowner in Ireland. 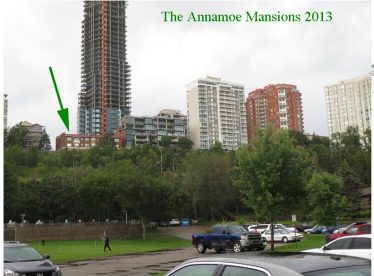 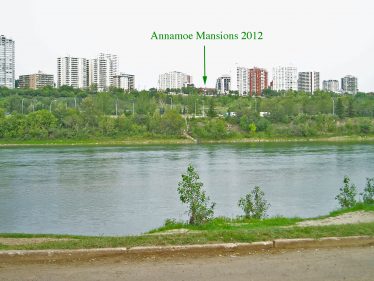 (3) David Robinson bought the property from the Hudson’s Bay Co. This info. was obtained on May 4, 2007 from the Land Records in the Hudson’s Bay Company Archives in Winnipeg, Manitoba, Canada.  The information is in RG1/40/4, Town site Sales Register,  in a book on Edmonton.  The Annamoe property is lot 8, Block 19.  The information was researched by Hudson’s Bay Archivist Kathy Mallett ( ph. 204 945-6401) and communicated by telephone to the author.  On May 7, 2007 Kathy emailed the author the following additional info:

“I just located another bit of information for you Bob.  I did find a very flimsy copy of a receipt from Robert Barton for $10,000 which he paid on November 14, 1922 (reference RG1/61/20).  This receipt cannot be photocopied because of its condition and location, and is found in the Deed Copy Book, Deed no. 1825.”

(7) Instrument #3933DP, Nov. 24, 1927, transfer of title of the Annamoe Mansions to Robert Barton at the City of Edmonton Land Titles Office.

(8) “Dangerous Waters, the Life and Death of Erskine Childers” by Leonard Piper, published by Hambledon and London, 2003.

(12) Caveat filed in City of Edmonton Land Titles office on 12 Feb. 1969, by Catherine R. Ryan (née Conroy) for Cabrhel Holdings Ltd., the Holding Company of the estate of J.H. Conroy.

(17) “Rupert’s Land” from Wikipedia, the free encyclopedia, on the internet.