You are here: HomenextPlacesnextARKLOWnextArklow Port

Most of the information in this article has been gathered from ‘Arklow – the story of a town’ by Jim Rees (ISBN 0-951-92393-5) and ‘Arklow Port’ published by Arklow Harbour Commissioners. 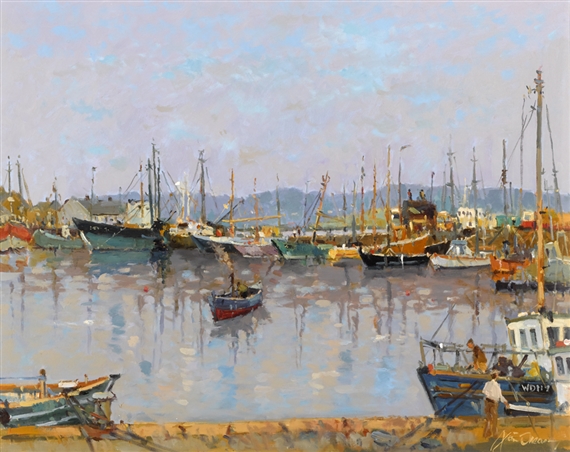 An Artists interpretation of the Arklow Port

There has been a settled community on the bank of the river Avoca for the best part of 2,000 years. It first received international recognition as a trading port in the 2nd century A.D. when the Greek cartographer Ptolemy included it on his map of the world. In 1169 the Normans Consolidated it as a town trading center. There exist Middle Age references to Arklow’s fishing and trading fleets, indicating that it was a long fixture of Arklow’s, and even Irelands, landscape during this era.

Although the port had a notable history, it wasn’t until the 19th century that steps were taken to revive the port. A mining company at Avoca, six miles up river, was granted a charter to improve the port to ensure regular exports of copper and later, sulphur to English Markets. By 1881, the mining interests control of the harbour had been bought out and real improvements were made under the Office of Public Works. But not all was well. The Local Herring fishery, which had became the mainstay of the town, dwindled from the 1880s. Though the decline was in part mitigated by the anticipation of a new factory to be built in the town.

The Kynoch and company arrival in 1895 at North Beach was sorely welcomed. In the wake of the towns recent decline, a boost in economic fortunes was clearly needed. In part out of desperation, every measure was taken by the town to accommodate the demands and needs of the Kynochs. Soon, the Explosive factory was in full swing and began to export munitions to almost every corner of the British Empire. Population figures at the time show that the town grew by 900 people upon the Factory’s arrival.

If there was any time in history that munitions were in demand, it was in, as it was called then, The Great War. At the beginning of the decade of the great war, was a dreadful outbreak of typhus fever. The Kynochs supported education and the development of health facilities in Arklow to mitigate the crisis. When the war began, both Irish and British Officials were making preparations. The Irish MPs, including John Redmond, saw an opportunity to take advantage of the port and Irish participation in the war effort to advocate for Home-Rule. Though the workers and Arklows citizens didn’t always see the benefit.

Inevitably British soldiers who were stationed at the port were treated much better than those who handled the munitions. Publicians in the town had to ‘accommodate’ at least three British soldiers. The drink then became a problem, so much so that the licensing hours were curbed. The Knochs covered the travel cost of workers who came from outside Arklow by train but the long unpaid hours became too much for the workers to bear, not to mention the long hours actually working.

Eventually the Kynochs came up with a scheme, which consisted of huts created along the bay area to house the commuting workers. The condition of the workers who lived in these huts was very poor:

“The huts were so crowded that a rope was placed along one wall so that the men could hang on to it while sleeping on their feet”.

Poor labour relations continued to plague the company. Munitions manufacture is an inherently risky job. No other time in the factories history was more true than at ‘The Explosion’ as it is known in local lore.

On the of September 20th to the 21st, 1917 at about halfpassed three, the guard at the main gate was changed and Pte Richard Craig of the Munster Fusilliers began his watch that was to end at six. Within fifteen minutes on the job, a brilliant flash lit up the countryside, followed seconds later by a deafening bang. Townspeople were thrown from their beds, windows were shattered and the blast could be heard twelve miles away. Twenty-seven people were killed in that tragic explosion. Contemporary reports state that no definitive cause was found.

End of an Era

As the first world war drew to a close, so did the demand for munitions. The closure of Kynochs lead to a lasting malaise in the towns, especially the ports, fortunes. In 1926, the population of Arklow was 400 heads lower than in 1886. The rise of Sinn Feín was sighted as one of the key reasons for the factories closure, but the poverty and unrest that ensued after the factories closure is said to have assured Sinn Feíns victory.

A Path to Modern Times

The Arklow port was put into the hands of local businesses, port users, public representatives and Ministerial appointees. In the 1960’s, the port began to be used by the N.E.T (now Irish Fertiliser Industries). In the 1970’s, the port was in dire need of repair, so a massive construction effort followed to repair the deteriorating quarry walls.

Today, the port is used to transport cargo to and from major European cities.