You are here: HomenextPlacesnextAVOCAnextAvoca West - Mining 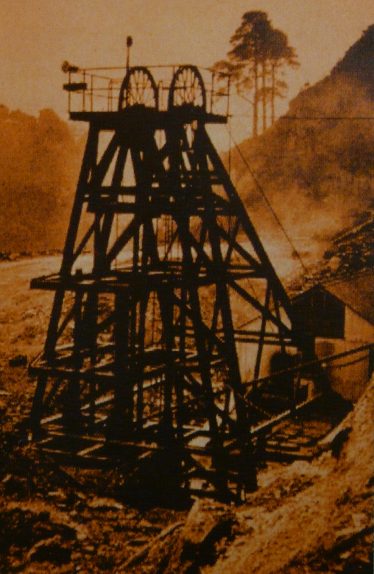 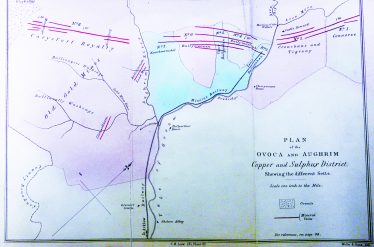 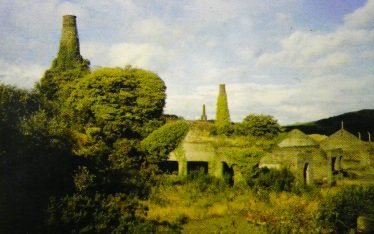 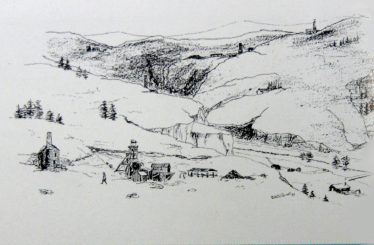 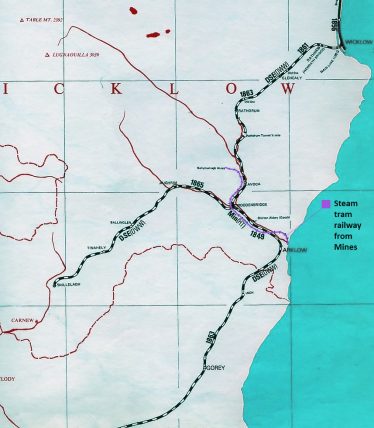 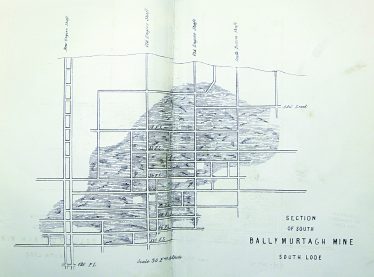 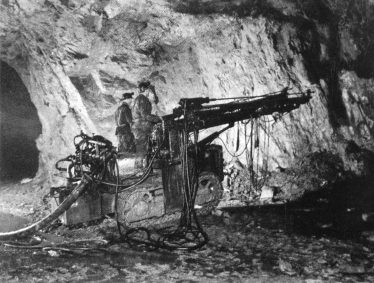 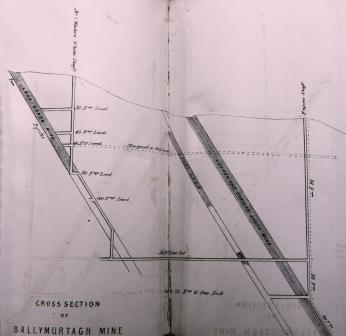 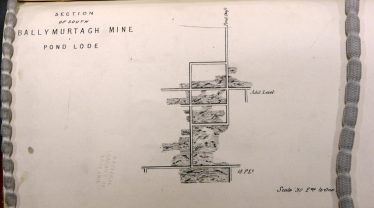 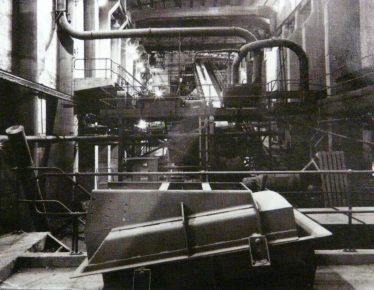 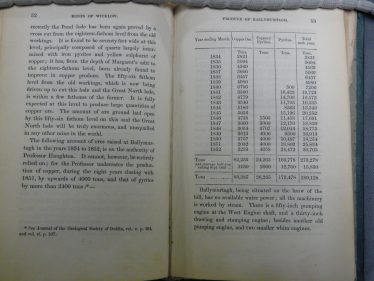 zoom
Production of Ballymurtagh
The Mines of Wicklow 1856 Published by C.H. Law, London 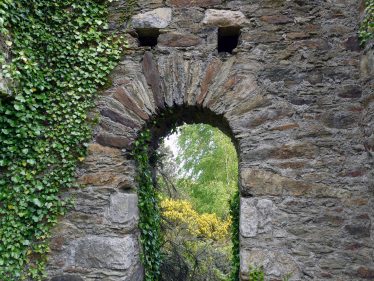 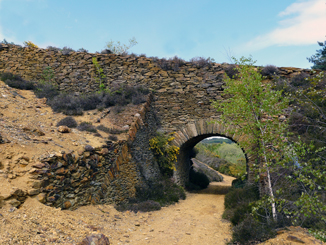 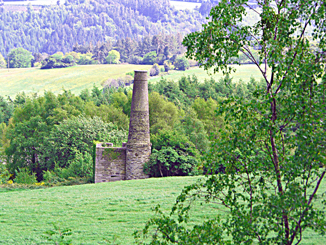 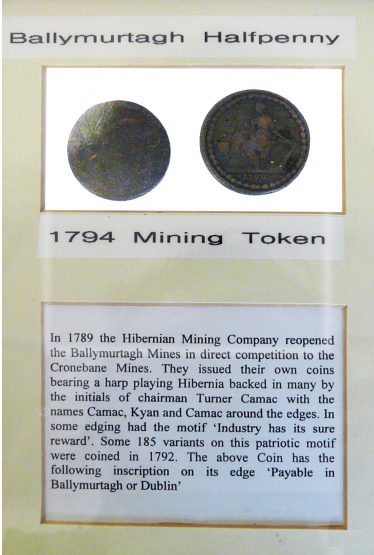 The Avoca mines were mined for copper and associated products dating back probably to Roman times, Ptolemy’s map of Ireland in AD 150 marks Oboka (Avoca), suggesting that the Romans knew of the Wicklow ore. According to Mulvihill “the Anglo-Normans and the Elizabethans all had mines there”.

Over the years entrepreneurs mined in West Avoca for copper, lead, suplhur and other minerals. A number were local, others came from England Wales and Canada.   Ballymurtagh was the oldest and most important mine. Companies were formed and local transport and technology infrastructures were developed using the cutting edge technology of the time to support the very profitable extraction of minerals including copper, lead, pyrites and ochre from these Avoca mines including the West Avoca Mines of  Ballygahan and the larger Ballymurtagh mines.  These companies  included the Hibernian Mining Co., The Wicklow Copper Mining Compnay, Avoca Mines Limited formed by Discovery Mines of Canada/Northgate and others,  St. Patrick’s Copper Mines Limited (formed by Mogul)  The Wicklow Chemical and Manure Works, Via Cellia Colour Company, Mineral Grinding Company and laterly Kynochs,  Irish Gypsum, Nitrigin Eireann Teoranta and Irish Fertiliser Industries. Both Kynoch and Irish Fertiliser Industries were taken over by Imperial Chemical Industries.

Associated with the extraction of copper the  Avoca mines had plenty of iron pyrites (Fools Gold) from which sulphur is extracted.  Sulphur was a key ingredient in many processes including the manufacture of artificial manure/fertilisers. It was sold to the local fertiliser factory for the manufacture of sulphuric acid before the advent of Nitrigin Eireann Teoranta (NET) in the 1960’s (Mulvihill  2002 p 457).

Sulphur, extracted from pyrite, while considered a secondary product to the extraction of copper ore from the mines, was at times very profitable especially when usual global sources dried up for example in Sicily around the late 1830’s. Sulphur is also a vital component in munitions manufacture which the Kynoch factory in Arklow utilized after acquiring lucritive Boer War contracts. It is of note that the chairman of Kynoch was Arthur Chamberlain who was the Uncle of Neville Chamberlain the English Prime Minister and this connection was important in the Kynoch’s fate.

Pyrite, Sulphur, Copper and other Minerals

According to Thomas and Mc Ardle, the bedrock of the Avoca mines consists of volcanic ashes which accumulated on the ocean floor where jets of metal rich and exceedingly headed waters

“were injected into the cold seawater causing the metals to precipitate out as a thin blanket of suplhite.  This chemical activity altered the composition of the volcanic ashes containing metal deposits and this dark green ash is a reliable guide as to where such deposits may be found”

Pyrite and iron sulphur which is found in the mines was used for making munitions and later in the manufacture of fertiliser. Sulphur is formed from vapours in the crevices of rocks.   Ochre was mined on a small scale until the 1940’s. Copper has been mined in Avoca since the mid 1700’s. The ore bodies in Avoca are sheets which are 2/20 meters thick and deeply deposited (Thomas and Mc Ardle 1998).

A written account of the mining landscape in Avoca stated that

“the face of nature appears changed and instead of the grassy and wooded slopes of the gray rocks which beatify the rest of its course we see a broken surface of chasms, ridges and hillocks, glowing with tints of bright red, brown, shades of yellow an vivid green which even the boldest artist would scarcely dare to transfer to his canvas” (Wicklow 1856).

At one stage these mines were a great source of ‘brimstone’ which is the commercial name for pure sulphur.  The great pyrite beds of Wicklow “were the only great source of bisulphuret of iron in the United Kingdom”.  Manufacturing in general depended on sulphuric acid.  It was stated that “our whole manufacturing system” could be  “dependent on Wicklow for the supply of sulphur”.  Sulphur’s uses include soap and glass manufacture, bleaching and dying also the making of potash for gunpowder. The process of getting sulphur from pyrites was carried on at Ballymurtagh by the Hibernia Mine Company  (Wicklow 1856).

According to Edward Barnes who was a director of the Wicklow Copper Mine Co. which owned Ballymurtagh, the rock in which the mine is situated is clay-slate and sometimes schist.  The part in immediate contact with the ores is called “killas” ranging in colour from blue to gray and it breaks into pieces which have a smooth silky texture also there are occasional ribs of quartz near the ores.

Originally ore was reached by tunnels called adits which were driven into the side of the valley.  For drainage purposes they were built at a slight uphill gradient.  Up until the mid 1800’s men had to drill holes in the ore using a drill and sledgehammer and using a tallow (animal fat) candle as lighting.

The drill holes were then charged with gunpowder and exploded to break the rock into shovel amounts and then pushed out to the surface.  About 500-1000 cartloads per day were needed to haul the loads to Arklow port and then shipped into the larger ports of Dublin and Dunlaoghaire.

By the mid 1800’s various methodolgies were imported from England.  Steam engines were used to provide power for hoisting, pumping and crushing.  Hodgson had them installed in his mines. Water wheels were used at river level at Ballygahan some up to 50ft in diameter. These were used in the shallower areas and rods of iron were attached to the water wheels which transmitted power uphill to pumps in the shafts.

One of the mining techniques which is used outside Ireland is called the ‘Avoca Mining Method’ and it can still be found in mining manuals. The modern equipment meant that ‘spoil heaps’ could be reinterrogated and turned into a saleable product (Thomas and Mc Ardle 1998).

The chemical complex making sulphuric acids, bleaching powder and artificial manure. It was situated on a tidal mudflat near the beach. The engineer John Morrison directed that walls be built high enough to keep out flooding. The factory was built on top of the walls and connected to the North Quay by a narrow causeway. Within the complex there were coke ovens for making gas, limekilns, pyrite burners, cast iron chambers for the making of sulphuric acid and equipment for making bleach and manures.  The artificial manure was the mainstay of the market. This business was being conducted in the mid 1800’s. Later in when NET later known as Irish Fertilizer Industry (“IFI”) was being formed in 1962, the reasons for locating it in Arklow included the availability locally of both limestone and sulphur bearing pyrites at Avoca.  NET and later IFI manufactured fertilisers and some by products such as carbon black used in cableing carbon dioxide for soft drinks and urea for the plastics industry (Cooper and David 2004). A by product of some chemical processes in NET was the production of gypsum to make plasterboard by a NET subsidiary called Arklow Gypsum (Brochure 1980).

Before the famine the ore was brought to Avoca port by horse transport which was very labour intensive, with the fall in population during the famine years an alternative method was sought to transport the very lucrative ore and sulphur to the port.  Henry Hodgson built a steam tramway in 1847 from the Ballygahan mines to the port of Arklow and sold most of it to the main rail providers at the time which were Dublin Wicklow & Wexford Railway (DWWR)   in 1961 for £30k.  This was the time when canals, railways, ports and transport methods in general were being developed and the then Board of Works lent Arklow harbour £1k.  The port of Arklow up to 1845 was in “the worst possible state” according to Barnes, “the river running out to the sea through a shallow crooked passage about a half mile north of its’ present exit, spreading its course over the adjoining marshes and sandbanks and causing the shipment of ore great difficulty and expense.  Barnes went on to say that the Hibernian Mine Company enclosed the banks of the river by building substantial walls and made a direct passage out to sea and erected strong sea piers. According to Heritage Ireland Hodgson controlled the port until 1872 which meant that the East Avoca companies could not use the port. According to Rees the government offered grant of £13,000 to improve the harbour and also a loan of £13,000 both to the Wicklow Mining Company. This did not happen however in 1881 the Wicklow Mining Company agreed to sell their rights to the port for £5,000 thus relinguishing their control and subsequently The Arklow Harbour Act (1882) was passed  and the port came under the Board of Works and later under the local commissioners. The new pier was completed in 1885 (Rees 2012).

A railway station at Shelton Abbey opened in 1964 to serve the NET factory, it was used in the 1970’s and such was the requirement for fertilizer transport that special trains were run from this station to Dublin. The first load was dispatched in 1965 (Shepherd 1974).

Here there are displays of interesting material from the Avoca Mines including photographs from the National Library of Ireland Lawrence Collection. There are also some detailed mining maps, tools, coins and memoirs from miners both sides of the Irish Sea.

Buildings in the Port

The Irish Gypsum building which is a reminder of the Chemical industries which thrived in the port of Arklow.  Some of the loading bays are still in evidence.  The NET (IFI) factory in the Shelton Abbey townland is currently being used by Holfelt Plastics Limited.

Apart from the very colourful yellow spoil heaps in Ballymurtagh mine, there is a fine bridge called the ‘Tramway Arch’ crossing a mine road. Some engine houses remain.  The Arklow Mines Limited head office remains as a derelict building to the right of the entrance to the Landfill, as do some ‘Mincon’ Mining Machines. There are quite a number of photographs on FLICKR.

This recently developed trail in Arklow consists of a series of 6 panels, starting at the Bridgewater Centre, continuing along the North Quay and finishing near the Arklow Bay Hotel charting the story of the Kynoch factory and it’s significance to the town of Arklow.

Alan, Thomas and Mc Ardle, Peadar. 1998 Avoca our Mining Heritage: A Brief History of Metal Mining  in the Vale of Avoca. Geological Survey of Ireland.

Heritage Ireland. Exploring the Mining Heritage of Co. Wicklow. Available at: http://www.heritagecouncil.ie/fileadmin/user_upload/Publications/County_Heritage_Services/Wicklow/Mining_Heritage_of_Co_Wicklow.pdf (Accessed on 9 May 2015).