You are here: HomenextPlacesnextARKLOWnextThe Forgotten Fishery of Arklow

The Forgotten Fishery of Arklow 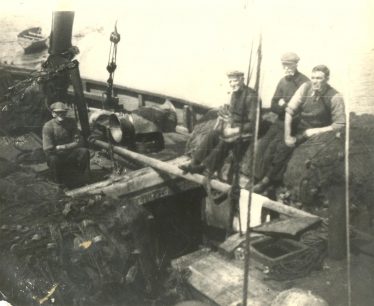 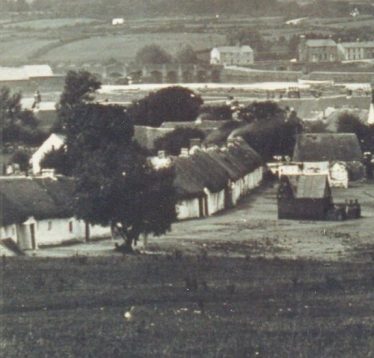 In 1836, the County Wicklow town of Arklow was one of only six ports whose fishermen were ‘constantly engaged in fishing’, that is having no other means of livelihood. These men and their families generally occupied an area known as the ‘Fishery’, a town-within-a-town that flourished between 1800 and 1950.

As the last generation who knew it as a reality fades away, the name is heard less and less and already two questions need to be asked – where was it and, perhaps more to the point, what was it?

References to fishing grounds off Arklow can be found in Patrician legends and medieval documents. Over the centuries the activity and the area became synonymous, so that by the 1800s the ‘Arklow Fishery’ denoted both the practice and the place. The entry for Arklow in Lewis’s Topographical dictionary (1837) begins; ‘This place … appears to have been occupied as a fishing station since time immemorial’. At first glance, ‘this place’ might refer to the town as a whole, but the article goes on to say that ‘[Arklow] is divided into the Upper and Lower Towns, which latter is called the “fishery”’.

This separateness had already been observed twenty years earlier by the parish rector, Revd Henry Lambart Bayly, who wrote ‘[the fishermen are] a race distinct from the other inhabitants, occupying a separate part of the town’. The centrepiece of his article in William Shaw Mason’s Statistical account or parochial survey of Ireland (1816) is a map in which the ‘Town of Arklow’ and the ‘Fishery’ are clearly separate entities.

Griffith’s Valuation, compiled for Arklow in 1854, also cites ‘The Fishery’ as a distinct location, even though it was never officially designated a townland. In fact, of 917 Arklow properties 471 (over 51%, mostly of the poorest quality houses) are listed as being in the Fishery. Given this semi-official status, it is surprising that it does not appear in Liam Price’s Place-names of County Wicklow (1967). Despite Price’s omission, the Fishery was a substantial and recognised location.

Pin-pointing its location is more difficult than establishing its ‘separateness’. Contradictory demarcations throughout the nineteenth and twentieth centuries show that its boundaries were not fixed. They were prone to move seaward as the poor built more houses on the eastern fringe, especially during rapid increases in population in the early 1800s and again in the aftermath of the Famine; while the western edge, abutting Main Street, grew more prosperous and was thus subsumed into the perceived respectability of the ‘Upper Town’. Despite its shifting locale, there was a general understanding what part of the town was implied when the ‘Fishery’ was referred to.

What was the ‘Fishery’?

The Fishery should not be viewed as a specific set of streets and lanes, but as a community with a distinct heritage and lifestyle. Families whose livelihood was gleaned from the sea but who lived in lanes at the west end of the town and off Main Street were as much part of the ‘Fishery’ as those who lived in the eastern end adjacent to the harbour. It was not so much an address as a way of life.

This is fundamental to understanding not only how that community worked, but how it came into being, evolving from a centuries-old fishing industry, and how it disappeared when that industry faded into insignificance as the local economic base changed in the first half of the twentieth century.

A way of life

The Fishery’s identity was shaped by its relationship with the sea, the lives of its inhabitants regulated by the various types of fishing throughout the year. A different calendar to that of land-based people was created and adhered to, and this had wide-reaching implications. For example, the fact that many of the men followed migratory shoals of herring and mackerel led to serious misrepresentation of population figures in the Fishery when censuses were taken. The 1901 census was taken on 31 March, and the 1911 census was taken at roughly the same time of year. Each shows a remarkable scarcity of young and middle-aged men in the Fishery – they were mackerel fishing off Kinsale and Baltimore.

The same nomadic nature of their profession makes it difficult to chart their professional successes and failures. Catches, quantified by tonnage and monetary value, were recorded at principal landing ports such as Kinsale, Dublin and Ardglass. The port of Arklow had not been sufficiently developed to become an official landing station, so catches by Arklow fishermen are for the most part lost in regional and national figures, making the true value of their work to their community impossible to ascertain from official data and is better indicated by secondary, perhaps more anecdotal sources.

These anecdotal sources repeatedly refer to the community’s fortunes fluctuating between relative affluence and penury. They also agree that such was their affinity with the sea that even in times of greatest hardship the fishermen would not engage in other forms of work. They had, however, no objection to their wives and children augmenting the family income by mending nets and selling fish.

Hard task-master though the sea could be, it gave them a degree of economic independence unknown to the small farmer or landless labourer and helped shape their dealings with authority. They might show deference to secular power and position when so inclined, but that did not mean they were submissive to it. An example of this was their blatant disregard for the law banning daylight drift-net fishing for herring in the late 1890s. At first they simply ignored it, then they forced through legislative change more suited to their requirements. This success indicates both a well organized ability to lobby and, perhaps, a justification of their boast that their fleet was the ‘best manned and best equipped in Ireland’.

This independent streak also seeped into their relationship with religious authority. They followed or ignored the strictures of their successive parish priests as they deemed appropriate to circumstances. For example, in 1812 Fr Edan Redmond complained to the archbishop of Dublin that the fishermen had formed a combination (a union or cartel), taking an oath not to sell oysters below an agreed price. He condemned the practice and ‘explained to them the nature of an oath and the criminality of taking one unless accompanied by the conditions prescribed by God Himself’. Receiving their assurances, he was ‘confident that it would not happen again’, but he soon discovered that his confidence was misplaced.

Even after the 1860s, when parish priests had became their de facto spokesmen, they continued to practise pre-Christian prayer and ritual in tandem with more orthodox observances. An example of this twin-track approach was practised on 1 May each year. Bluebells and primroses were laid on the doorstep the night before to welcome the Virgin Mary, to whom the month of May is dedicated by the Catholic Church. Later that day a bonfire of furze bushes (called gorse or whin elsewhere in the country) was lit and danced around to welcome Belenus or Bel, the Celtic god of summer. This welcoming of both the Virgin Mary and a supposed rival on the same day by the same people indicates the level to which the two belief systems could be accommodated.

In further bids to hedge bets, demarcation between prayer and piseog was often blurred. If a mirror were used for washing and shaving on board a boat, the user had to avoid the bad luck of having the reflection of the moon in the glass; a boat should never head north (away from the sun) as it exited the harbour, even if the destination lay to the north; and a boat should be turned towards the sun immediately prior to ‘shooting’ (casting) the nets. These deferences to – perhaps reverence of – the moon and the sun sat in comfortable co-existence with the sprinkling of holy water over the nets before shooting, the crew also received a light sprinkling. The nets were then shot over the starboard side with the words ‘away nets in the name of God’. Starboard was favoured as that was the side over which Jesus supposedly told Peter to cast his net. Once the nets were shot, there was nothing to do but wait and hope – and recite the rosary.

The Fishery community was not homogenous; it comprised different communities of interest. Sources such as the List of claims for the relief of suffering loyalists (1799), documents in the State of the Country Papers, and RIC reports show that there were diverse political and religious allegiances. Sometimes these divisions led to sectarian tension and conflict, from the 1798 rebellion and its aftermath to the twin campaigns for Home Rule and land reform. Perhaps surprisingly, many Arklow fishermen took a very active interest in the Land League.

The sea may have been the one unifying element, giving Catholic, Protestant and Dissenter the same livelihood, the same pattern laid down by the fishing-season calendar, but it did not make them clones.

One of the most striking features of the Fishery was the important role played by the women. Because of the absence of the men for considerable periods, the women not only controlled the domestic sphere but they also dealt with matters usually considered to be part of the male domain. Their literacy levels, as recorded in the 1901 census, were higher than those of the men, although this comparison might be skewed because of the inadequacies of the census returns referred to above. The high rate of female literacy (79% compared to 54.5% for men in the Fishery and 72% generally in County Wicklow) was mainly due to the Sisters of Mercy who began teaching the girls of the town in 1876. Their education included not only literacy and numeracy, but also the importance of personal, domestic and community hygiene.

Better education often results in higher expectations, and it is likely that this was one of the driving forces behind not only improving living conditions in the Fishery, but also in the eventual migration of families out of the area and into new public housing developments in the first half of the twentieth century. With this transference of population, a way of life and the flexible locale known as the Fishery were entering their final stages.

The demise of the Fishery was a protracted affair. With each new council housing scheme from 1910 to 1950, families left the congested lanes for new homes in areas that had been green fields. Those who remained in the better houses of the Fishery still spoke of it as a separate entity, but it had become more a nostalgic touchstone than the vibrant community it had been for over a century.

Today, new arrivals into the area, Irish and non-Irish, know nothing of its past and refer to where they live by the appropriate street names rather than ‘in the Fishery’. This is understandable. The Fishery does not appear on modern maps, road signs or nameplates, in electoral registers or census forms. It is a place-name only in the mental landscape of a diminishing few and in a decade or two it will have dropped out of usage. When that happens, the fact that it had once existed will be forgotten, and the lives of the people who lived in that part of Arklow – that ‘race distinct from the other inhabitants’ – will be of relevance only to the historically curious.