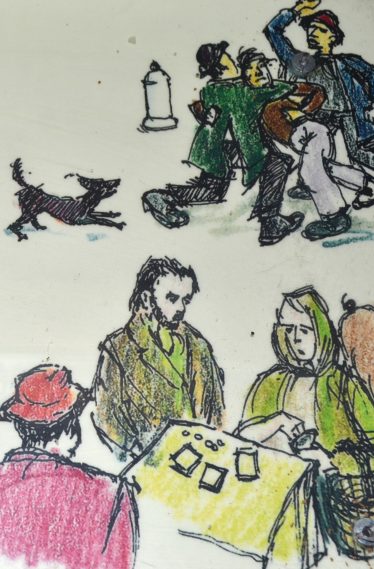 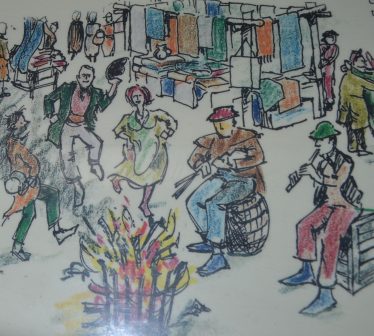 Baltinglass had a market every Friday and six big fairs a year. This is Baltinglass on February 2nd, the date of the winter fair. The temperature in Ireland was lower than it is today and snow and ice were more common than they are now.

The Stratford family held the rights and responsibilities for the fair days. In 1780, the holder of this right was Edward Augustus Stratford, second Earl Aldborough. One of his titles was Lord Baltinglass.

Begging was very common. One begging scheme was particularly notorious. Abandoned babies were sent to the Foundling Hospital in Dublin. These babies could then be taken by a woman who was given a fee to look after them. But there were many cases where the woman simply went on the road and used the baby as an aid to begging. There are even recorded cases of the babies being deliberately crippled in order to create a greater sense of pity. If such a woman was caught she could expect severe punishment.

A winter fair was a good time to sell cloths such as wools, which men and women on the farms wove during the long evenings. Travelling peddlers provided a chance to buy a great variety of goods, from hats and shoes to farm tools, pots, pans, even china and glass.

The arts of dancing and fencing were taught by journeying masters. Many tricks were tried at the fair. For example, a trader might shave the edges from a silver coin. Eventually he would have enough shavings to forge a new coin. As the day went on there was plenty of drinking and entertainment. This could range from harp or pipe players to puppet shows. Hucksters and gamblers tried to take advantage of the lively scene to remove hard-earned money from innocent farmers. The fair day often ended in rioting and brawls. A law was passed forbidding the throwing of snowballs, because it often led to fights.