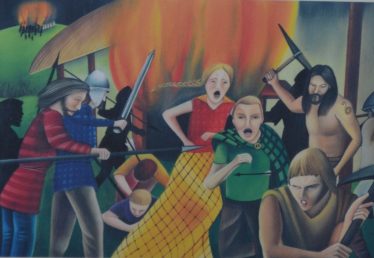 It was the job of poets to memorise stories and sagas, and recite them in the long winter evenings as the king and his retinue were feasting. Many of the sagas, myths and legends that the Celts enjoyed were concerned with warfare.

The saga Bóruma Laigen (Cattle-tribute of the Leinstermen) is based on historical events of the seventh century and tells the story of wars between rival kings in west Wicklow. One incident involves the raths around Baltinglass. The hero, Brandub, was threatened by Cummascach, a king of the dominant Uí Néill clan. Cummascach demanded his traditional right to sleep with Brandub’s wife. Brandub pretended to agree but secretly sent his wife away, then allowed his enemy into the hall at Belach nDubthaire (Baltinglass). That night, while the king and his three hundred followers feasted, Brandub set fire to the hall and slew his enemies as they fled.