Baltinglass - The Arrival of the Normans 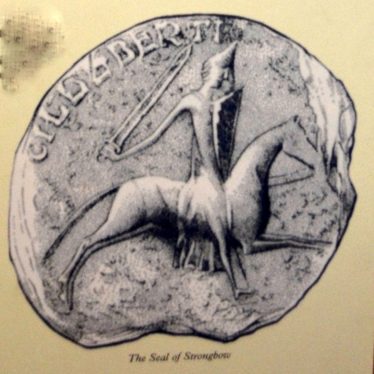 It was the same Diarmaid, king of Leinster, whose actions led to the arrival of the Normans in Ireland.

In 1152 Diarmaid stole Dearbhforghaill (Dervorgilla), the wife of Tighearnán Ua Ruairc (Tiernán O’Rourke). At once and forever Tighearnán became Diarmaid’s bitter enemy. In the wars which racked all of Ireland from 1156 to 1166, these warrior kings took opposite sides. Eventually, Diarmaid was defeated and his strongholds burnt. He had no choice but to flee the country.

He sought out King Henry II of England, who was campaigning in France, and asked for his support, swearing an oath of loyalty in return. The best Diarmaid could get from the King was a letter encouraging the King’s Anglo-Norman subjects to aid Diarmaid in his cause. Diarmaid found the man he needed in south Wales, Richard FitzGilbert de Clare, better known to history as “Strongbow”.

Strongbow drove a hard bargain, agreeing to come to Ireland, but only in return for the hand of Diarmaid’s daughter Aoife and the right to succeed Diarmaid as king of Leinster. It was this agreement that sparked the Anglo-Norman invasion of Ireland. They landed first at Bannow Bay on the south coast in May, 1169.

During the remainder of the twelfth century and on into the thirteenth century, new Anglo-Norman families established themselves in the south, east, north and centre of Ireland.

The land occupied by the monastery in Baltinglass fell under Norman control. The descendants of Diarmaid lost their title to the kingship of Leinster, but they remained secure in their mountain fastness of central Wicklow.