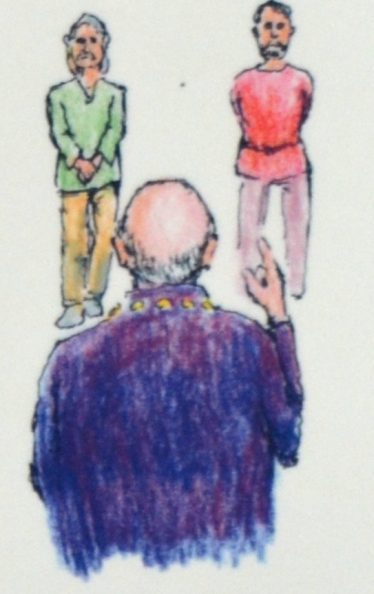 Ireland had a complex system of law known to us as Brehon Law. The laws were a combination of ancient Celtic thinking and Christian ideas.

They cover a great variety of situations, which build up to give us a good picture of the Irish way of life. It was the job of skilled men in the society to memorise these laws and, when called upon, to make judgements. These judges were called Brithem.

The judge had to take his job seriously. It was thought that if he made a bad judgement then the people would suffer disease and famine. The key to the system is the idea of status. Each person had an “honour price” or lóg n-enech, which means literally; “the price of his face”. This honour price indicated the worth of a person.

One surviving text tells us that the honour price of a king was fourteen cumal (female Slaves). If a man broke his word to such a king, or did him an injury, this price would be used to calculate a fine.

The king ruled over a tuath. A tuath was made up of his family and kin. The tuath was spread over a number of raths. With status went responsibility. One piece of Brehon law teaches the king his tasks.

“If you are a king you should know the prerogative of a ruler, refection according to rank, contention in the host, cudgels in the ale-house, contracts made in drunkenness, valuation of lands, measurement by poles, augmentation of penalty, theft of tree-fruit”.

There was even a law about beehives:

“If it be a place where there are many bees, and a swarm has escaped from every hive…{and} the swarm which he follows enters the land of a neighbour near to them all: they divide between all half the produce of that swarm for three years”.