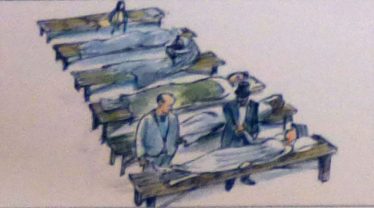 Baltinglass Fever Hospital was a substantial building. It was intended to serve as the second hospital in Wicklow. It had four wards of twenty beds. Two resident surgeons were in attendance, Edward and William Heath. A surgeon could perform operations – with very little in the way of anaesthetic – but was expected to deal with all kinds of human ailments. The apothecary (or chemist) was John Johnson. He was responsible for the supplying and making of medicines.

One of the main fears in 1841 was the spread of “fevers”. These included such diseases as cholera and typhus. There was very little the surgeons could do for such patients, as people had no idea what caused the illness, how it spread, or how it could be cured. The best they could do was to provide patients with warmth, food and hope. For example, we now know that infected water brings cholera. The water was a danger to anyone who drank from it, rich or poor. Typhus was a big threat to the poor. The disease was carried by a louse or flea, which originally had been transported in clothing all the way from India. It bred like lightning in the squalid conditions of the Poorhouse.