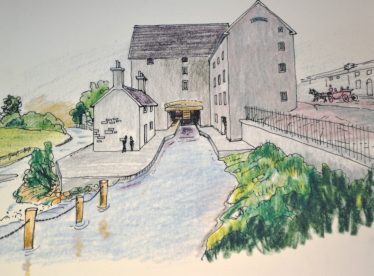 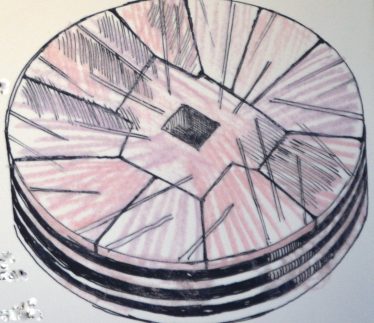 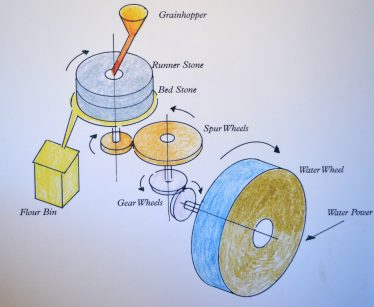 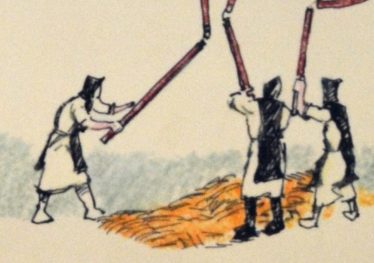 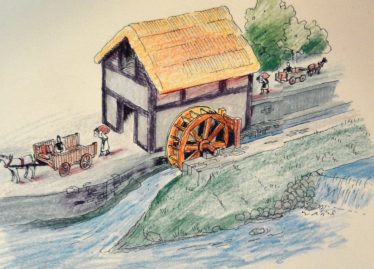 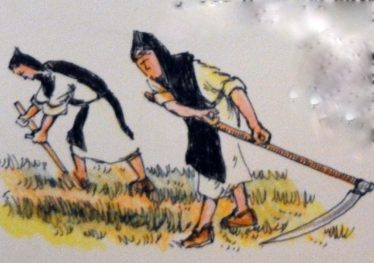 Farmers brought their grain to the mill to be ground into flour. In 1758, the government offered extra money to farmers who sold their grain in Dublin. This provided a good incentive for Baltinglass grain-growers to produce as much as they could.

By 1780, the mill had become a large, multi-storied building. It was still reliant on water power but many improvements were made, vastly increasing the quantity and quality of flour that was produced.

The mill at Baltinglass contained at least a dozen pairs of these huge millstones. The hard, durable stone comes from quarries such as the one at Hook Head, Co. Wexford. The rock arrived in wedge-shaped pieces. These pieces were cemented together with plaster of Paris. The circle created was bound with a hot iron band around the rim. This contracted as it cooled to hold the wedges firmly together in a single stone. The grinding faces of a pair of millstones were cut to form sharp grooves, which radiated out from the centre. When two stones were turned, these grooves acted like a scissors on the grain. The preparation of the faces of the millstones was known as “dressing”.

As the monks brought more land under the plough, they had to work further and further away from the main Abbey. They built stone barns in the fields, where they could store grain and tools, house animals, and sleep if they needed to.

The Latin word for barn is ‘grangia’, and is the origin of Irish placenames containing ‘grange’.

The grain was threshed and winnowed and given time to dry in specially-built stone kilns.

The grain still had to be harvested by hand, but the monks had a scythe. A scythe is a two-handed tool, which can be used to cut the grain down near the soil. Grain can be harvested more quickly  than with the old sickle.