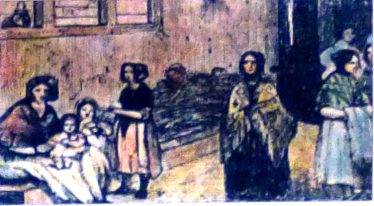 In times of absolute desperation a family could present itself to Baltinglass Union Poorhouse for relief. The Poorhouse was a harsh and grim place. The whole family had to come into the Poorhouse. The authorities feared that otherwise parents might use it to abandon their children. Once the family was inside it was split up into separate groups:

– Males above fifteen years of age

– Boys between two and fifteen years

– Girls between two and fifteen years

Even though the family was in the same building, they were all separated by high, bleak walls and could not talk to each other. Babies and toddlers were permitted to stay with their mothers, but were taken away from them when they reached the age of two. The diet was poor and small. Dinner was no more than two pounds (less than 1 kilo) of potato and half a pint of milk. Compare this with the 12-14 pounds (6 kilos) that the normal labourer might expect to eat. Supper was six ounces (150g) of bread. And there was no saying how stale and coarse this bread might be.

In order to prevent “idleness”, hard labour was demanded. This might either be useful – such as Baltinglass tradesmen using the poor for piece-work, or useless – such as grinding grain by hand. The Poorhouses were feared and hated institutions.