You are here: HomenextPlacesnextBALTINGLASSnextBealach Conglais - How Baltinglass got its name

Bealach Conglais - How Baltinglass got its name 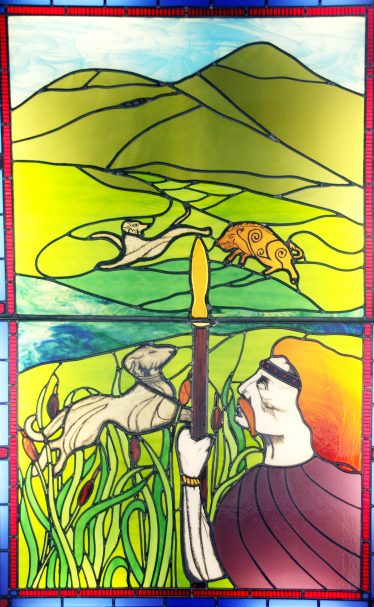 The origin of the name Baltinglass is buried in legend.  The story is preserved in early Irish prose and verse texts called the dindsenchas, composed to explain place-names.  One version says that Glas was the seventh son of Donn Desa and was fostered by Eterscél Mór, High King of Ireland.  He was raised at Tara and was given charge of the pack of hounds (conairti) of Eterscél and later of Conaire (Conaire Mór, High King).  One day Glas and his hounds hunted a wild boar from the plain of Tara southwards to a pass (belach) where the boar, the hounds and Glas fell.  This place became known as Bealach Conglais, evolving in time into Balkingglass and eventually Baltinglass.  Eterscél and Conaire supposedly lived about the first century AD or earlier.

Another account, written in verse, suggests that there was more than one boar but gives little detail, mysteriously referring to ‘the enchanted swine of wizardry’.  Liam Price, in The Place-Names of Co. Wicklow, suggests that this was an abbreviated reporting of a version referred to by Eugene O’Curry as only partially surviving in the Book of Lecan.  O’Curry, writing in the 1850s, refers to the hunter as Cuglas.  Cuglas pursued his quarry into a cave and was never seen again.  O’Curry says that this gave rise to the name Uaimh Bealach Conglais, meaning ‘the cave of the road [or pass] of Cuglas’.  His commentary on the cave suggests that he thought the name referred to the cairn or passage grave on Baltinglass Hill known as the Pinnacle.  Price seems to be of the same opinion.  However, popular belief in Baltinglass in the late twentieth century pointed to a narrow fissure at Carsrock, just below the Holy Year Cross as the legendary cave.

The illustration is a stained glass depiction of the legend made in 2012 by 5th Year students of Scoil Chonglais, under the guidance of the artist Stephen Moss of Blue Glass Studio and coordinated by their teacher, Ann Deeney.  The stained glass panel was installed as a permanent fixture above the entrance to the school.