You are here: HomenextPlacesnextBALTINGLASSnextCrossoona Rath 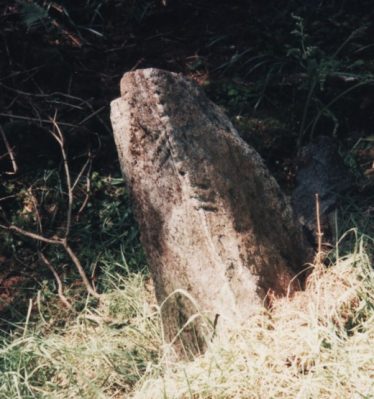 One of the many sites of interest on Kilranelagh Hill near Baltinglass is the 61-70m ring fort called Crossoona (pronounced “crish-oona”) Rath. It is overgrown with trees, and you could easily walk inside without realising you were in it. “The remains show that this was an ancient and important site, but nothing is known of its history” (Liam Price, The Place-names of Co. Wicklow). The ogam stone in the fort may provide a clue. The letters read “voti”, which has been interpreted as foth = “law, claim, right” or fotha = “base, foundation”. The meaning of Crossoona is unknown, but it could be derived from crois uaithne – Junction Cross. A lot of historical, legendary and mythical activity took place in the vicinity.

Crossoona Rath is a prime candidate for the home of any of those prominent figures, being a spacious enclosure situated on the southeast slope of the hill, and so protected from the weather on the north and west by the bulk of the hill, on the north by the higher Spinans Hill, and on the east by the much higher Keadeen.

The 1798 rebel leader Michael Dwyer and eight of his men were taking a prisoner at a house near Kilranelagh Hill when they became trapped by 100 Humewood horse and foot, 200 Antrim Militia, and 100 Hacketstown yeomen under William Hoare Hume. They took refuge in a ditch. When Hume approached them to request their surrender, Dwyer forced him to back down, and in the resulting uncertainty Dwyer and his men made their way to Crossoona Rath. After a running fire-fight in which one of his companions was killed, Dwyer and the remaining rebels managed to take refuge in the bog between Kilranelagh Hill and Keadeen, set alight a cottage and barn, and escape in the smoke.

Sources: Tales of the Wicklow Hills and Irish King and Hero Tales by Richard Marsh