You are here: HomenextPlacesnextBALTINGLASSnextThe Grace memorial stone at Baltinglass Abbey 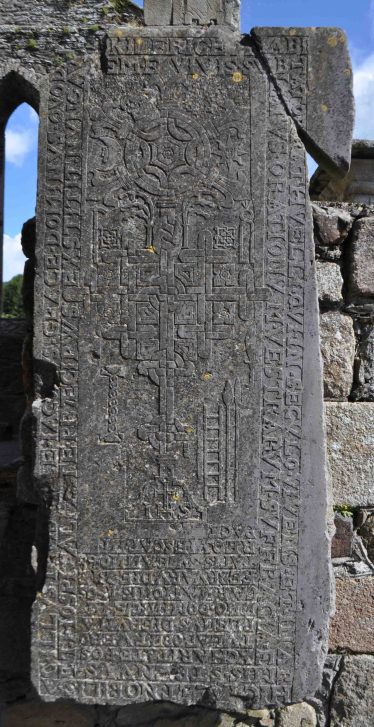 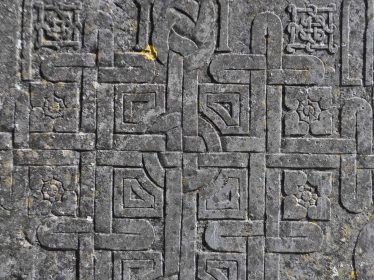 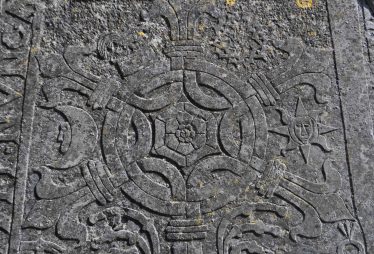 The finest example of an early 17th century monument in Wicklow can be found at Baltinglass Abbey. The stone is presently set in an upright position, but originally it would have formed the flat top of a chest or altar tomb. The stone commemorates a James Grace who lived in nearby Rathvilly (Co. Carlow) and who died in 1605. At this time the former Cistercian monks of the abbey had long been evicted from the site following the suppression of the abbey in 1536. However, the abbey church continued to be used as a place of worship for some time after, and the surrounding graveyard continued to be used throughout this period, right up to the present day.

The Grace memorial stone is very ornate and features a centrally placed cross composed of broad interlace strapwork. Above this is what could perhaps be described as a decorative sun burst, comprising a central Tudor rose and five rays, each with a fleur-de-lis terminal. The stem below the cross terminates in a small base that frames an IHS. At various points around the cross are a wide range of Symbols of the Passion, including the cock on the pot, crown of thorns, the moon and sun, the hammer, two flails, the pincer with three nails, the pillar and two ropes, Peter’s sword, three dice, thirty pieces of silver, a ladder, the spear and the sponge. The inscription around the edge of the stone is in Latin and when translated into English reads;

“Here lies that noble and illustrious man, James Grace, formerly of Killerige, an inhabitant Rathvilly, who, when living in the world, was both courageous in war and distinguished in hospitality; but now, being taken from among the living, he craves, of your charity, the support of your prayers. He died truly full of days, in the year of Our Lord’s Incarnation 1605 on the 23rd day of February, in the 68th year of his age. May he rest in peace.”

For a full description of this stone see Siobhán de hÓir 2005 ‘The 1605 graveslab from Baltinglass Abbey.’ In T. Condit and C. Corlett (eds) Above and Beyond essays in memory of Leo Swan, 415-421. Wordwell.