You are here: HomenextPlacesnextBLESSINGTONnextReturn of WWI Medals to Granddaughter of Wicklow Soldier

Return of WWI Medals to Granddaughter of Wicklow Soldier 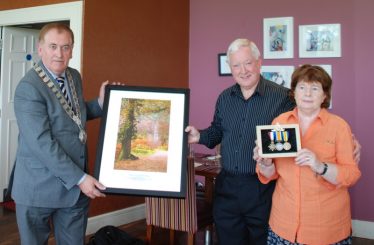 It was a very emotional day for Blessington woman Vera Kavanagh. After almost 100 years, the medals awarded to her grandfather Christopher Daly for his service on the Eastern Front in WWI were returned to Mrs. Kavanagh at a reception in Tulfarris House hosted by Wicklow County Council recently.

Medals awarded to Christopher Daly for his service in WWI – the 1914 Star, the British War Medal and the Victory Medal

The medals were found in a car boot sale in Nottingham by a volunteer of the U.K. homeless men’s charity Canaan Trust.  The Trust, along with the Royal Artillery Association, made contact with Catherine Wright of Wicklow County Council’s Archives Service in January this year. All that was known was the soldier’s name and that he was born in Rathnew, County Wicklow!

The hunt began to track down the descendants of Christopher Daly. The County Archives confirmed the family lived in Rathnew before the war through research in the parish and census records.  However, the invaluable help of Wicklow military historian Brendan Flynn provided the vital clue, that the family moved after the outbreak of war.  Brendan’s research in the Dalys’ war records revealed a correspondence address for Christopher’s mother Ann Daly – the Factory, Blessington.The County Archives then contacted the Blessington Historical Society, enquiring about any Dalys living in the area.  The power of local knowledge is a force to behold!  The Archivist found herself in Vera Kavanagh’s living room looking at photographs of Vera’s grandfather Christopher Daly and his family after the war! 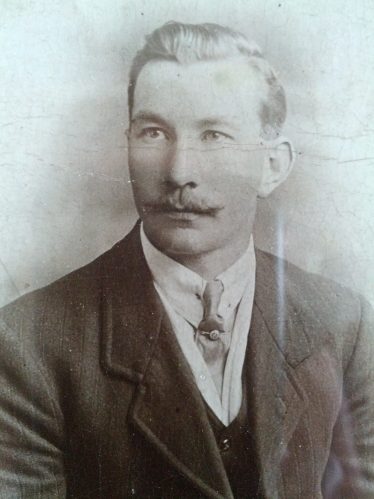 Vera was always very much aware of her family’s military service.  Not only her grandfather Christopher, but three of his brothers – Robert, Peter and John, fought in the war, along with their father Christopher Daly Sr. Tragically, Robert died in a prisoner of war camp in Germany in 1915 and John was discharged in 1917, and hospitalised for the rest of his life as a result of the mental trauma he suffered.

On a happier note, Christopher Daly Jr. married Mary Jane O’Brien after the war and they had ten children, their eldest being Annie Daly – mother of Vera Kavanagh.

Among the guests was Kevin Curtis from the Canaan Trust who formally presented the medals to Vera. According to Kevin “The homeless men who worked so hard on this project are proud to have helped return these homeless medals to the family”. Speaking at the event, County Councillor Jim Ruttle compared the Daly family experience to many in Ireland at that time “Today we heard moving details of Christopher Daly’s experiences, and those of his father and siblings.  It is important to commemorate all Irish men who fought especially in this decade of commemoration.” 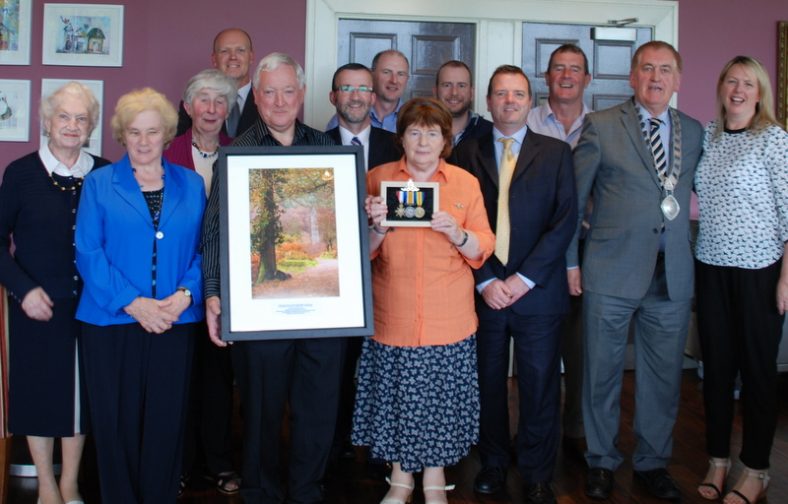