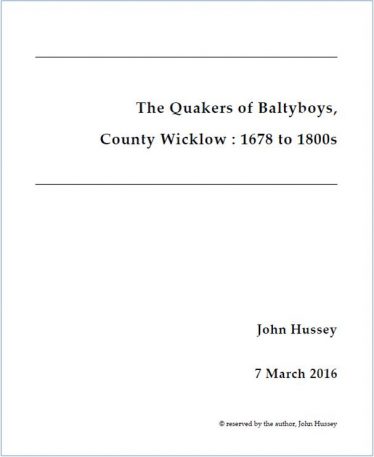 This paper looks at the history of the Quaker community of Baltyboys, which is located in the Kings River valley, about 30 km south-­–south-­–east of Dublin, Ireland. The first Quaker family to seHle there was that of Peter Peisley and his wife Anne Wills, who came in 1678. They were soon followed by the Barkers and by other members of the Wills family. The Quakers settled initially at Baltyboys Upper, which is located centrally
within the Kings River valley, and they acted as local agents for Dublin wool-­– merchants. Early in the 1700s they established a carding, spinning and weaving industry based around the putting-­–out production system. The community spread into the more remote townlands around the valley with individual Quaker families settling at Ballyknockan, Ballynastockan, Carrigacurra, Annacarney, etc. As the industrial revolution progressed, tuck mills and warping mills were constructed. The Quaker community reached its peak numbers around 1750, but in the following two decades it suffered heavily from disownments which depleted numbers and led to migration away from the valley. The United Irish Rebellion of 1798 had a severe
impact on the community. Quaker meetings for worship ceased at this time and most of the community left, with only a few members remaining on during the first decade or so of the 1800s.

This ‘second edition’ has been compiled in March 2016 in the light of additional information that has come to hand since the first edition was published in 2015. In forthcoming studies I will look at other aspects of the Kings River valley, including its weaving industry, wool production, Wicklow’s sheep, the transport of wool to Dublin along the ‘Woolpack Road’ and the wool-­–weaving industry in Dublin.

This publication is made available by the author, free of charge  as an E- Book, click HERE to access

Author details: John Hussey has degrees in Geography and in Civil & Environmental Engineering from Trinity College, Dublin. His research in the area of historical geography has focused on west Wicklow, examining its human settlement and its industry, including its Quaker community and its granite quarrying and weaving industries. Details of John Hussey’s publications are at http://blessington.jimdo.com/ and at  http://wicklowgranitequarries.jimdo.com/author/