You are here: HomenextPlacesnextBRAYnextA Brief Introduction to the Architectural History of Bray

A Brief Introduction to the Architectural History of Bray 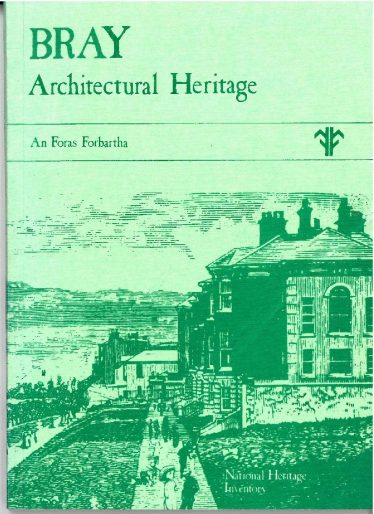 The following is taken from the Introduction to Bray: Architectural Heritage (1980) by William Garner, An Foras Forbartha and Sponsored by The Heritage Trust.

Bray has been a place of importance since the end of the twelfth century when Richard de Clare, Earl of Pembroke, granted the manor, or lordship, of Bray to Walter de Riddlesford in 1173. King John granted Riddlesford an annual fair at Bray and the town appears to have been a worthwhile target for the raids of the O’Tools and O’Byrnes throughout the mediaeval period. There were two castles in bray in late mediaeval times: one at Oldcourt and one sited near Church Lane. Oldcourt castle survives while the Church Lane castle was dismantled in the early eighteenth century and the stones used to build the barracks. Drawings of Bray in the early nineteenth century show Bray to be a small cluster of buildings grouped round St. Paul’s church on the south bank of the Dargle.

In 1841 the population of the town was 3,185 of which 982 lived in Little Bray. The town at this period was described as consisting of “one long street of irregularly built houses, at the head of which are two long streets (Vevay Road and Killarney Road)… The houses in both are generally neatly built, and the town had a cheerful and interesting appearance; it is neither paved nor lighted, but the road is kept in good order”* For many years Bray had been “a favourite summer resort of the wealthier of the Dublin Citizens and of the gentry form a large part of Ireland”** and possessed “in a state of high facility and polish, the various appliances required for their accommodation and comfort.”** in addition Bray had a flour mill and an extensive brewery.

There are few surviving buildings from the period prior to 1850: St. Paul’s Church of Ireland church, St. Peter’s Catholic church, in Little Bray, the former barracks, the Court House, the Martello tower, Erin Cottage, Novara House and the Loreto Convent are the most important examples.

“The year 1854 divided the Bray of old times from the new … Now did Bray cease to be a neighbourhood, and become a rising town”. These words of the anonymous author of A Hundred Years of Bray and its Neighbourhood (1907) sum up succinctly the effect of the coming of the railway to Bray in 1854. With the vast improvement in access from Dublin more people found it possible to live in Bray. And work in Dublin, or to holiday in the town. In these respects Bray ceased to be the preserve of the wealthiest classes.

Willian Dargan, the railways entrepreneur, and John Quin, the owner of Quin’s Hotel, recognised the potential of the town and they initiated its development as a seaside resort on a large scale. They laid out Quinsborough Road just before 1854 and built fine terraces such as Duncairn (formerly Dargan) Terrace, Prince of Wales Terrace and Goldsmith Terrace in the following years. In 1859 Dargan paid for the first effort at constructing the Esplanade which, according to an 1860 guide-book, was “open to everyone chooses to enjoy its delightful expanse”. However, much more work on the Esplanade was required over the next few decades to protect it from the sea and to make it pleasant for visitors. Several schemes were proposed, including one in 1880 by J. Hargrave Bridgford for new concrete sea baths, a pavilion and a musical promenade. In the following year work costing £20,000 was undertaken on a mile of the Esplanade.

The growth of the town in the fifteen years following the arrival of the railway is indicated not only by the development of Quinsborough Road and its terraces, but by the building of two splendid hotels, the Royal Marine and the International, the Methodist Church (1859), the Presbyterian Church (1860), Christ Church (consecrated 1863) and the Turkish Baths (1859). By1860 other residential areas such as Sidmonton Square and Novara Avenue were being developed. In 1857 a Town Commission was established with responsibilities for lighting, water supply, paving and, later, the creation of the Esplanade begun by William Dargan. By 1863 Thom’s Directory could state with confidence:

“Bray possesses natural advantages which, with the improvements that have been effected and are in progress at and around the neighbourhood, show that it is destined to be, as it is rapidly becoming, one of the most attractive places of residence and resort within daily reach of the metropolis, and one of the chief watering places in Ireland.”

The continuous expansion of Bray through the late nineteenth and early twentieth centuries is in contrast to the majority of Irish towns which had ceased to grow by the end of the nineteenth century. To emphasise the town’s prosperity suitably grand Town Hall was built. The most important building of the last quarter of the nineteenth century in Bray, it was designed in 1881 by T. N. Deane and Sons and paid for by Lord and Lady Brabazon. It forms a fitting celebration of the town’s prosperity and is a delightful civic ornament.

The twentieth century has not been kind to Bray. Both the Royal Marine Hotel and The International Hotel, which were at the east end of Quinsborough Road, were burnt. Sir John Benson’s Turkish Baths, which went through many vicissitudes, were demolished in 1980. They where the last surviving example of Turkish baths architecture in Ireland and provided an exotic element in the townscape of Bray. The 1920’s and 1930’s saw the building of numerous orange-tiled bungalows which appear to be peculiar to east coast resorts. They are of little architectural distinction but they add colour to suburban Bray. Since 1960 the town has doubled in size, although the extent of the growth has been obscured by the pleasant wooded environs.

Although the architecture of the Mail Street was never distinguished, the inappropriate use of plastic on the shopfront has destroyed what little there was. The scarcity of interesting shopfronts is noticeable in the list. Despite the number of public houses, amusements arcades and souvenir shops, the sea-front managed to retain a certain Victorian dignity. Special mention should be made of the colourful and vigorous fair-ground signwirting on Dawson’s Amusements.

This book was published in 1980 and as such some of the information presented in it may no longer be accurate.

**The Parliamentary Gazetteer of Ireland, 1846