You are here: HomenextPlacesnextBRAYnextBray Town Hall

The Bray town hall was designed by Thomas Newenham Deane and Son and was erected in 1882. The hall is seen as an important example of “quaint” old English style architecture popularized in England in the 1870’s. It was designed as a town hall and covered market, though the market has been largely filled in. The standard of craftsmanship present is remarkably high and the building is carefully placed at the junction of three important thoroughfares (Killarney Road, Vevay Road and Main Street). The plaque at the entrance to the building, dedicated to Reginals Brabazon who commissioned the construction of the hall, reads:

“This Town Hall and Market house was erected by Reginald Lord Brabazon, son of William 11th Earl of Meath and Mary Lady Brabazon only daughter of Thomas 11th Earl of Lauderdale in the year of our Lord 1882” 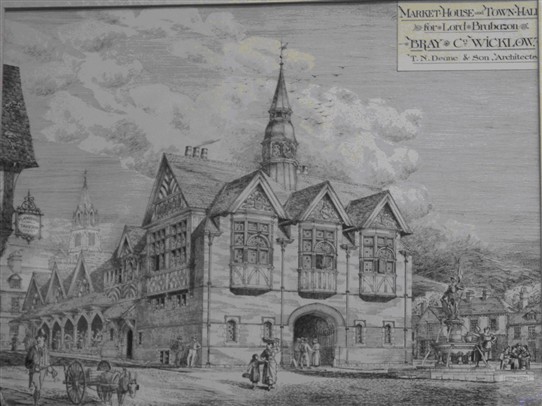 The building is a three bay, two storey redbrick with a central carriage arch on the main facade. The arch contains an elaborate wrought-iron gate dating to 1881, flanked by pairs of small barred windows. The main facade facing down Main Street has tall narrow proportions; the side elevations are elongated.

The first floor of the building contains the council chamber. The importance of the first floor can is emphasised by the three large oriels with black and white painted half-timbering on the aprons; transom and mullioned windows each incorporating a large arch (known as Ipswich Windows); and crowned with pargetted coats of arms framed by gables. At each end of the council chamber, on the return facades, are very large transom and mullion windows. The chamber is surmounted by a high-pitched red tile roof, a lantern and spire.

The side elevations which were once largely open on the ground floor, have slanted canopies supported by timber brackets. On the first floor there are wide windows in half-timbered gables. There rere elevation is similarly treated. The main entrance, on the east side of the building, has its own separate canopy over a gothic doorcase which leads immediately to a steep store staircase. Over the entrance is a small Ipswich window under a gable. In corresponding position on the west side is a pointed arch over which is an oriel window with a steep-pitched roof.

In the south porch a battered mock Tudor inscription survives:

“In all your dealings be ye just and true
Who traffic here beware no strife ensue
Let [justice] strictly in the scale be weighed
So shall ye call God’s blessing on your trade.” 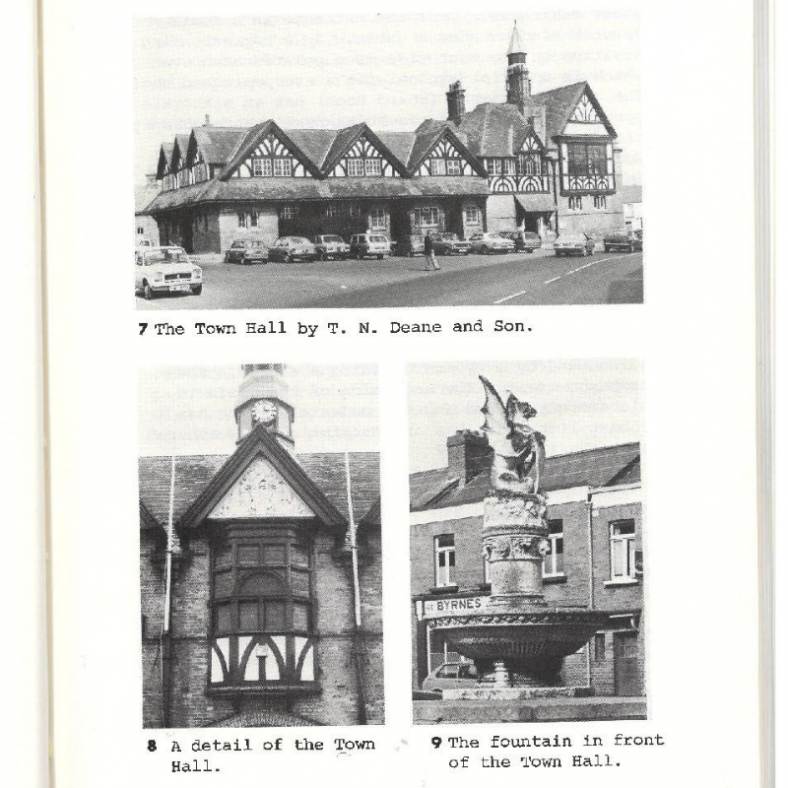 Directly in front of the main entrance to the Town Hall and facing down Main Street is a monument surmounted by a wyvern holding a shield with the Brabazon crest on it. The underside of the basin is elaborately carved and the pedestal, which has robust lion heads, has in inscription so weathered it has become illegible. 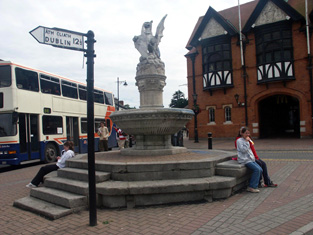 As with many of the buildings along the Main Street, the Town Hall has been altered and many of it’s distinguishing architectural features are no longer easily noticeable. Due to the buildings conversion into a fast food restaurant in 1997 the interior architecture of the building has been greatly and detrimentally altered. Thought the alterations that have been made are luckily impermanent they have still taken away from what was once a beautiful example of old English style architecture and have replaced it with generic and commercialized features. 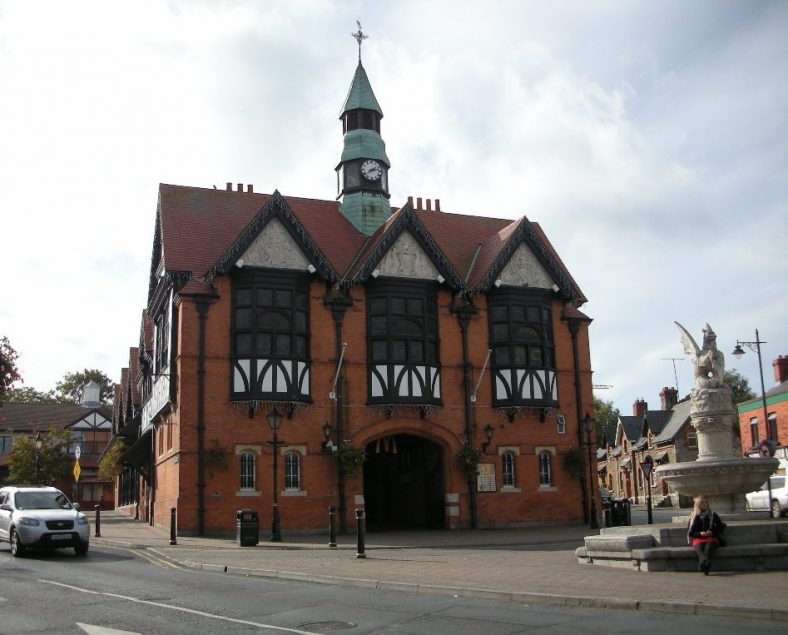 Our Wicklow Heritage: The Concept and Design of Bray Town Hall (http://www.countywicklowheritage.org/page/the_concept_and_design_of_bray_town_hall)