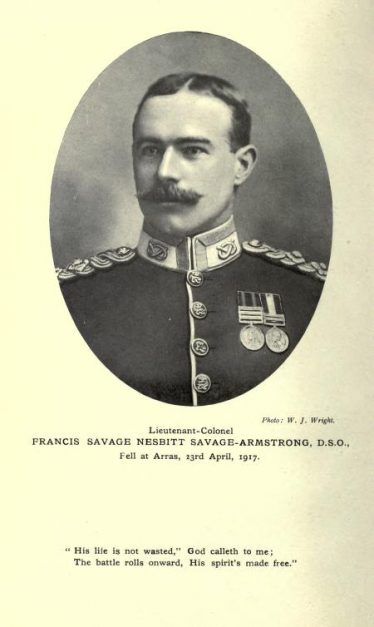 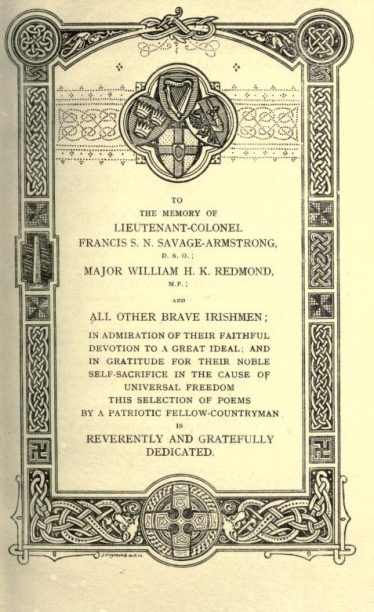 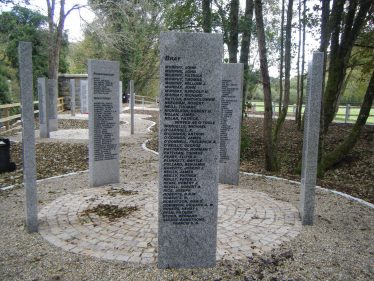 Lieutenant-Colonel Francis Savage Nesbitt Savage-Armstrong was born in Dublin in July 1880, the elder son of George Francis Savage-Armstrong (1845-1906), academic and ‘poet of Wicklow’ and his wife, Marie nee Wrixon. During the 1880s the family moved to Bray, where they lived at Beech Hurst on Killarney Road. Francis, his brother, Raymond, and sister, Guendolen, grew up in the area, and in one of his poems their father bequeathed to the boys his own lifelong love of the Wicklow landscape of ‘purple peaks’, ‘mountain-pines’ and ‘showery sea.’

Francis was educated at Shrewsbury School, where his academic record was undistinguished, apart from an impressive mastery of ‘out of the way points of antiquarian knowledge.’ Apparently something of a school character, he was remembered as ‘fearless, modest, humorous, ingenious [and] affectionate’, and for his original turn of phrase. With his sights set on a military career, he served with the South Staffordshire Regiment in South Africa during the Boer War, where he quickly achieved distinction when the death of his commanding officer forced him to assume command of his company in action.

In the tranquil years before the outbreak of World War I, Francis had leisure to resume the antiquarian interests which he had pursued as a schoolboy, and in 1913 was one of the leaders of the team which excavated the site of an important Roman settlement at Wall in Staffordshire (now the Letocetum Roman Baths Site and Museum). But in summer 1914 these scholarly distractions were brought to an abrupt end, and on 1 November 1914 Captain Savage-Armstrong left for France to join his regiment, which had already suffered extremely heavy casualties. He fought at the first Battle of Ypres, and at Neuve-Chapelle, Fromelles and Festubert, where he was wounded in 1915, and invalided home. In May 1916, having been awarded the DSO and now with the rank of Major, he returned to France, and was transferred to the command of a battalion of the Royal Warwickshire Regiment. He was killed on 23 April 1917, aged 36, while leading his men in action during the Battle of Arras, and was buried at Point-du-Jour MilitaryCemetery, Athies, in the Pas de Calais. His name is one of those recorded on the Bray section of the Wicklow WW1 memorial at Woodenbridge, inaugurated in September 2014.

Later in 1917 a selection of George Francis Savage-Armstrong’s poems was published, dedicated to the memory of Francis, to that of another recently-dead Irishman with Wicklow connections, Major Willie Redmond MP, killed at Messines on 7 June 1917, ‘and to all other brave Irishmen.’ Profits of the first edition were devoted to the Irish Counties’ War Hospital at Glasnevin, while those of the second, published in October 1919, were intended to go towards the provision of a National Memorial to the Irishmen who fought and died in the war.

The two younger Savage-Armstrong siblings also saw service during the war. Raymond, a Captain in the Leinster Regiment, was wounded at Ypres in 1915, was later stationed for a time in Ireland, and resigned from the army after the war with the rank of Major. Guendolen, worked as a nurse in the Richmond Hospital during the war, and afterwards in various forms of voluntary social work, including Miss Sandes Soldiers’ Home in Derry.  Both lived out their lives in Northern Ireland, but apparently retained an affection for Wicklow – in what is now virtually the only reminder of the family’s connection with the area, Bray Library holds a number of volumes of the works of George Francis Savage-Armstrong, presented in 1952 by Major and Miss Savage-Armstrong.

[George Francis Savage-Armstrong’s role as ‘poet of Wicklow’ and the family’s links with Wicklow and with the Ards Peninsula will be discussed by Rosemary Raughter (Greystones Archaeological & Historical Society) and Down local historian, Mark Thompson, in ‘Stories of Wicklow, Ballads of Down’, 4-5pm, on Friday, 26 September 2014, as part of the Festival of History/WW1 Roadshow to be held in Charlesland Golf and Country Club, Greystones, 26-28 September. For further information on this event, see http://www.countywicklowheritage.org/page/festival_of_history_-_tickets_now_available ]