You are here: HomenextPlacesnextBRAYnextSt. Paul's Church 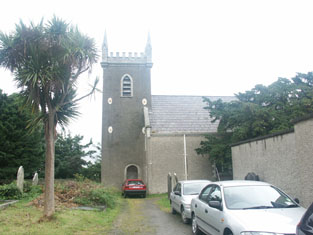 St. Paul’s church was built in 1609 and is Bray’s oldest building. The church was built on an elevation situated on the south shore of the Dargle River. Ecclesiastic orientation has dictated that the building faces away from the main street. The town of Bray slowly grew as a small cluster of buildings situated around the church.

The graveyard appears to first have been put into use soon after the churches foundation in 1697. Among those interred in the graveyard around this time where several members of the Odacio Formica family of glassmakers. The first vaults within the church were allocated in 1702 to the Corker, Westenra and Tillson families. The graveyard was used by the military serving in the nearby Royal Barracks (the single surviving exterior memorial commemorates the Royal North British Fusiliers killed in 1803) and would also appear to have provided space for those on the parish poor list. Burials ceased in St Paul’s circa 1860.

Renovations and additions have been made throughout the years including the addition of the tower to the front circa 1700 and an extension to the east end in 1869. The church as we know it today is largely of 1911 rebuilding by Orpen and Dickinson of the First Fruits church of 1818.

The building is roughly rectangular in plan, but is broader to the east end, where there are various gabled (former) transept, chancel and vestry extensions. The façade is finished in unpainted roughcast with granite dressings to many of the openings, with the former chancel and vestry section in rock-faced semi-coursed granite with granite reducing buttresses. The pitched roof is slated and has granite parapets, many with kneelers and finials, whilst the tower has a crenellated parapet to the tower with tall corner pinnacles. There is a tall granite and roughcast chimneystack to the north side of the roof.

The entrance is to the south face of the tower and consists of a semi-circular headed opening with timber double door. The windows are of various sizes and shapes, some pointed arch, some semi-circular headed and some flat-headed and are filled with a variety of timber, timber and leaded frames with other, overtly gothic, windows filled with granite or sandstone tracery and leaded glass. Cast-iron rainwater goods. The building is located on raised ground to the side of a road and is surrounded by a graveyard. Internally the former nave has plastered and painted walls and exposed timber arched brace roof trusses. An arcade separates the former south transept from the former nave.

Against the south wall of the church is a tombstone carved to Mr. Benjamin Ball of the City of Dublin, Master Builder, who died 27th of November 1744.

The interior of the church has a hammer-beam roof with angles carved on the beams. The wood carving in the church is similar in style and quality to that in Christchurch. The interior has been stripped of all ‘ecclesiastical’ fittings.