You are here: HomenextPlacesnextBRAYnextThe Brandy Hole

In Ireland smuggling is most commonly associated with the eighteenth century. Smuggling was, of course, not a new occurrence in Ireland but the growing consumption of commodities such as tea and tobacco lead to a growth in smuggling during this period of Irish history. It became so rampant during this century that it constituted a small, but significant, portion of foreign trade. Brandy, tea, gin, silks and wine were what where most often smuggled in from France.

The coasts of Wicklow provided a great location for smuggling. Under the cover of night smugglers would send their contraband ashore in small boats to pre-determined locations along the coast. They would then continue on to Dublin with their legitimate goods there by fooling the Revenue office. Despite the Governments efforts these smuggling operations where barley interrupted, and at most where only delayed. 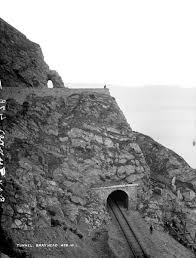 Previous Location of “The Brandy Hole”

The geography of the Bray Head coastline lent itself to these smuggling efforts. The most well known of these concealment locations is “The Brandy Hole”, likely named due to the smuggling of brandy into this location. This concealment was located a half mile along the shoreline from where the road crosses the railway on the head, just beyond Lord Meath’s lodge.

“The Brandy Hole” consisted of a large cavern with its entrance opening to the sea, with many passages leading far in under the hill. The size and shape of the cavern left ample accommodation for the smugglers cargo. Boats guided by lanterns light where easily able to make their way into the cavern to leave their contraband in a high and dry location within.

A shaft sunk into the earth, connected to a subterranean chamber which acted as a sort of second storey to the first one, went unseen from the surface and made for a concealed entrance to the cavern below. These smuggling cavers where destroyed with the introduction of the railway in the 1850s. Despite this destruction over 150 years ago, the cliff area is still often referred to as “The Brandy Hole”.

Proceedings of the Royal Irish Academy: The Smuggling Trade in Ireland in the Eighteenth Century by Cullen, L. M. (https://www.jstor.org/stable/25505149)