The Bray Head Hotel boasts a famous film history, having had such movies as The Commitments, Breakfast on Pluto and My Left foot filmed within its walls. The hotel was built in the 1860s, during Brays boom in tourism along the seafront. The building was later extended in the late nineteenth and early twentieth century’s. Bray Head Hotel is a large mid-nineteenth-century building of three storeys with rendered painted walls, a mansard roof and verandas over the ground and first floors. 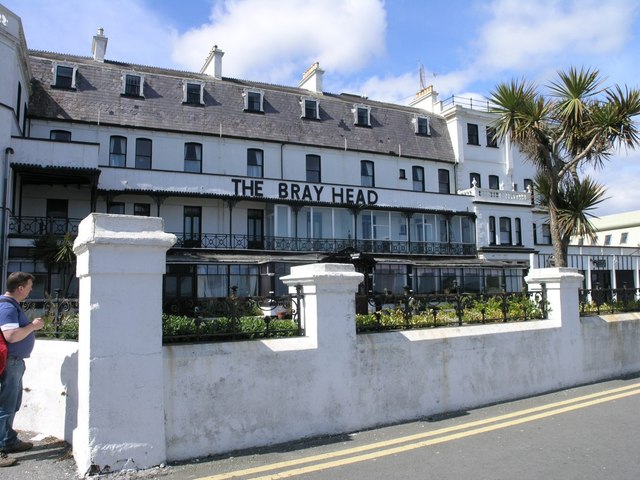 The building is finished in render with moulded quoins and decorative balustraded parapet. The central section is three-storey with mansard roof and gabled dormer windows. To the south side is a large three-storey projecting bay while to the north is a large four-storey projecting squared bay which in turn has a two-storey projecting squared bay. The ground floor of the central and northern sections are enclosed with a replacement porch / conservatory. To first floor of the central and northern sections is a balcony with decorative wrought-iron guardrail directly above the porch; to the central section there is a further balcony at second floor and this has a plain guard rail on which the hotel name is painted. The windows are flat-headed and segmental arch headed with generally one over one timber sash frames. The mansard roof is slated with mainly cast-iron rainwater goods; roofs to the north and south sections are flat. Chimneystacks are rendered with corbelled caps and clay pots. The hotel is situated at the far south end of the sea front and is set behind a rendered wall with decorative wrought-iron railings.

The building originally hosted 80 guest rooms but that number has since been reduced to 60, 48 of which are now en-suit. The building remained a functional hotel until 2017 when it was sold. The building has remained dilapidated and unused since.

Although the building has gone through a few alterations over the years it still maintains much of its late Victorian grandeur. The building sits at the end of the esplanade and makes for a fitting end to the largely nineteenth century seafront.