You are here: HomenextPlacesnextBRAYnextThe Concept and Design of Bray Town Hall

The Concept and Design of Bray Town Hall 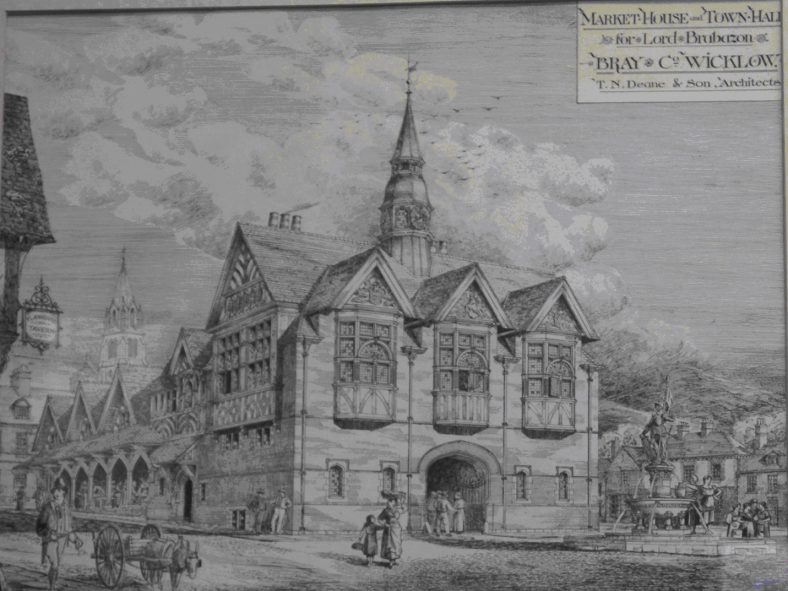 The above illustration is of the architects’ visual concept for the Bray Market House and Town Hall as envisaged in 1879.  The drawing is in the possession of Bray Public Library and a photographic copy, smaller in scale, is now displayed in the Heritage Centre Museum.  The drawing tells us a great deal about the concept and design of the building and, indeed, reflects the tastes, aspirations and directions of the principals responsible for erecting the Town hall – Reginald, Lord Brabazon, son of the 11th Earl of Meath, and Mary, Lady Brabazon, his altruistic wife and only daughter of Thomas Maitland, 11th Earl of Lauderdale.

Various records give the lead-up to the eventual opening of the building in 1884.  In particular, the minutes of Bray Township Commissioners for the period 1879 to 1885 are revealing; these minutes are bound in leather volumes and form part of the archives of Bray Urban District Council.  The Commissioners were established under the Bray Township Act, 1866, and the board members, comprised of prominent citizens and businessmen, met fortnightly, and sometimes weekly, in the old courthouse to administer the affairs of a growing town and resort.  They were preoccupied mainly with the annual rates, harbour, seafront wall, bathing-boxes, licensing cab-drivers, paving streets, water-supply and lighting.  The board members, varying in number from 12 to 16, employed a small municipal staff – town clerk or secretary, engineer or surveyor, solicitor, various inspectors and outdoor workers.

In a letter to the Commissioners, dated 22nd August, 1879, Lord Brabazon announced a wish to erect at his own expense a covered market in upper Bray at a cost not exceeding £4,000.  The Commissioners were delighted with the news and instructed town officials to meet and discuss the structure and site with the Meath agent and architect.  In subsequent deliberations, the commissioners sought to extend their powers and the boundaries of the township.  Two separate delegations were despatched to London to promote their case in an amendment to the 1866 Act.

The Earl of Meath became concerned over the Commissioners’ claims in the proposed Bill and in a letter dated 10th April 1881 written from Sorrento in Italy, Lord Brabazon warned that the Town Hall would not be built if the Commissioners did not agree to his father’s conditions.  he wrote:
The following are the conditions upon which the Earl of Meath willgive his sanction to the erection of a market house in upper Bray and upon which Lord Brabazon will undertake the erection of same:

Negotiations were conducted and the Commissioners withdrew some of the claims seen by the Earl of Meath as a threat to his proprietorial rights.  The rent figure was increased to £90 at Lord Brabazon’s suggestion; he offered to make a free present of an ornamental lodge in the People’s Park – it would contain a parlour, kitchen, scullery, three bedrooms, outhouses and gardens.

In May 1883 it was announced that the market house and the gardener’s lodge were nearing completion.  Lord Brabazon nominated the employment of one, Alfred Baily, son-in-law of Lord meath’s coachman, as caretaker of the market house and town hall.  Baily became caretaker on 23rd July, 1883 and one condition of his service was that he would be responsible for the books in a public library in the building.  Lord Brabazon also urged the Commissioners to appoint a competent gardener with a ‘tidy wife’ to occupy the lodge in the People’s Park.

A further dispute arose between Lord Brabazon and the Commissioners on the drafting of the lease.  He wanted a clause in the deed reserving the use of the large hall (boardroom) on six days in a year.  He also specified that no meetings were to be held within the building at any time ‘for strictly political or religious controversial purposes’.  Finally the Commissioners gave their seal to a lease in April 1884, and on 19th May held their first meeting in the new Town Hall.  One of the first measures was to insure the building for a round figure of £6,200.

Four months later, when Lord Brabazon had paid the bills, he advised the Commissioners that the cost had exceeded the original estimate of £4,000.  He gave the following summary:

The Brabazons gave the task of designing to the leading architects of the day in Ireland, Thomas Newenham Deane and Son.  Deane, a son of Sir Thomas Deane, the noted Cork architect, becamse head of the family firm in 1871.  The National Library and the National Museum in Kildare Street, Dublin, constitute his best-known work; at the opening of the twin buildings in 1890 he also was knighted.  He did much valuable work to protect national monuments.

The design of the Town Hall and Market House is essentially the handiwork of Edward Guy Dawber, a young assistant in Deane’s office.  Born at King’s Lynn in Norfolk in August, 1861, Dawber was educated at the local grammar school and articled to a local architect, William Adams.  There he studied the ‘Quaint’ old English-style architecture popularised by R. Norman Shaw and W. E. Nesfield in the 1870s.  Dawber migrated to Dublin and together with Deane’s son, Thomas Manly Deane, worked on the design for Bray.  The drawing of the building is entirely Dawber’s; T. M. Deane’s contribution to the actual drawing was the pargetted coats of arms of the Brabazon, Pembroke and lauderdale families, and the fountain and its figure of an armoured knight.  This element was changed and in its place the Brabazons chose a wyvern as a more fitting armorial symbol.  Dawber returned home in 1881 and became a highly successful practitioner.  He was president of the Royal Institute of Architects, was knighted in 1936 and became renowned for his devotion to preserving rural Englian.  In this field his interest may have been influenced by T. Newenham Deane.

Features of the Building

William Garner, the architectural historian, speaks highly of the design and workmanship of the Town Hall.  In his invaluable inventory of Bray architecture, he describes the building as being supremely picturesque.

The main facade, facing down the Main Street, has tall narrow proportions; the side elevations are elongated.  the facade is of three bays and two storeys, built of red brick with a central carriage arch containing elaborate wrought-iron gates, dated 1881.  Garner refers to the importance of the first floor emphasised by three large oriels with black and white painted half-timbering on the aprons; transom and mullioned windows each incorporating a large arch (known as ‘Ipswich Windows’) and crowned by pargetted coats of arms framed by gables.  These windows are based on the windows of Sparrowe’s House in Ipswich, built circa 1670.

At each end of the council chamber, on the return facades, are very large transom and mullion windows.  The chamber is surmounted by a high-pitched red tile roof, a lantern clock tower and a spire.  The side elevations, which once were largely open on the ground floor – for market stalls – have slated canopies supported by timber brakcets.  On the first floor are wide windows in half-timbered gables.  The rere elevation is similarly treated.  The main entrance, on the east side, has its own separate canopy over a gothic doorcase which leads to a stone staircase.  Over the entrance is a small Ipswich window under a gable.  In a corresponding position on the west side is an oriel window with a steep-pitched roof.

The council chamber has an elaborate open timber roof and two tudor-renaissance oak chimney pieces containing carved panels representing Literature, Justice, Commerce and Agriculture.  They were carved in 1882-83 by a London craftsman, T. Reynolds.  Another feature of the chamber are the 30 stained-glass panels displaying the arms of the Brabazons and their wives, dating from Norman times to the 19th century.

One must pay due respect to the foresight of the Brabazons, Reginald and Mary.  They were concerned to provide an architectural gem to serve as the hub of the municipal and commerciallife of the town.  It stands to their memory.

In another part of the building an inscribed plaque carries this exhortation:

In all your dealings be just and true

Let conscience strictly in the scale be weighed

So shall ye call God’s blessing on your trade.