The International Hotel was one of Bray’s best-known landmarks from its establishment in 1862 until its demise in 1974.  The arrival of the railway in 1854 was the trigger for intense development of Bray and facilitated its growth as a seaside resort and a city suburb. By the beginning of the twentieth century Bray was firmly established as the leading fashionable resort in the country. The hotel was undoubtedly at its prime in these early years. 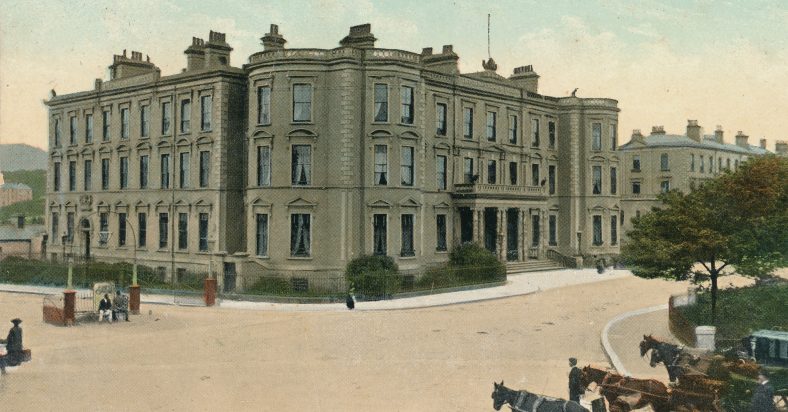 It had many different uses during its lifetime, from a thriving hotel in the early years to its use during World War I as the Princess Patricia Hospital. Then, from 1936-’39, it became the Friendship Holiday Association Home, and later during World War II it was used as an army base. Bray as a tourist resort declined in the post-war period and, during these years, the enormous International hotel lay idle as filling its rooms was no longer possible.

The Men Behind the Hotel

The role of William Dargan in Bray’s development was tremendous. It was Dargan who had been responsible for bringing the railway to the town, and his vision is evident in the planning of the whole Quinsborough Road area.  It was at the eastern end of this road, close to the sea, that the International Hotel would be built. Some associates of Dargan’s were Edward Breslin, a leading businessman and friend, and owner of the Royal Marine Hotel, John Quin of Quin’s Hotel (who owned most of the land in that area) and John Brennan (builder). 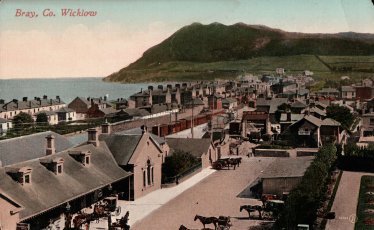 Only one lease of 25 October, 1860 between John Quin and William Dargan exists (in the Quin papers):“It relates to the site of the International Hotel which Dargan acquired for an annual rent of £50 sterling. ….. The term of the lease was for 900 years.  Dargan agreed to build within two years a ‘private dwellinghouse or houses, or an hotel or both, fronting on to Quinsborough Road’ .”

John Brennan, having made his fortune in America, returned to invest it in his hometown, Bray.  The new hotel was to be built by him on William Dargan’s site at a cost of £30,000.   It took eighteen months to complete with the assistance of a labour force of some hundred artisans and labourers. It formed a majestic conclusion to the impressive terraces newly erected on each side of the road. This was the setting for the last of the grand buildings to be established on Quinsborough Road, the largest hotel in Ireland at the time – the International Hotel.  The first stone had been laid on 18 February 1861 and the hotel opened on 31 May 1862 to coincide with the opening of the International Exhibition in London, after which it was named.

Description of the International

The hotel was truly on a grand scale. Three stories over basement it contained about 250 apartments, 212 of which were bedrooms, and it was estimated that it could accommodate between 300 and 400 people. Although there were no public mains, each storey was furnished with bathrooms and water-closets and all the rooms had an abundance of light.    Its great bonus was that it was just across the road from the railway station, and the intention was to make it a first class establishment in every way, conducted somewhat after the continental system.

By this time Bray had begun to describe itself as ‘the Gateway to the Garden of Ireland’.  However, hopes of a sustained tourism were never realised.  The International changed proprietors at least three times in the 1860s, and once as a vacant premises rather than as a going concern.

Bray as a Tourism Centre 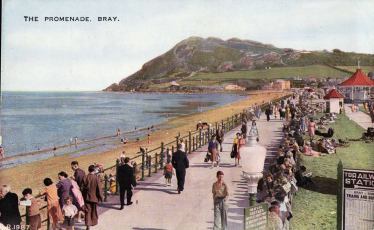 The development strategy in Bray to create the ‘Brighton of Ireland’ was a tremendous success in the early decades.  No figures are available for the number of visitors who came to the town in these years but it is clear they were significant:  hotels and guesthouses flourished and multiplied and large numbers of day trippers swelled the ranks of the longer-term visitors on week-ends and public holidays.  Among distinguished visitors to the town were various members of the royal family including the Prince and Princess of Wales in 1868, Prime-Minister Gladstone in 1877, the Queen of Romania in 1890, various English Lords Mayor and successive Lords Lieutenant. But by the late ‘70s the hotel was in difficulties, and a notice to sell in the Land Courts followed. 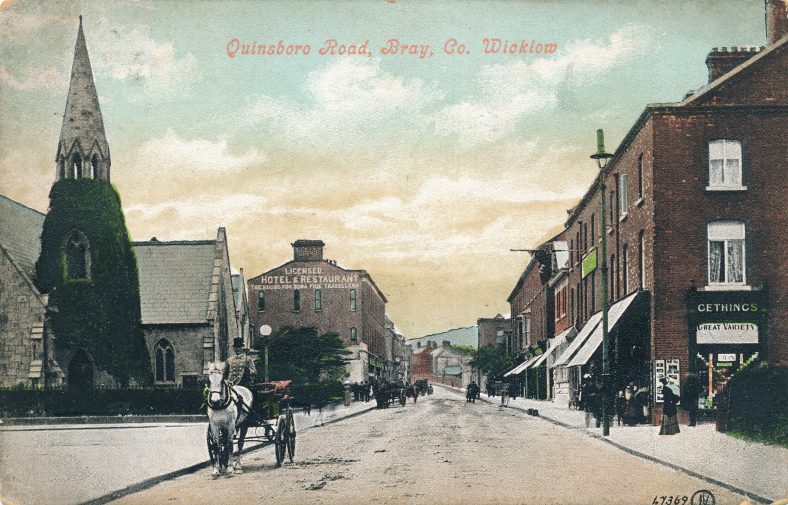 In the years that followed, the population of Bray rose and further development occurred.  However, there was little or no renewal and Bray did not continued to evolve as a holiday resort. In 1900, the International was purchased by the Bethell Hotels Company who also controlled the Bray Head hotel and the Marine Station Hotel.  However, the International’s role as a hotel came to an end, albeit a temporary one, with the outbreak of the 1914-18 war, and it would not reopen as a hotel for another thirty years. 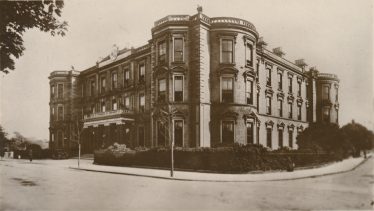 The Great War, with the social revolution that accompanied it, was to mark a watershed in the town’s development and to bring to an end its Brighton of Ireland image.       The hotel was to undergo a change for the next few years.  The huge Allied casualty rate on the Western Front resulted in hospitals throughout the British Isles being filled to capacity.  So to ease the pressure, the War Department took over hotels and used them as temporary hospitals where servicemen could recover from their wounds.  The British Red Cross and the St. John’s Ambulance Association leased the International Hotel in early 1915.  A generous share of the huge cost of equipping the hospital was contributed by the people of Bray.  It was opened in July 1915 under the name “The Princess Patricia Hospital for Wounded Soldiers”, named  with the consent of Her Royal Highness the Princess Patricia of Connaught. It contained over 200 beds.  Initially it was used for the fitting of artificial limbs and for any convalescent cases from the Dublin hospitals.  Later on it was used for more general war-wounded.

The owner, Frank Bethell, resumed possession when the Princess Patricia Hospital was closed in 1919 but the end of the war did not see the International Hotel returning to normal business as it failed to re-open.  The entire furnishings of the hotel were advertised for sale by auction on 14th February 1921 and the hotel remained vacant from 1922-1935.

In the 1920s Bray needed to regain some of its old ambience as a seaside resort.  This would prove difficult.  On exiting the railway station, visitors to Bray were met with the sight of the neglected International Hotel with overgrown gardens and the derelict Marine Station hotel.  This situation continued through the 1920s and until the mid 1930s.  In 1934, the A.P. Friendship Holidays’ Association, London, was to take over the International Hotel, Bray and it did, in fact, run the hotel for the years 1935-39.

Bray, like the remainder of the country, did not escape the hardship and deprivation of the years of the Second World War.  During the war, Bray was a garrison town with the Fifth Battalion of the regular army based in the International Hotel.

By 1946 the war was over and the country was making efforts to return to normality.  In Bray the International Hotel was once again for sale and consequently fell under the management of Mr. J.W. Oppermann, reopening in 1947.  Only three years later, in 1950, an attempt was again made to sell, this time as a going concern.  The hotel was advertised for auction, on 19th July, 1950 at the premises, fully furnished and equipped.  However, the sale was not successful.

In 1961 the hotel finally sold and it became a subsidiary of the Abbey Group Ltd.  It was reopened once again on 2nd June 1962 following extensive renovation and refurbishment but by February 1964 was back on the market.  Again, it did not sell, and was withdrawn at £90,000.

The End of the International Hotel

Early on June 14th, 1974, fire broke out in the International and the guests that were resident there all managed to escape.  The whole building was ablaze within a few hours and left the hotel entirely burnt out.  The International site was to lie derelict for nearly twenty years.  The beautiful building was not destined to be part of our heritage as it was destroyed in the fire of 1974 and then deemed unsafe, and later demolished.  Bray Urban District Council received a planning application from the developer Sean Nolan for the construction of two apartment blocks on the site in 1980.   However, this did not go ahead.   Finally, in 1990, Bray Leisure Bowl was constructed.

Adapted from a research paper by Helen Wheatley