The PURE Mile in Ballycoog is a stretch of road from the entrance to Ballycoog Wood to the crossroads in the village. This was on account of its outstanding scenic beauty, the beautifully diverse hedgerow and the historic nature of the built environment. 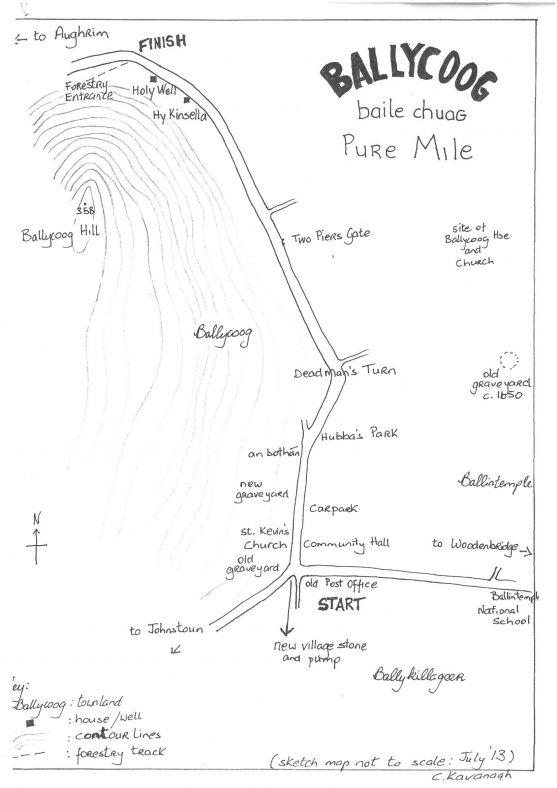 According to Liam Price (1945) in ‘Placenames of County Wicklow’ the name Cuag was the name of the grandson of Gabhal Siomon, one of the prominent families of the O’Byrnes and hence the name Ballycoog. The crossroads marks the intersection of the townlands of Ballykillageer (giolla gear – a short lad), Ballintemple (place of the temple) and Ballycoog.

At the crossroads is St. Kevin’s Catholic Church built in 1816. It is situated in the townland of Ballykillageer on a height overlooking Woodenbridge. Originally it was part of Arklow parish but in 1882 was annexed to Avoca. The church contains a carved oak altarpiece as well as some beautiful statues. People walked miles across the hills along Mass Paths to this church to fulfil their religious duties. Prior to this building there was a church sited in the townland of Ballintemple. The gable of this ruin still stands and can be glimpsed in the field below the road where the oldest graveyard in the area dates back to 1650. 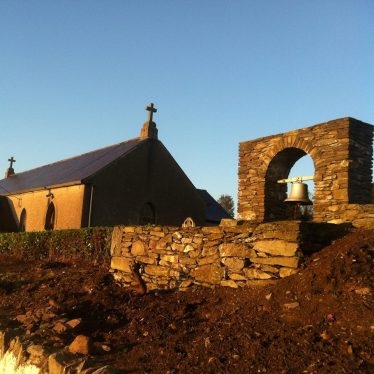 At the crossroads the first grave in the old graveyard is dated 1838 and in 1935 the remains of Pat Doyle of Moneyteigue was the first burial in the new graveyard. 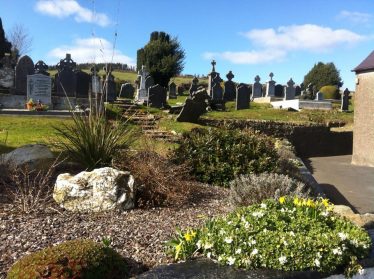 Opposite the church is the community hall. This was originally the National School built in 1887 on a rented site on the townland of Ballintemple. It was built to replace a two story building on the church grounds opposite which is now the church car park. The present school further down the hill in the direction of Woodenbridge was built in 1968 on a site donated by Susie O’Callaghan (nee Grant). Although the school is called Ballintemple National School it is in the townland of Ballykillageer having retained its name from the former school site at the crossroads. 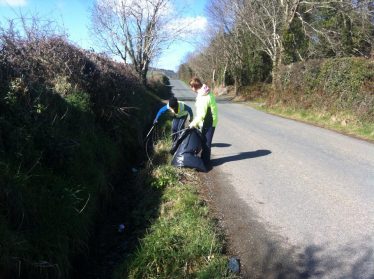 The cottage at the crossroads surrounded by a white wall was the original Post Office in Ballycoog.The Post Office service began in 1890 and was run by Miss Byrne of Ballycreen. She also had a small shop there. It is said that Sadie Byrne, a cousin of Miss Byrne used to prepare the church and have everything ready for the priest for Sunday Mass. One night when she was in the church there was a coffin there. At the time she had a hurricane lamp and when she held up the lamp to look down the church the man from the coffin was standing at the door. She seemingly told this story herself and as she was used to being in the church she was not too afraid!!!

The new Ballycoog stone was erected and landscaped in 2012. The village pump has been reinstated at the crossroads where it stood as far back as people remember. 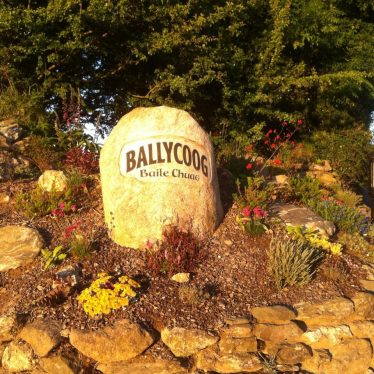 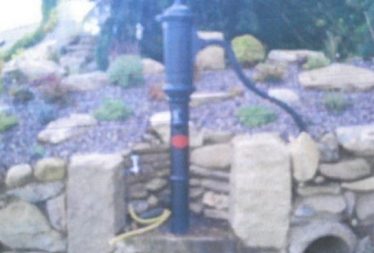 Between the 1920’s and 1980’s there were at various times individual shops in Ballycoog. One such shop was ‘Bothán’ or the ‘hut’ which was a small shed. The modern house on the site of the original hut recalls the name. During the war years locals gathered there to tell yarns and play cards. Later a local woman, Nin Byrne, ran a shop in the old two storey school and stables on the site where the church car park is now.

‘Hubba’s Park’ was named in remembrance of Ronan McDaid who died tragically in 2006.

Following on the road the bend is known as the ‘Dead Man’s Turn’. The story goes that someone was killed here once and is believed to be haunted.

Travelling on we see a large two storey house built in the 1700’s and extended some time later.

A short distance further along the road is ‘Two Piers Gate’. This was the way into Ballycoog House.

The House on the bend now called ‘Hy Kinsella’ was built as a farm workers’ house on the Ballycoog House farm.

Beside Hy Kinsella is an old well known locally as the ‘Tober’ which has recently been cleared. The mile ends at the entrance to Ballycoog Wood.

‘Tober Field’ always had a well or drinking area for the cattle. ‘Spuddy Field’ was where potatoes were grown. ‘Ned Brien’s’ is a field whose former owner was Ned Brien. ‘The Mass Path Field’ and ‘The Church Field’ are both associated with the old church of Ballintemple. The gable of the old church is to be seen in the field. The reason for the name ‘Piccadilly’ was lost when the land changed ownership although this is the known name of this field for generations. ‘The Bank’, ‘Hill Field’, ‘The Square’, and ‘Three Corner Field’ take their names from the topography. 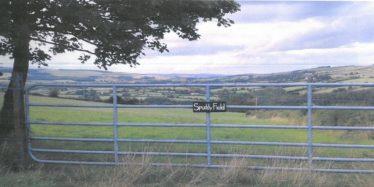 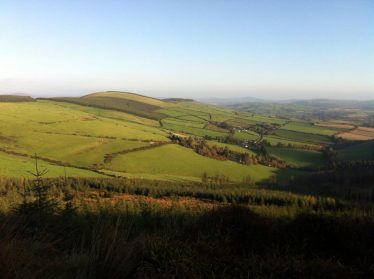 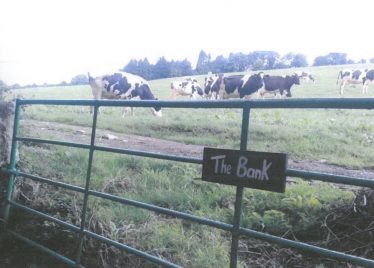 Leaving the Village on the country road the hedgerow presents with different wild flowers depending on the season. In spring there are firstly celandines followed by banks of primroses and tiny violets. The scent of wild garlic can be appreciated as its delicate white flower intermingles with bluebell. Herb Robert, Lady’s Smock and Cuckoo’s flower grow alongside St. John’s Wort. The holly, ivy, different types of ferns and purple fetches mix with the dandelion and daisy. In the summer the cow parsley and foxglove clothe the banks with the mare’s tails and hog weed. The red of the tiny wild strawberries and fuchsia compliments the honeysuckle which has its own sweet fragrance. Autumn produces its harvest of fruit – the dog rose produce its hips, the hawthorn its sloes and the lush blackberry. In winter the holly and the ivy display their fruit and the hedgerow dies back as it waits for spring.

As a result of the Red Kite Project, red kites are breeding and can be seen in flight as you walk along the road. Their distinctive high pitched call can be heard. Seen is their deep reddish brown body and inner wings which contrast with the black and white wing tips and whitish-grey head. 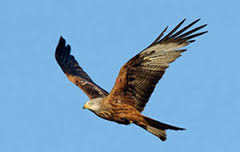 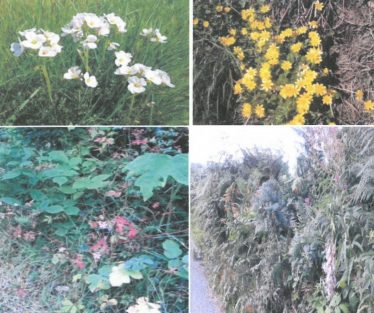 Hedgerow through the seasons 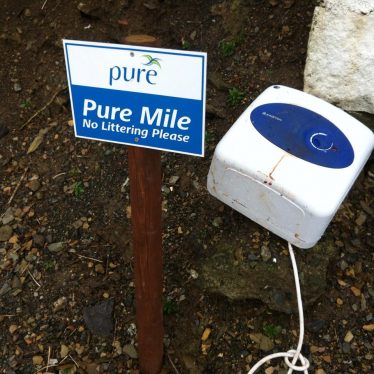