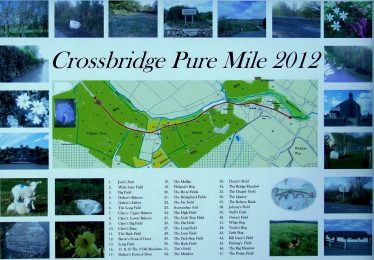 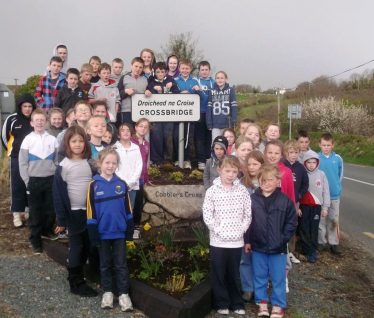 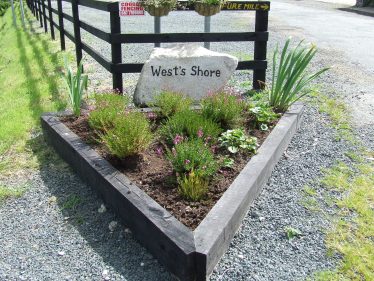 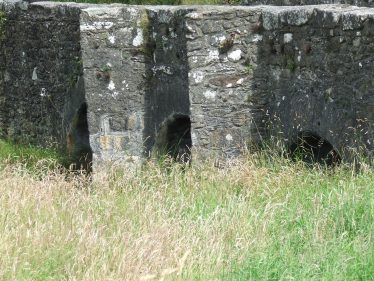 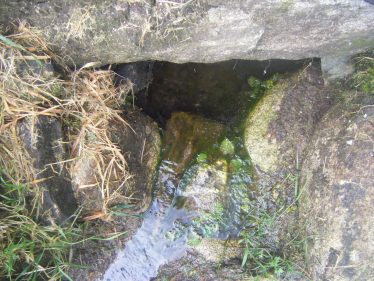 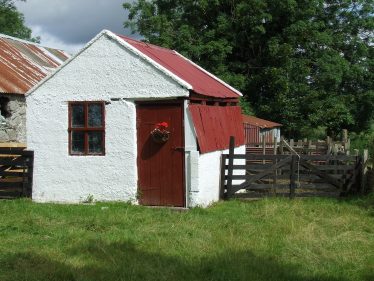 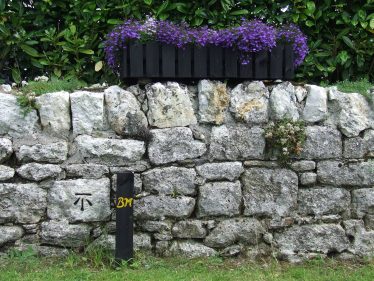 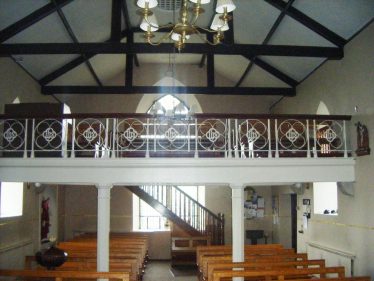 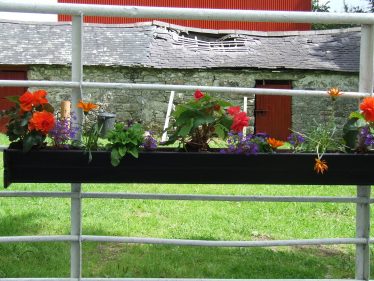 zoom
Old Farmhouse with Flowers in the Foreground
PURE Mile 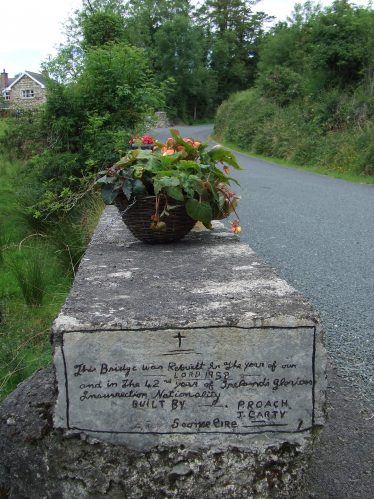 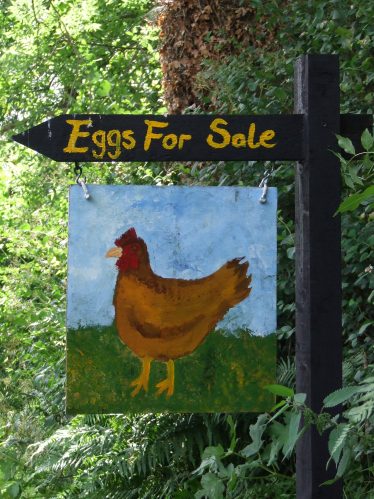 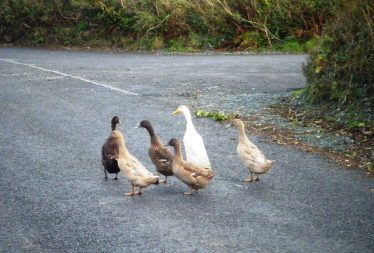 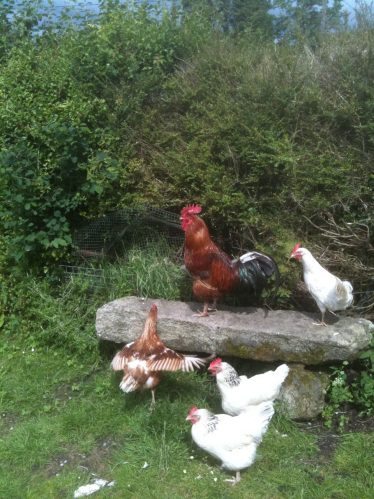 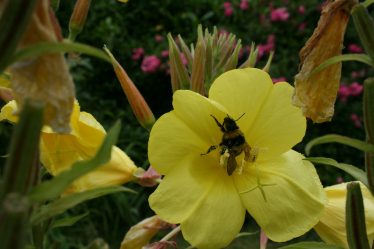 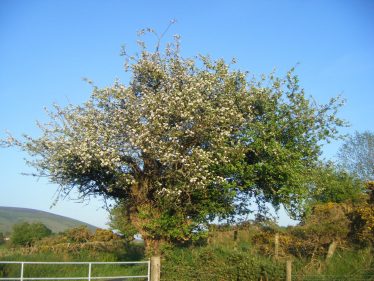 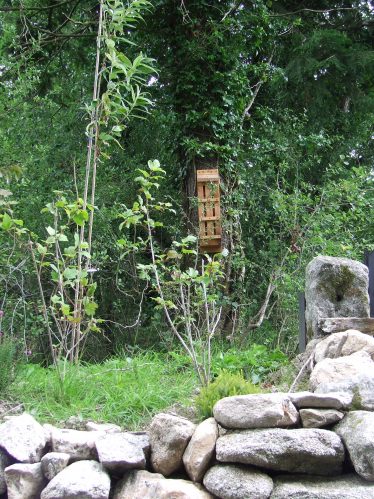 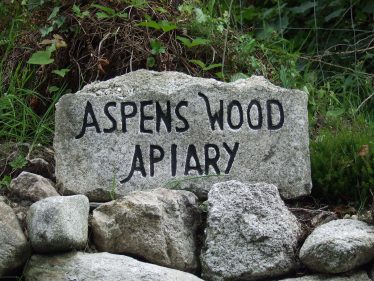 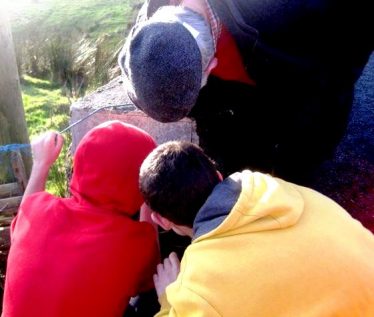 zoom
Three Heads are Better than One
Crossbridge Development Committee 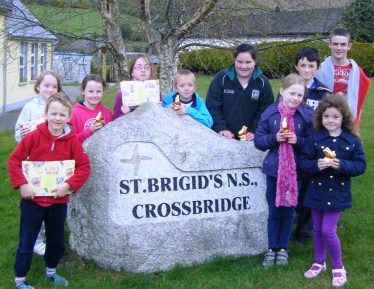 The Mile starts at Cobblers Cross and finishes at the Rath in Raheentiegue.

On a summit in Farnees the largest townland in the district of Crossbridge, on a slope to the Derry River there is an area called  “The Four Cross Bounds” so named because  four townlands meet and here and form a cross. These are Muskeagh, Farnees, Glenphillipeen and Ballyshonogue.

Crossbridge is probably an amalgamation of the townlands of Bridgeland and Cross which are two townlands separated by the Derry River. Bridgeland is small and measures 63 acres.  It lies at the heart of the community as the church, school and community hall are located here.

Along this mile there is are a large number of fields with names and these names may indicate some characteristic of the area, a past or present owner, current or previous land use. Some examples are  “The Bridge Meadow”, “The Crab Tree Field” and “Dalton’s Fallow”.

There are three benchmarks in the district.  These are stones with height markings. There is one near Mulhall’s land, one opposite Dalton’s field and a third one on Nealon’s garden wall.

These benchmarks were found when the community were improving the the Crossbridge area.  The markings on the stones indicate the height of the area above sea level.  Benchmarks were marks made in stone by surveyors. Levelling rods were placed in the marks on these stones.  Each Benchmark is shown on large-scale maps and they were used by the Ordnance Survey for valuation purposes circa 1842.  They are used to establish a “baseline” for their surveys.  When the baselines were established the surveyors used triangulation between mountain tops to create reference points for the country.  Every road, track, stone all, hedge, river and stream from Fair Head to Mizen Head was surveyed and mapped.

In the townland of Farnees there is a Rath called “Raheen a Goblin” measuring about ten meters in diameter.

There are also some stones with Ogham markings.  Ogham was a written language used by the Irish and the Picts from 5th to 7th centuries if not earlier. There are still some standing stones and the outline structure of the encircling ditches around the present church.

There was a corn mill in the area called Furlong’s mill which no longer stands but some of the mill stones were used to build St. Peter’s and St. Paul’s Church at Crossbridge. There was also a millrace on the Derry River to power the mill.  The farmers brought their corn here to be milled into flake or pinhead oatmeal.  There are reports of around twelve farmers carts at a time bringing their corn and ‘bringing home the field’.  Ancestors of the Furlong family remain in the area.

There was a hamlet called West’s Shore, where there was a hatters shop, a cobblers, a blacksmiths forge, a mantle maker, coin maker, carpenter and cooper.  Records show that there were dressmakers, basketmakers, thatchers and a tin smith.  The cooper made barrels, buckets, spinning wheels, tubs, pails and other utensils.  Mass paths were used through all the local fields to get to the church.

Darcy’s forge at the crossroads was credited with creating the current alter rails in the church.  It is said that tooth extraction also took place in the forge. At the forge cross roads there was a spring servicing the church, the school and the hamlet.  During hot weather people brought barrels on asses carts to deliver water to outlying areas.  This area, three or four generations ago was largely self sufficient.

The thatched chapel in Kilcromer was burned down in 1798 along with Kilquiggan and Hacketstown churches.  Where the community hall now stands a battle was fought and an overpowered Irish contingent was captured and transported in chains to Australia.

The local grotto was created from an indent in the local quarry.  Mass rocks have been found in the area.

There are two Coolattin type cottages built by the Fitzwilliam estate in the Mile.  At the back of these cottages there were yards built of granite stone and granite coins and small stone buildings used to house dry toilets. These have all been modified but an original one remains at No. 7 Quarry Road Shillelagh.

In a famous poem by Thomas Kinsella called “His Father’s Hands” an extract gives a popular film its title namely “The Wind that Shakes the Barley” and this poem also makes strong references to the Crossbridge area as the phrase quoted below shows:

“even the farmers had some other trade to make a living. They lived in Farnese among a colony of North of Ireland or Scotch settlers left there in some of the dispersals or migrations which occurred in this area of Wicklow and Wexford and Carlow”.

Birds in the area include the Greenfinch whose nest can be seen in the Autumn, the Chaffinch, the Heron which is popular in the Crossbridge area and feeds on frogs.  Animals include hares, bats and frogs

There are two farmers in the area who are in the REPS scheme and who have Riparian Zones which run along the river Derry.  They protect stretches of the river by creating linear buffer zones which are suitable for flora and fauna particular to river environments.  The river contains salmon, crayfish and pearl mussels.  Stiles and entry points are established

Two main tributaries which form the Derry River meet at Crossbridge and the Derry flows down to Kildavin where it meets the Slaney.  Two sources of the Derry River are Hacketstown at the foot of Eagle Hill flowing towards Tinahely and joined by stream which rises in Knocknaboley and divides Carlow and Wicklow passing beneath Ballinaquilky Bridge.  Then it joins the stream from Eagle Hill then they flow towards Red Bog and North for Crossbridge.  The other tributary rises near Knocknaboley in Keatings bog and flows towards Tinahely and then joined by another stream coming from Wholohans and other several streams which rise in Mullins and all contribute to the volume of water that flows by Crossbridge.

The Green Flag was awarded to the school. Among the green measures employed by the school are innovative water conservation methods such as the placing of cement bricks in the cistern’s of the toilets to take up space thereby reducing the amount of water used while flushing. The school also supported biodiversity by creating a log pile, a vegetable patch, grassland and compost area.

The Committee mended fences, gates and walls. They painted tidied, cut, renovated, restored, discovered and created. The school children entered colouring competitions, helped out on the clean up day.   An entrance to the Rath was created. The trees have bird bat and butterfly boxes.  Gates were refitted. Warning and information signs were erected.  Wells were uncovered.

There were 81 people living in Crossbridge in 2012.

Crossbridge was joint Overall Winner of the 2012 PURE Mile competition.