Our PURE Mile starts outside the Glenealy Lodge. Established in 1792, the village inn was traditionally called after its owners. At present it is known as Kings after its current owners the King family. Our journey begins where the Lucky Brook road joins the Rathnew Rathdrum road. There was a draw well at this point in the 1800s but it was filled in when the new road was laid around the 1850s. The River Ann flows under Glenealy Bridge. Looking down to your right on the bridge you’ll see a small development called ‘Chestnut Glen’ which was built in the ‘Pound Field’. It got this name as this was where stray animals were impounded until their owners paid a fee to have them released. Prior to this, the site was the location for the new Lager hall. The original hall was built further up the hill on the right in Armstrong’s yard around the time of the Boer War. The origin of the word lager is South African meaning community and returning soldiers from the war adopted it for their community hall. The original hall fell into decay and the new Lager Hall was subsequently built. There was a strong emphasis on Irish with Gaelic League Irish classes and Irish literature. Douglas Hyde, who later became president of Ireland, was one of the teachers. 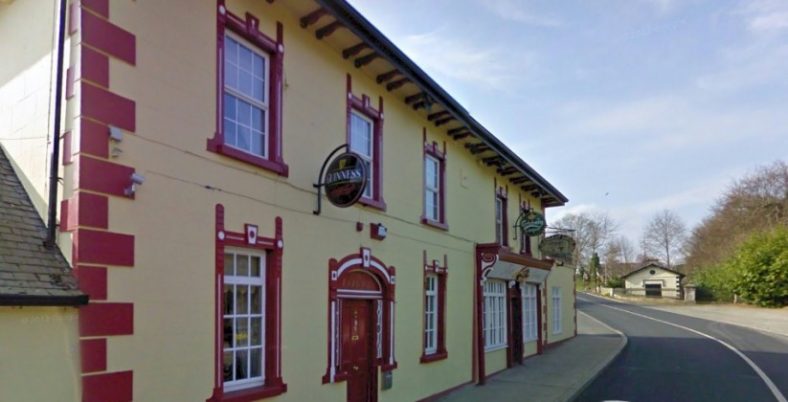 Slightly further up on the left hand side of the bridge if you look closely you can still see the number ’22’ chiseled out in the stonework; this represents the distance to Dublin in Irish miles. It was on this bridge that Daniel Cunniam was put to death. One evening (the story goes) he was returning with a cartload of straw when he was attacked by a band of British soldiers. He refused to give the whereabouts of a priest who was in hiding and was subsequently sentenced to be hanged and burned by order of a Captain Gee.

If you look up from the bridge, to your left you can see the top of the Church of Ireland above the tree line. Built in 1791 and it was consecrated in 1792. The land on which it was built was given by the Tighe family who were local landowners. The interior is based on St. John’s College, Cambridge and is built like the choir area of a cathedral with the pews facing each other across the aisle and the back rows having recesses and canopies. 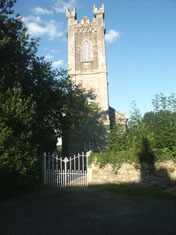 Towards the top of the hill on your right is Armstrong’s yard, the site of the old Lager Hall where there used to be a bakery. Continuing up to your right and round the corner is Glenealy Catholic cemetery on the right hand side. It comprises of three sections, the new section, the old section and the Sailors’ graveyard. In the original old section, lie the ruins of the church which was burnt by Oliver Cromwell during his rampage through Ireland on his way from Drogheda to Wexford in 1649.

In a further incident, one of the old headstones has a hole through it caused by a musket ball fired by British yeomen at a United Irishman in 1798, who was taking cover behind it.

As you turn around and back and up Chapel Lane you’ll see the entrance to the Church of Ireland and the schoolhouse which was closed in 1909 and is now a private residence. A few yards up on the same side is the ‘Rectory’. This was built as the residence for the vicar in the late 1700s shortly after completion of the Church of Ireland. The church ceased to be a separate parish in the early 1930s and the ‘Rectory’ was then rented and later sold. It is now a private residence.

Across the lane a temporary mud walled church was built to replace the Catholic church Cromwell destroyed. Stones from the church were used to build some of the Land League cottages on the right hand side. The base of the granite holy water font from this church is still there being used as a planter in the garden of the first cottage. 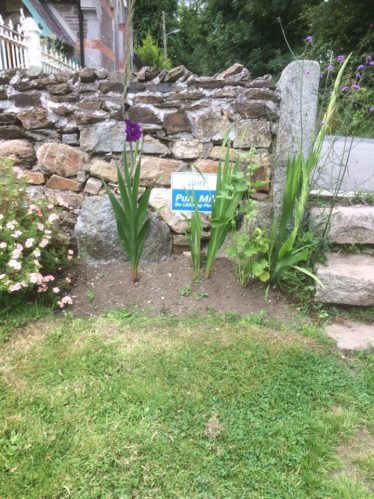 Our PURE Mile ends at the entrance to the forests on Carraig Mountain now owned and managed by Coillte. Forestry around Glenealy is well documented as far back as the 1750s. At the forest entrance there used to be a large sawmill owned by the Tighe family who would have owned most of Glenealy and its surrounds into the early part of the 20th Century.

Chapel Lane is part of an old mass path, which is believed to stretch all the way from Castletimon in Brittas Bay to Glendalough.