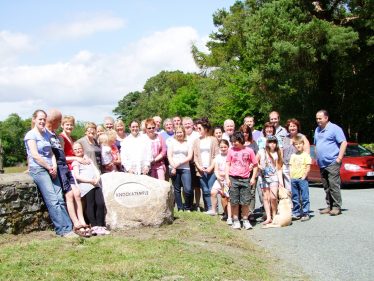 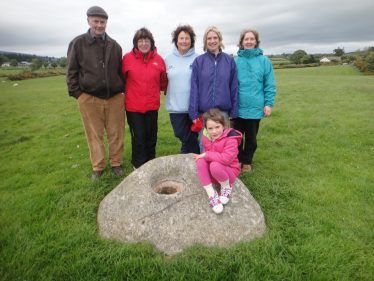 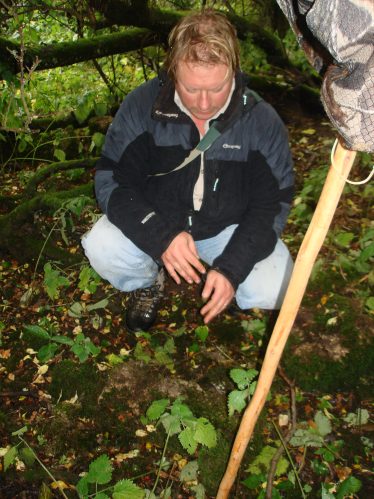 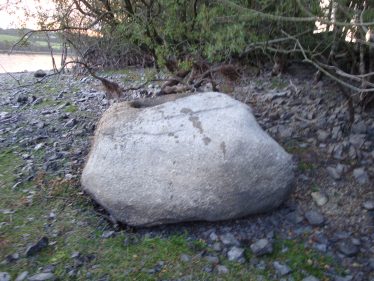 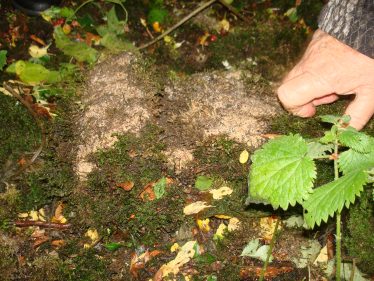 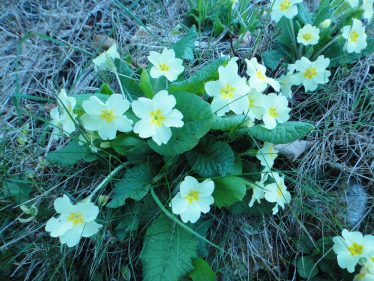 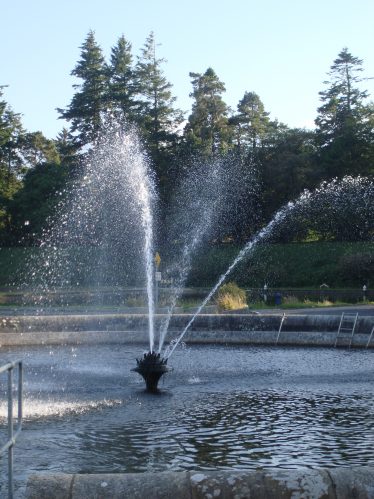 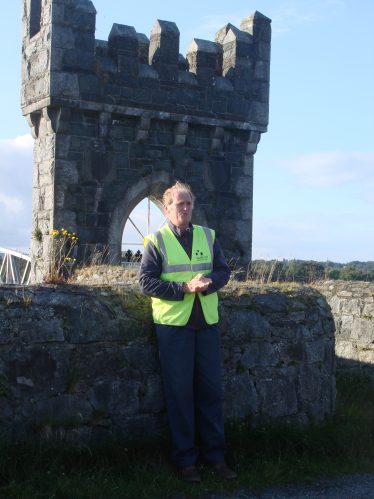 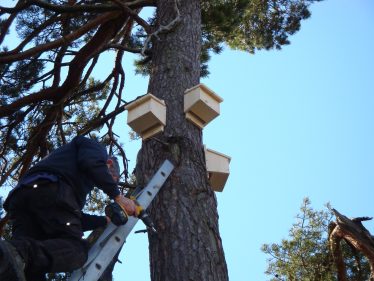 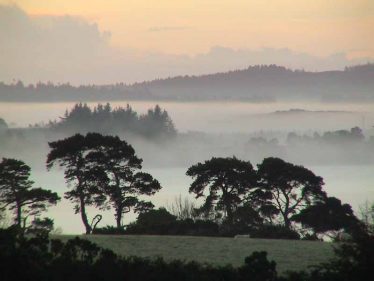 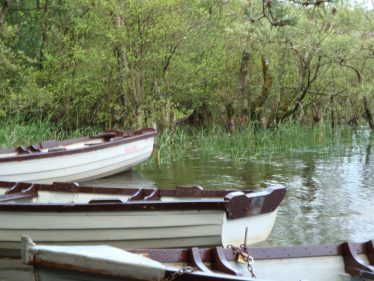 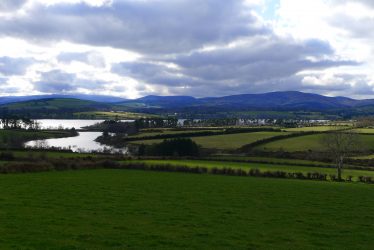 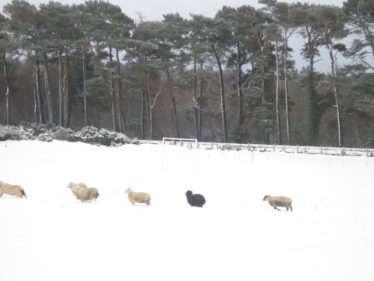 zoom
Along the Pure Mile

The Knockatemple Mile is the road leading from Knockraheen to Knockfadda encompassing the townland of Knockatemple. This townland borders on the Vartry reservoir, which supplies water to South Dublin and North Wicklow.

The Vartry Mile starts at Water’s Bridge east of Roundwood on the Newtown Road.  It begins with the strategically important Vartry reservoirs. The earthwork dam which forms part of the waterworks was highly acclaimed and was included in the American Scientific Journal by Mr. David Gravall. The water flows generate electricity, some of which is incorporated into the National Grid.

According to Liam Price the word Vartry could be derived from the territory called Fertir or Fartry, meaning fortress or large rath.  This rath could be the one recorded on the OSI 6” map at Glasnamullan. The lower reservoir was completed in 1868 and the upper one in 1923.

Knockatemple is one of the smallest townlands of the county and it means the “hill of the church” and its name comes from the presence of Knocktemple church, which is a recorded monument, said to have been one of three churches founded by the sisters of St. Kevin of Glendalough in the 11th century.  The sisters were called Keene, Kine and Keelagh and the churches were Derrylossory, Dergory and Knocktemple. There is a medieval holy water font cut into a large rock about 70ft north of the church ruin site.  It fell into disrepair in 17th century with the enactment of the Penal Laws.

There are three bullaun stones in the vicinity, one on the banks of the reservoir, one close to the church and another at a house in Knockraheen.  Bullaun stones are often found at monastic sites; they could have been used to grind herbs or cereal. Folklore knows them as ‘curing’ stones or ‘cursing’ stones.

The many field names in this Mile relate to its history, topography, uses and family associations.  These include ‘Church Field’,  ‘Sandbank Field’,  ‘Rot House Field’,  ‘Redbank Field’ and ‘Bridie’s Field’.

The Vartry reservoir is a proposed Natural Heritage Area.  This is the basic designation for an area considered important for the habitats present or which holds species of plants and animals whose habitat needs protection.  The reservoirs have developed a diversity of habitats from wetland vegetation to heathland and woodland.  Some of the plant species found here are relatively rare in eastern Ireland.

Historically many of the hedgerows in the area were planted from 18th century onwards following the enactment of legislation requiring landowners to enclose their lands.  The hedgerows are a refuge for bird and animal species.  They are used during the breeding season.  Hedgerows provide nesting sites for birds as well as seeds and berries.  Birds show reluctance to cross open fields and therefore use the hedgerows as links between feeding sites.

Birds of prey found nearby include the red kite, long eared owls, sparrowhawks and kestrels.

On the lakeside the mute and whopper swans can be seen.  The usual wetland water birds are found here and a rare species of duck called the Great Crested Grebe were nesting very close to Water’s Bridge at the start of the Mile. This site is used every year for the Irish Wetland Bird Survey which monitors wintering water bird populations.  The most common duck found are mallard, widgeon and teal.

An area of wet woodland provides a habitat for a diverse range of ferns, liverworts and mosses.  Tadpoles and frogs inhabit this area called Bawn Bog in early spring.  Bluebells carpet the wood in springtime.  Fallen and standing rotting timber provides a microhabitat for beetles, weevils and other wood-eating invertebrates. Fungi which absorb decaying matter from dead plants can be found here as mushrooms or toadstools.

Fishermen report sightings of otter on the lake.  There is evidence of badger throughout the woodland areas.  A large animal was heard in the undergrowth during a bat walk.  Traces of foxes, hares, deer and rodents were very evident during snowfalls.    Many of the small animals crossed frozen areas on the lake.  During a bat walk several different calls were heard and a bat detector was used. Five species of bat were identified namely Daubenton, Leisler, Common Pipestrelle, Soprano Pipestrelle and Whiskered.  Bat boxes were erected, they are social animals and congregate in large numbers. A resident spotted a red squirrel in October 2009.  Stripped pinecones, which are evidence of the presence of squirrels, are visible on the ground.   Many people believe the decrease in the Red Squirrel population is due to the Grey Squirrel, however, the situation is more complex. Red Squirrels prefer large coniferous woodland whereas the Grey Squirrels prefer mixed and broadleaf woods.  The Grey Squirrels fill the vacuum left by the Red Squirrel decline.

Flora found includes Meadow Sweet, Pennyworth, Herb Robert, Nettle, Rosebay willow herb, Rush, Speedwell, Violets, Primrose, Cowslips, Ivy, Docks, Stitchwort Ferns, Umbellifers, Herb Robert, Lessser and Greater Celandine.  Although some of the varieties may be considered a nuisance, they nevertheless play an important role in the web of life for many native species.  The nettle is host to the larva of many butterflies and moths.  Ivy is a hibernation space for butterflies and bats.  Bramble fruit provides sustenance to insects, birds and mammals.

Grasses and non flowering plants appear in abundance .  Trees are represented by a wide number of species for example the Holly, Hawthorn, Blackthorn, Alder, Willow, Wild Cherry, European Larch and the Oak and Sycamore.

Hazel and birch coppicing appears on the route, which is an ancient form of woodland management.  Coppicing is the regular cutting back of trees or bushes in a sustainable cycle and provides a rich variety of habitats.

Vartry were the 2010 winners of the Pure Mile – Best Litter Free Award and the Best Natural Heritage Award.

Knockatemple were the 2011 winners of the Pure Mile – Best Natural Heritage Award.