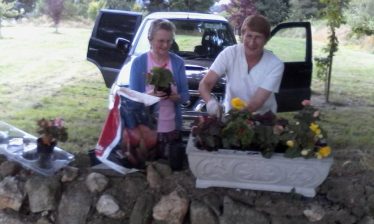 The PURE Mile group consisted of Chapel Lane residents, the Grotto Committee and the Church Committee. Regular litter picks were conducted and constructing a large compost heap to clear existing random ones which existed in the Chapel Lane Estate and Chapel Grounds. The Pump was painted at the start of the mile together with some gates. A wall was constructed opposite the church while some new flowers were planted while maintaining the existing flowerbeds.  The following is an extract from the  pamphlet issued by the group for Heritage Week, 2013

History of the Shillelagh Union Workhouse and Fever Hospital

Following the 1838 Poor Law Act, Ireland was divided into 130 administrative Poor Law Unions. Each Union was run by a Board of Guardians, whose main work was to erect and maintain a workhouse in their respective union. This was financed by a local levy or rate on landowners. Shillelagh Union included southwest Wicklow and east Carlow and was made up of nineteen electoral divisions – Tinahely, Carnew, Ballingate, Killinure, Cronelea, Shillelagh, Coolattin, Coolboy, Ballybeg, Ballinglen, Kilballyowen, Kilpipe, Coolballintaggart, Munny, Aghowle, Rath, Clonegal, Clonmore and Hacketstown.

The Shillelagh Union Workhouse was built in 1840-41 for a cost of £7,394. It was situated on a six-acre site half a mile to the south west of the village with an annual rent of £8. The Workhouse opened its doors on 18th February 1842, with accommodation for 400 people.

Built like other workhouses, to the design of architect George Wilkinson, it consisted of three blocks. The admissions building contained the porter’s office, probationary wards and the Guardians’ boardroom; behind was the main building, also known as the able-bodied quarters. It housed the dormitories, school and dayrooms and master and matron’s accommodation. The third block contained the infirmary and lunatic wards. The dining hall, which doubled up as the chapel, connected the main building with the infirmary. Kitchens and washrooms were in an annex behind the main workhouse. The whole complex was divided into male and female compartments and surrounded by high walls.

The Famine created an unprecedented demand for workhouse places and by January 1847, Shillelagh Workhouse was declared full. Admissions reached an all-time high in February 1850, with more than 800 inmates recorded as receiving relief in Shillelagh.

By early 1847, fever had reached epidemic proportions all over the country. Due to the lack of accommodation in the workhouse, new admissions, whether sick or healthy, were crowded into already full wards, leading to the rapid spread of disease. Patients presenting with fever at Shillelagh Workhouse were sent to Carnew Fever Hospital but by 1848, a fever hospital had been erected to the south of the Shillelagh workhouse.

County Wicklow mortality rates doubled during the Famine. From June 1841 to 30 March 1851, deaths from infectious diseases in the Shillelagh Workhouse and Hospital numbered 335 – 194 of which were male and 141 female. As well as famine fever, cause of death was attributed to smallpox, influenza, dysentery, diarrhoea, scarlatina and whooping cough. Few deaths were ascribed to actual starvation.

The Irish Poor Relief Extension Act of 1847 empowered the Guardians to acquire land adjacent to the workhouse for use as burial ground for deceased inmates of the workhouse and hospital and in Shillelagh, the graveyard was situated behind the Fever Hospital.

The 1851 Medical Charities Act established a network of local dispensaries funded by the poor rate and administered by local committees composed of Guardians and resident property holders. This represented a major advance in the provision of medical services in Ireland, bringing a medical officer into every district in the country and offering free medical treatment outside the workhouse. The Act improved access to vaccination by greatly increasing the number of outlets, thus reducing the distances parents and children had to travel. Due to the slow take up however, vaccination in the child’s home became an option after 1858 and compulsory vaccination was introduced in 1863.

By the late 1850s, social and economic conditions throughout the country had improved, and with the population reduced by famine, disease and emigration, workhouse accommodation was at 1% of the population. The decrease in numbers after the famine and the changeover to the more humane system of outdoor relief, led to better conditions within the workhouse.

Guardians began to enlarge their infirmaries, especially as many post-Famine inmates were chronically ill. The role of the workhouse changed and it became more of an institution for the old, the sick, the mentally ill and vagrants. Poor, but not destitute persons could now become ‘paying patients’ and were exempt from wearing the workhouse uniform. In 1861, the proportion of sick to healthy inmates in the Shillelagh Workhouse was 1:6.4 and in 1871, 1:3.7.

Pauper children were a focus of particular concern in the post-Famine period due to the large number of orphan and deserted children in Irish workhouses. The Poor Relief (Ireland) Act of 1862 gave powers to the Boards of Guardians for their boarding out. Foster families were usually of the labourer and small farmer class and were paid about £5 a year. Between August 1862 and January 1873, 34 orphaned and deserted children were fostered out in the Shillelagh Union.

By the end of the 19th century what had been a established as a method of deterrence, intended to relieve destitution alone, had evolved into a broad based welfare system encompassing not only poor relief, but medical care, sanitation and social housing.

Emigration became a permanent feature of Irish life during the Famine and between 1845 and 1854, thousands of people emigrated from Ireland to the US, Canada, Australia and Britain. Some of the emigration was officially assisted. For example, the Poor Law Commissioners initiated a scheme to send Irish workhouse girls to Australia in 1848, which included 22 girls from the Shillelagh workhouse.

60 people emigrated to Quebec from the Shillelagh workhouse between May 1850 and March 1851. The low level of emigrants from the workhouse was due to extensive landlord emigration from the Fitzwilliam Coolattin estate between 1847 and 1856. About 850 families left or were cleared off the estate. These emigration schemes were known as ‘shovelling out’ the tenants because of the practice of `throwing down’ or demolishing their cabins. While the majority was glad to accept the offer, not all tenants agreed to go and were prepared to accept the prospect of the workhouse or the `scalpeen’ made within the ruins of the tumbled cabin.

The Shillelagh Workhouse in the 20th Century

The workhouse remained essentially unchanged in the early years of the twentieth century despite the best efforts of the Irish Workhouse Association to improve conditions. The punitive character of the poorhouse became less pronounced, and more attention was paid to the quality of care. However, the negative image of the poorhouse still clung.

In January 1900, the population of the Shillelagh Workhouse and Fever Hospital was 138 and by January 1920, the population had dwindled to 68. Patients continued to be elderly people without family support, the chronically and mentally ill, and unmarried mothers.

In November 1921, the Guardians were requested to make arrangements for the immediate closing of the Shillelagh workhouse. Under the Wicklow County Scheme Order, aged and infirm persons, chronic invalids, and expectant mothers were sent to the Rathdrum County Home (formerly the workhouse). The remaining able-bodied adults and the children were boarded out. The Shillelagh Fever hospital became the county fever hospital for the treatment of infectious and contagious diseases.

The Minutes of the Guardians’ final meetings of 1921 record a request Tor permission for the schoolroom or other suitable apartment in the workhouse in which to conduct Gaelic classes a couple of evenings weekly. It was also decided to grant a room adjoining the boardroom to local people for a reading room. The use of the boardroom for a conference of the Transport Workers’ Union was also allowed.’

Furthermore, it was agreed in 1921 ‘to grant the inhabitants of Shillelagh the use of the workhouse chapel, subject to an arrangement being made with the parish clergyman to conducting weekly services there’. 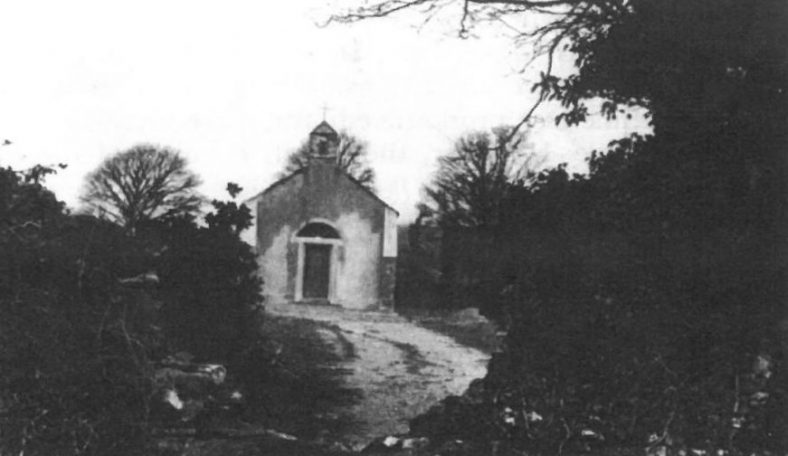 By 1947 the workhouse buildings had been sold for demolition, with the exception of the original workhouse dining room/chapel. The building was renovated and consecrated as the Church of the Immaculate Conception in 1948. Up to then, Tomacork, some miles south of the village, had been the Catholic parish church.

The Marian Year of 1954 was a high point for Marian devotion in Ireland. This devotion was reflected in the construction of grottos including that in the Shillelagh Union Graveyard.

The Golden Jubilee of the Church was commemorated in 1998 and a memorial stone remembering those who died in the Union Workhouse was unveiled in the Millennium Year. 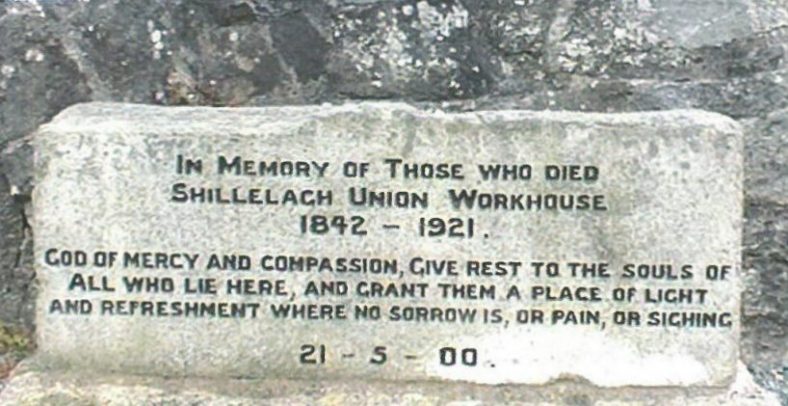 Over the past years, the Fever Hospital site and graveyard became overgrown and neglected. Local resident, Annette Nolan of Chapel Lane, decided it was time to bring the area to the attention of the Wicklow Heritage Officer, with a view to improving and developing it as a heritage site.

Annette approached Wicklow County Council who has accepted responsibility for the area. Council workers have recently cleared much of the overgrown vegetation, planted trees and have agreed to maintain grassed areas in the future.

Local community volunteers were sought to help restore the existing wall of the graveyard and to build a remembrance wall made from stones from the original buildings, where names of loved ones may be inscribed.
To coincide with the Year of The Gathering and the start of National Heritage Week 2013, a remembrance stone was placed and inscribed to mark the unveiling of the Remembrance Wall on 17th August 2013. Following submission to the National Heritage Week Awards, the project was placed as a finalist/runner-up in the Most Innovative Event’ category.

A Credit Union account ‘Shillelagh Grotto Heritage Project’ has been set up in Carnew for anyone wishing to make donations/contributions for further enhancement of the site. 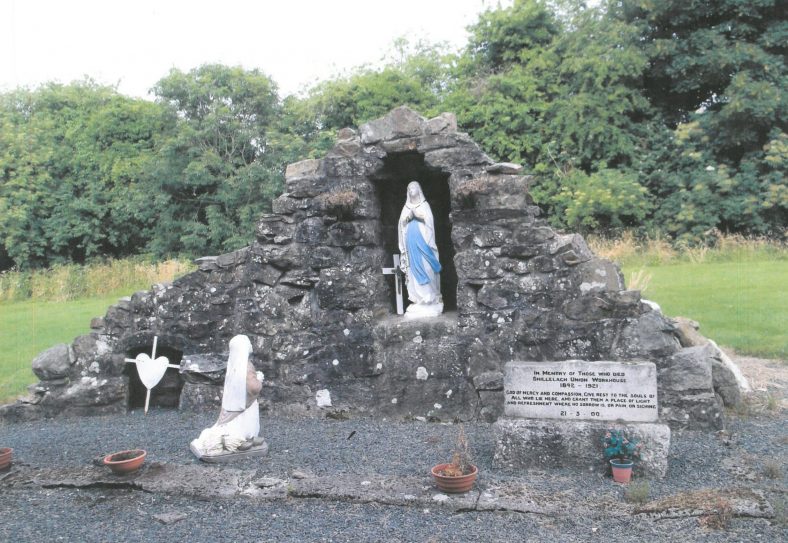 J. O’Connor The Workhouses of Ireland – The Fate of Ireland’s Poor