You are here: HomenextPlacesnextCOOLATTINnextBrief History the parishes of Annacurra/Kilaveny in the Barony of Ballinacor (South) 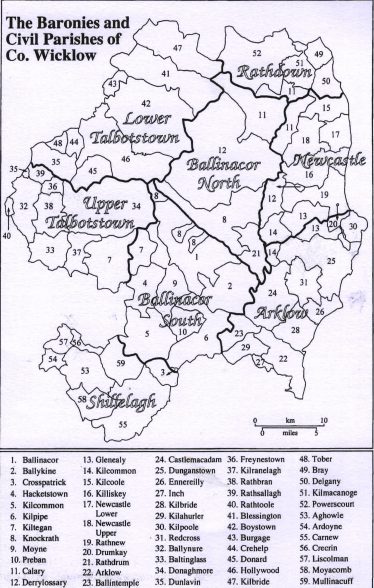 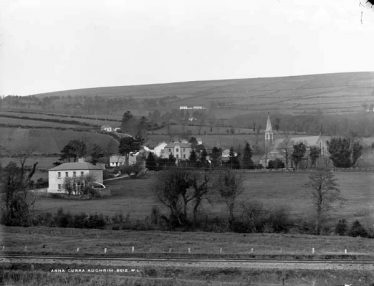 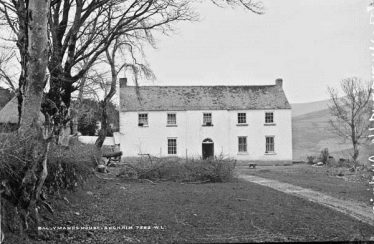 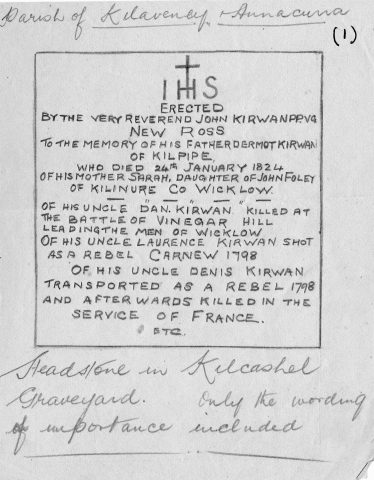 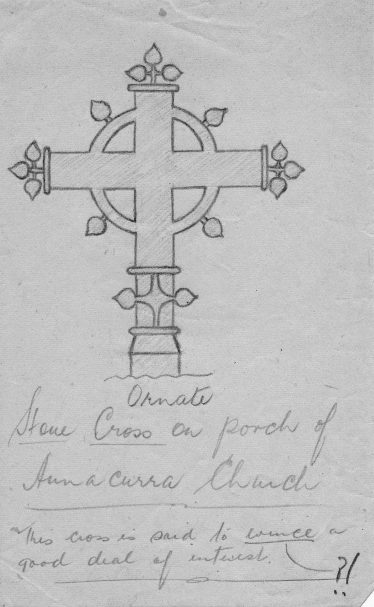 This article has been compiled for the Heritage Office in Wicklow using sources including the Irish Tourist Association Topographical and General Survey 1943 (ITA)- Barony of Ballinacor (South) and Lewis’s Topographical Dictionary 1838 as baseline information.

Other sources include the NLI.

Annacurra and Kilaveny are Roman Catholic Parishes containing the Civil Parishes of Preban (part of) and Kilpipe (part of). These Catholic parishes cover an area of about 180 sq miles.  This area stretches from Coats Bridge which is 2 miles east of Aughrim to Crossbridge district which is about 4 miles beyond Tinahely.  In width it stretches from Ballymanus to the Wicklow Gap on the Wicklow – Wexford border.

The outstanding places according to the ITA survey are the hills around Ballymanus, the valley of Ballinglen as seen from Kilaveny Church around Kilcashel to the Wicklow gap, the Croghan mountain area as far as Clone.  The diversity of scenery ranges from densely wooded land to bare rugged mountain slopes.

Preban is a parish in the barony of Ballinacor.  This is situated on the SE bank of the river Derry.  The land is good and according to Lewis in 1837 the system of agriculture was improving.  There were a number of “big” houses including Tankersley and Ballinglen which had views of the Derry valley and the Croghan Mountain. There was a nearby flour mill.  There was a vicarage here which was in the diocese of Ferns and a rectory vested by the “Church Temporalities’ Act”.  The church in Preban was said to be in the ‘early English style’ with an embattled tower crowned with pinnacles built in 1827 by the then extinct ‘Board of First Fruits’. A school house was built in 1825 by Coates who lived in Tankersley House. There is a record in Lewis of a two urns being dug up here in 1832 containing human bones.

Kilpipe church is built of stones of various sizes and it may be possible to date it by its inner arch which is rounded, it extends practically to the width of the church but is not of true Romanesque design. Behind the arch two walls curve around to finish the structure. Each wall has a couple of windows as has the rounded end.  The graveyard contains graves of both Catholic and Protestant and the gravestones date back to the 18th century.  In the same field as the church there is a ‘good specimen’ of a motte which rises to 35ft above a small stream.  There is a moat surrounding this.  Kilpipe is located to the left of the Aughrim/Tinahely road starting at Annacurra and extending a couple of miles west of it. According to the ITA – in the chapel of Annacurra there is an old chalice which is still in use and inscribed on it is “presented to the Parish of Kilpipe, 1809”. However there was no Catholic parish of Kilpipe. There are ruins of an old church of Kilpipe before this time and it was Protestant from the time of the later stages of the Reformation.  This inscription cannot be accounted for.  In the 1940’s the chalice was still avaiblable for viewing.

Kilcashel Graveyard is out of the way and is on the SE end of the parish of Annacurra.  There is a headstone erected by Revd. John Kirwan to his ancestors most of whom were associated with the 1798 Rising. This graveyard is about 7 miles east of Tinahely and about 5 miles east of “The Tocar” in the townland of Kilcashel on the road to the Wicklow Gap.  A drawing of this gravestone was included in the ITA survey in 1943. See scan.

There is a graveyard surrounding Kilcommon Church about ¾ of a mile from Tinahely.   The eastern side of the graveyard was for Catholics and the western side was for Protestants.  It was still in use when the ITA survey was completed and belonged to the Church of Ireland.

The last graveyard is about ¼ mile below the RC Church at Kilaveny, in the townland of Whitefields where the road branches from the main Tinahely/Aughrim road up to Kilaveny.  This place is very old although there is no evidence of this but it is said that there was a chapel here but that it was burned down “in troubled times”.

In the parish of Annacurra there are a number of raths.   There is one of note according to the ITA in Crossbridge about 4 miles west of Tinahely.  It has a diameter of about 100ft and the outer bank averages about 5ft. in height.  Some say that there was a church and graveyard within the rath as there are ‘faintly visible remains of foundations of a building and a number of stones which may have been headstones, one standing about 3 ½ ft. high.

Another ratheen is located about two miles from Annacurra on the Tinahely road.  It measures 100ft in diameter and has a bank of about 4 ft. high.  It was at the time of the ITA recognisable as a circle of pine trees.

One is also located at Ratheenteige about ¾ mile beyond Crossbridge on the 1st road to the left after passing the chapel. This raheen (a small rath)  has been cut in two and the road runs through it.

High on the mountainside at Brehan to the right of the Annacurra-Preban-Kilaveny road there is a rath similar to the others but the diameter is larger.  It necessitates a great deal of climbing and local knowledge may be needed to find it.

There are the sites of two castles in this area. First one is at Kilpipe in a rocky ravine about ¼ mile above the road going to Tinahely and 3 miles from Annacurra.  Nothing remains of the castle.

Another one was located at Tocer about 2 ½ miles east of Tinahely, just below Kilaveny Chapel.  No trace of this remains either however references to it may be found in the Journal of the Royal Society of Antiquities Volumes 63 and 66.

This was once used as a jail where insurgents were detained at different times.  The ITA said that it was used in 1943 as a shop and that the upper story was a school.

About two miles SE of Tinahely there is the site of a battle fought in 1798 between the ‘insurgents’ and the Yeomen.  This place is called Mount Pleasant and it was used as a camp for some time by the’insurgents‘.  The actual encounter here was probably small and Billy Byrne of Ballymanus is believed to have been the leader here.  It is known to have been on ‘O’Sullivans land’.

Dandy’s Rock is situated in another field on the western extremity of the town of Tinahely.  It was a meeting place in earlier times for politics and other reasons.  It is said to be known locally.

Billy Byrne is reputed to have been a courageous leader in 1798 and some of his deeds were woven into stories and songs.  This house is situated high on the hillside at Ballymanus about 3½ miles from Aughrim.  It was/is a plain two storey house white washed with a slate roof.  According to the ITA a plaque was put over the door commemorating Billy Byrne. The Bray People newspaper on 30th November 2012 said that he served in the Newtown Mount Kennedy Yeoman Cavalry from 1796 until he joined the United Irishmen in 1797 and became a leader in the 1798 rising.

This consists of the ruins of a number of stone cellar walls built below the surface.  This was the beginnings of a hunting lodge ‘Coolross’ for Thomas Wentworth Earl of Stratford who was one of the Fitzwilliam family who were large property owners in the Wicklow area.  It can be found by going to the top of the main street in Tinahely turning sharp left down a lane and going about 400 yards to an iron gate and the ruin is facing the gate at an angle to the lane.  The ruins are about 30 yards beyond the gate and may be obscured by long grass.

The celebration of a Saints feast day was called a ‘pattern’ day and most parishes had a patron saint.  The word ‘pattern’ derives from the word ‘patron’.   There are four holy wells in the parish which had patterns in earlier days but as of the 1940’s most of them had ceased except for Tobair Patrick.  As St. Patrick visited Wicklow this is associated with him and it is situated 5 miles east of Tinahely on the road through the Wicklow Gap to Inch or Gorey. The name of the townland is Tobair Padraig and the well is a few yards off the right hand side of the road at the bottom of the hill beyond the house.  There may be access there still.

A second well exists at Preban called St. Mogues Well which is situated about half way between Annacurra and Kilaveny on the back road.  St. Mogue is particularly well known around Wicklow and Wexford and the Well is in a field.  In the 1940’s there was a stile and path leading to it and it is about 200 metres west of the church.  There is a thorn bush growing above it. When there were patterns in the district the bush, as is common with these types of bushes near Wells was covered with old rags etc., The remaining two other wells are were deemed to be in honour of St. Brigid. One is in the townland of Rednagh about 2 1/3 miles from Aughrim on the road to Ballymanus.  It is in a plantation owned by the Forestry (probably now Coillte) and not well known locally.  It is a very small well with a stream running from it to the road but not visible in summer.  Many years ago there was a pattern to it.  St. Brigid’s well, Tinahely, is at the Western extremity of the town. It is about 20 metres from Dandy’s Rock.  It had a bush and rags tied on by pilgrims.  The water was believed to have cured toothaches.

In 1943 there was fishing for brown trout on the Ow River which runs through Aughrim from April to July. Angling was free.  Foxhunting was conducted by the “Coolattin hounds” group.  There was excellent grouse, partridge, duck shooting on nearby preserved bog.  The Crossbridge GTC and the Annacurra GFC were in place.  The Fair Green Tinahely had a handball alley.  Billiards took place in the local hall at Annacurra.  A local gymkhana was held every August. In Tinahely there was ‘good’ fishing for Brown Trout on the Derry River which flows through the town.