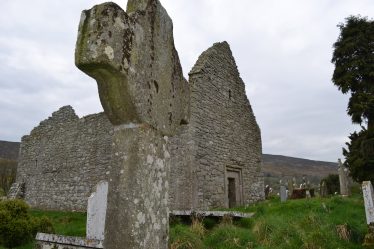 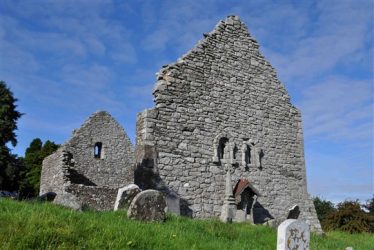 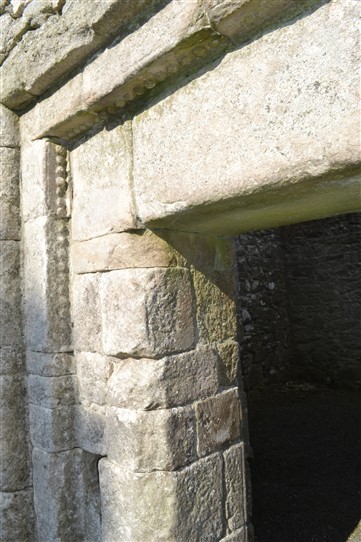 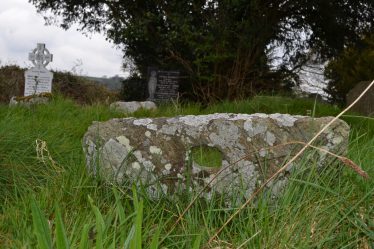 zoom
A Mill stone used as a gravemarker
D. Burns 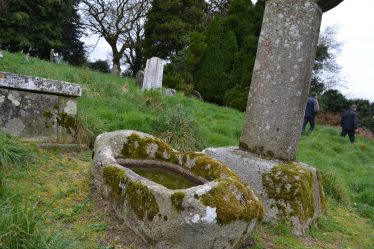 zoom
A water font in the graveyard is reputed to cure ailments
D. Burns

Aghowle has had many legends associated with it. In ancient times there were many ring forts and burial places in the area, the most well known being the wedge grave, ‘Labhanasighe’ or the bed of the fairies just a few fields away which was badly damaged in the 1800s by an attempted excavation and later by people who believed that there were large stores of gold buried at the site.

When St Finnian was looking for a site to build his monastery on, he initially picked the site of the ring fort on the top of Barnacashel Hill. The stone which he placed there was moved to an orchard at the bottom of the hill during the night. It was said by angels he replaced the stone on the hill three further times and each time it returned to the orchard.

St Finnian approached the owner of the orchard and was given a cold reception. He then went to the King of Leinster who ordered the man to give up the orchard to Finnian and the offer of better land but he still refused. There was then a war between the men of Leinster and the men of Ormond during which the owner of the land lost his arm in battle. A hawk picked up the hand and dropped it on the site in Aghowle which fulfilled the prediction of a local wise man some time earlier.

St Finnian built his settlement among the apple trees. There was not a lot of water on the site so the industrious monks built wooden lined drains that brought the water from the hill by gravity to the monastery. Parts of this construction were dug up by local farmers reclaiming land on the hill in the 1980s and are now in the National Museum of Ireland.

It was said there was a solid gold bell in Aghowle which could be heard for miles around as far as Clonmore. It is also said that there was a great rivalry between Aghowle and Clonmore and that when Finnian was leaving to set up a new monastery near Baltinglass that he took the bell with him. It was then supposed to have returned to Aghowle by its own accord. The next time it was moved to Clonmore, but once again returned to Aghowle. So there it remained but has been missing for several years. It is believed to be buried in a secret location and on quiet days can be heard ringing underground. Other accounts say people have heard mysterious bells in the area at night. They say it rings once every seven years.

St Finnian moved from Baltinglass to Clonard in Meath but the roots of his first church remain in Aghowle. There is now an annual mass there in July. Church of Ireland services were held there regularly until 1716 when St Michael’s church was opened on the road to Coolkenno village and has just finished celebrating its 300th anniversary.

Some families still have burial rights at the old cemetery. It is known as ‘the Mill of Purgatory’ and there is a hole on the east wall in which you can hear the mill running. It is said the next person buried there replaces the last as master of the mill and while the mill runs there will always be burials in Aghowle. Just inside the walls is a stone water font in which it is believed that the water used by bathing can cure warts and verrucas.

With its spectacular views and great legendary status, Aghowle is well worth a visit.