You are here: HomenextPlacesnextCARNEWnextDaniel Somers 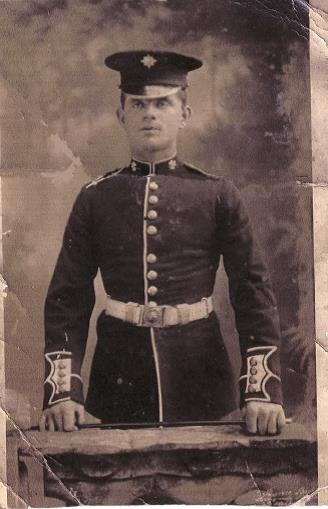 Born in Croneyhorn, Carnew, Co. Wicklow Daniel enlisted in the Irish Guards while working in Scotland. He was regarded as a great marksman.

He was deployed to France and was appointed the duties of a sniper due to his remarkable ability to handle firearms.

On the 30th October 1915 he was seriously wounded in his left leg, arm and eye. He was sent to the base hospital and from there to a London hospital where he died from his injuries. Private Daniel Somers was 27 years of age.

Due to the respect Daniel was held in by the military his remains were returned home to Ireland.

His remains arrived to Shillelagh railway station where they were met by a large crowd.

Daniel’s funeral was attended by a large crowd also reiterated the respect Daniel and his family were held in.

Daniel is remembered with Honours in Tomacork Cemetery.